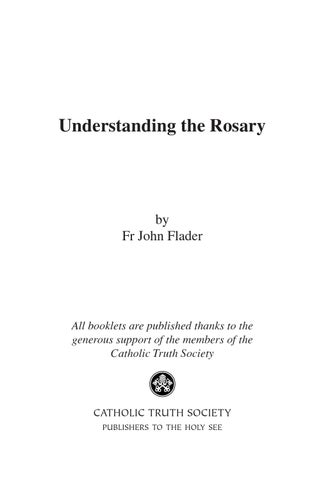 Introduction If there is a â&amp;#x20AC;&amp;#x153;badgeâ&amp;#x20AC;? or distinguishing mark of Catholics it must surely be the Rosary. Search in the purse of a Catholic woman and you will invariably find a Rosary. Look in the pockets of a Catholic man and there it is. It is even to be seen dangling from the rear vision mirror of countless cars. Go to a Catholic church early for Mass or stay late and you will find people praying the Rosary. In the old days you would even see people saying it during the Mass itself. Not a recommended practice, but it does testify to the ongoing popularity of the Rosary. There are many non-Catholic Christians as well, who carry their Rosary beads and recite this traditional prayer. But while many people pray the Rosary, perhaps few are aware of its history, meaning and great value. Consequently, they pray it as a matter of routine and derive less benefit than if they knew more about it. Many are not sure how they are supposed to say it, or what they are to meditate on, or they think that their many distractions make their prayer worthless. The purpose of this little booklet is to shed light on these and other questions in order to facilitate a greater understanding and appreciation of the Rosary and with it, God willing, a greater frequency and fruitfulness in its recitation.

Where did we get the Rosary? The Rosary is one of those devotions that arose out of popular piety over the years. It was not imposed from above by any Pope or Council, and perhaps this obvious action of the Holy Spirit explains in part the Rosary’s perennial popularity. The prehistory of the Rosary can be traced to the custom in the early centuries of reciting many Our Fathers, and counting them in ingenious ways. The hermit Paul of Thebes, for example, who lived in Greece from 234 to 347, is said to have recited 300 Our Fathers each day, counting them by shifting pebbles from one pile to another. In time, in order to pray “without ceasing”, a circular loop of knotted string threaded with beads came to be used to facilitate the counting. The Irish monks used to sing the 150 psalms, dividing them into three groups of 50. By the year 1000AD the people around the monasteries who were unable to read the psalms were instead reciting 150 prayers, usually Our Fathers. The beads used to count the prayers were known as “Pater Noster beads”, and were made by craftsmen who were organised into guilds. Pater Noster Row in London preserves the name of the street in which these guilds were located.

The Marian aspect of this devotion developed in the 11th century with the rise in popularity of the Hail Mary, especially in England. It should be noted that at that time the Hail Mary consisted only of the words of the Archangel and of our Lady’s cousin Elizabeth, recorded in the Gospel of St Luke. The name “Jesus” was added later, and an indulgence for its use was granted by Pope Urban IV (1261-1264). In 12th century Europe a variety of practices developed, with either 50 or 150 Hail Marys being recited, counted on seeds or grains threaded on a string in groups of ten. St Dominic St Dominic in the 13th century did much to propagate the recitation of the 150 Hail Marys, or “Angelic Psalter”, as they were known then, by virtue of the words of the Angel with which the Hail Mary begins and the number 150, which recalls the number of the Psalms. He preached this devotion especially in his fight against the Albigenses, or Cathars, a sect of revolutionaries who became numerous in southern France, Italy and Spain and who repudiated the sacraments, especially marriage, promoted sexual promiscuity and denied the Trinity. Blessed Alan de la Roche, O.P. tells how when St Dominic was discouraged by his lack of success in converting them, Our Lady appeared to him and said: “I want you to know that, in this kind of warfare, the

battering ram has always been the Angelic Psalter which is the foundation stone of the New Testament. Therefore if you want to reach these hardened souls and win them over to God, preach my Psalter.” He began to do so and, needless to say, he was singularly successful. St Dominic encouraged the use of the Rosary all his life, praying it himself daily, especially before preaching. Pope Leo XIII, in his encyclical Supremi apostolatus on 1 September 1883, wrote of St Dominic’s efforts: “Great in the integrity of his doctrine, in the example of his virtue and in his apostolic labours, he dauntlessly declared war on the enemies of the Church, not by force of arms, but through burning faith in the Holy Rosary. He was the first to establish and personally spread this devotion with his sons, to the four corners of the earth.” The name Rosary, it would appear, came to be applied to this devotion from the beginning of the 14th century. The Latin name Rosarium, or “rose garden”, was applied to medieval love lyrics and hence to this love lyric to Mary. By extension the name came to mean a garland, wreath or bouquet of roses presented to Our Lady. At the beginning of the 14th century the 150 Hail Marys were divided into 15 decades of 10, each preceded by an Our Father. It is interesting to note that the statutes of Eton College in 1440 required each student to recite daily the “complete psalter of the Blessed Virgin, consisting of a Creed, 15 Our Fathers and 150 Hail Marys.”

Meditations The meditation on the mysteries of the life of Christ and Mary while saying the Rosary would come later. Around 1400, at the Trier Charterhouse, Adolph of Essen composed a work entitled “The Small Rosary of the Blessed Lady”, in which he suggested that one meditate on the Incarnation of God and life of Jesus while reciting the Hail Marys. Late in the 15th century the Dominican Alan de la Roche, who did much to spread devotion to the Rosary, composed 150 themes for meditation while reciting the 150 Hail Marys. He advised meditating on the Incarnation during the recitation of the first 50 Hail Marys, on the Passion during the second and on the Resurrection, Ascension and Glorification during the third. He preached the Rosary in France and the Low Countries and popularised the Confraternity of the Holy Rosary, a group of faithful dedicated to saying the Rosary. In 1483 a Dominican “Psalter of Our Lady” was published in Germany reducing the themes to the 15 mysteries we know today. The Dominicans followed this arrangement and preached the devotion widely in the 16th century. It was in 1568 that the Dominican Pope St Pius V prescribed the last words of the Hail Mary, beginning with “Holy Mary, Mother of God”, and in 1569 he standardised the Rosary in its present form.

Lepanto Following the Christian victory over the Turks in the decisive naval battle of Lepanto in 1571, a victory attributed to the Rosary, Pope Pius V instituted the Feast of Our Lady of Victories, to be celebrated on October 7 each year. In 1573 his successor, Pope Gregory XIII, changed the name of the feast to Our Lady of the Rosary, and ordered that it be celebrated in all churches with altars dedicated to the Rosary. In 1716, after the victory of Prince Eugene over the Turks at Peterwardein in Hungary, Pope Clement XI ordered the feast to be kept and the Office recited by the universal Church. In 1883, Pope Leo XIII, in his encyclical Supremi Apostolatus, ordered that the month of October be dedicated to the Holy Rosary. Luminous mysteries - John Paul II The most recent development in the history of the Rosary is the addition of five more mysteries, the Mysteries of Light or Luminous Mysteries, by Pope John Paul II. They were added in the Apostolic Letter Rosarium Virginis Mariae dated the 16th October 2002, the day on which the Pope began the 25th year of his pontificate. The new mysteries comprise five significant events of Christâ&amp;#x20AC;&amp;#x2122;s public life and thus they fill in the gap between the Joyful Mysteries of his infancy and the Sorrowful Mysteries of his suffering and death.

As the Pope explained, “It is during the years of his public ministry that the mystery of Christ is most evidently a mystery of light: ‘While I am in the world, I am the light of the world.’” (Jn 9:5; RVM 19) The Luminous Mysteries, all of which relate to the preaching on the Kingdom of God, are Christ’s Baptism in the Jordan, his self-manifestation at the wedding of Cana, his proclamation of the Kingdom of God with his call to conversion, his Transfiguration, and his institution of the Eucharist. The Pope expressed the wish that the addition of the new mysteries would give the Rosary fresh life and enkindle renewed interest in it “as a true doorway to the depths of the Heart of Christ, ocean of joy and of light, of suffering and of glory.” (RVM 19)