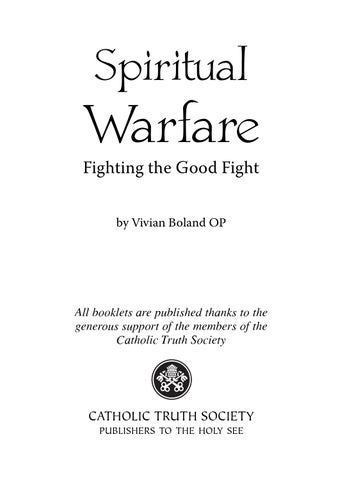 Introduction n 1589 an Italian priest, Lorenzo Scupoli (1530-1610), published a book called Spiritual Combat. In less than twelve months it was being used by St Francis de Sales, then a young student at Padua. Referring to it as his spiritual director, Francis treasured this book all his life, reading a passage every day and the whole book every month. Quickly translated into many languages, it joined Thomas à Kempis’ Imitation of Christ as one of the classic manuals of Catholic spirituality. Its success came from its simplicity, its practical character, and the way in which its teaching rang true, forged as it was in the crucible of Fr Scupoli’s personal suffering. John Henry Newman (1801-1890) used it, especially in the years of his conversion, and it helped form the spiritual life of Blessed John XXIII (1881-1963) when he was a young seminarian at Bergamo. Nicodemos the Hagiorite (1748-1809), one of the editors of the Philokalia, the standard collection of spiritual writings of Eastern Orthodoxy, adapted it for Orthodox Christians. In recent years Scupoli’s work is not so well known, perhaps because the themes of self-denial, self-distrust, and even doing violence to oneself in order to follow

Christ, trouble rather than encourage people. But any serious spiritual teaching involves discipline and the practice of asceticism, a readiness to engage in the struggle with oneself, with the powers of the spiritual world, and with the mystery of how we come to prefer God’s will to our own. In each of the gospels Jesus teaches that those who want to follow him must deny themselves and take up their cross, and that those who lose their life for his sake will find it (Mt 16:24-25; Mk 8:34-35; Lk 9:23-24; Jn 12:25). In 1943 a French Jesuit, Henri de Lubac, wrote an essay called Spiritual Warfare. In this work the future Cardinal identifies the attack on it by the German philosopher Friedrich Nietzsche as the greatest contemporary challenge facing Christianity. For de Lubac this challenge was not just a political and philosophical one although it was that for sure - he writes in a France occupied and partitioned by the Nazis - it is also a spiritual and theological challenge. ‘The Christian who wants to remain faithful’, he writes, ‘can only reject with a categorical No a neopaganism that is constituted against Christ’ (page 500). The warfare in which the Christian must engage is on many levels, then, not just the personal moral and spiritual quest but also the social intellectual and political contest, what has more recently come to be 4

called ‘the culture war’. It is worth noting that when used correctly the Arabic term ‘jihad’ has a similar range of meanings as Christians give to the ‘spiritual warfare’. The so-called ‘Greater Jihad’ refers to the personal spiritual struggle to be ever more faithful to God. The language of combat and warfare is not fashionable in spirituality or theology today. It is clearly open to misunderstanding and abuse. Yet there are many places in the New Testament where the Christian life is presented in just these terms, as warfare (2 Co 10:4), struggle (Ph 1:30; Col 1:29; Heb 10:32; 12:4), a fight (1 Tm 1:18), an athletic contest or agonia (1 Co 9:24), a boxing-match with oneself (1 Co 9:27), a readiness to kill things in ourselves and in our relationships (Rm 8:13), a conflict between good and evil (Jn 5:29; Rm 7:21), light and darkness (Lk 11:34-36; Jn 3:19), truth and falsehood (Jn 8:44), life and death (Rm 6:13,23). In this conflict we are participants and not just spectators, agents but also victims dependent on the power of Christ if we are to survive it. In 1996 John Paul II wrote that spiritual combat is ‘a demanding reality which is not always given due attention today’ (Vita consecrata § 38). At the moment in which a person asks to be admitted to the Church as a catechumen he or she is asked to reject ‘every power which sets itself up in 5

opposition to God and his Christ’ as well as ‘every form of worship which does not offer God true honour’. Soon after this the catechumen receives the exorcisms and is reminded that the spiritual life is a battle between flesh and spirit, that self-denial is needed if we are to gain the blessings of the Kingdom of God, and that God’s help is needed continually. The prayers of exorcism refer to evil spirits, to falsehood and sin, to all forms of immorality, to the tyranny of the enemy, to the spirit of falsehood, greed and wickedness, to the spirit of selfishness and greed, of pleasure and worldly pride. The person is then anointed with the oil of catechumens, an athlete’s oil to strengthen them for the contest. Baptism is the beginning of a struggle, more or less severe according to God’s providence, that ends only at the moment of death. This booklet does not pretend to emulate either Scupoli or de Lubac. All that is attempted is a survey of the theme of spiritual warfare in the Bible. This is done in four parts: the struggle with ourselves, with powers that are ‘not just flesh and blood’, and with God, and a reflection on how these aspects of Christian spiritual warfare are embraced and resolved in the work of Jesus Christ, our leader and victorious champion.