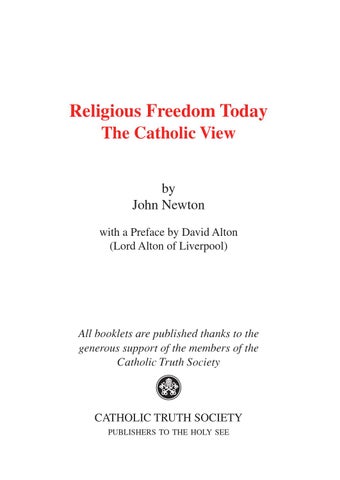 Preface In western democracies the debate about religious freedom revolves around secular and religious values, but for millions of others religious freedom is defined by suppression and persecution. The twentieth century saw more Christian martyrs than the previous nineteen centuries combined. More than half of the worldâ&#x20AC;&#x2122;s six billion inhabitants live in countries where being a Christian could cost you your life. When the Council Fathers met at the Second Vatican Council to address the topic of religious freedom, they did so in the proximity of the tomb of St Peter - who, as well as being the first Pope, gave his life for the Faith. To this day, in our Catholic liturgies we commemorate the sacrifices of the Churchâ&#x20AC;&#x2122;s early martyrs: Peter and Paul, Clement, Cecilia, Felicity, Agatha and the many others. Their refusal to capitulate to the civil authorities in religious matters brought them a martyrâ&#x20AC;&#x2122;s crown. The document the Fathers produced, Dignitatis Humanae, stresses the duty of the believer to search for truth and the simultaneous duty to disavow any form of coercion. It asserts the centrality of the proclamation of human dignity - a dignity which had all too often been violated in the first half of that bloody century. The Council Fathers had learnt a great deal from the experiences of

Nazism and Communism. Emerging from the experiences of a suffering Church, Dignitatis Humanae became the Second Vatican Council’s response to the erupting challenges of the time. Indeed, Dignitatis Humanae speaks forcefully to our own times. It is addressed to the whole world - to believer and non-believer alike. It speaks eloquently to contemporary totalitarian regimes in countries like China and North Korea and to radical Islamist states such as Sudan. It reminds the secularist that God wants no compulsory conversion and governments that they do not have the right to suppress the freedom of religious profession and practice. Yet despite the prophetic message of Dignitatis Humanae, religious liberty is an often neglected part of the Church’s teaching. But it needs to be heard. I am therefore delighted that Dr Newton has produced this summary of Dignitatis Humanae and other Church teaching on the subject. As a key member of Aid to the Church in Need’s Press and Information team, he is keenly aware that every single day Christians, and others, experience harassment and persecution in countries where freedom of religion is not respected - and I am proud to be a trustee of Aid to the Church in Need (UK) and support its vital work helping our suffering brothers and sisters around the world. It is my hope that this booklet will make Catholics and indeed all those of good will - aware of why religious

freedom is of vital importance to todayâ&#x20AC;&#x2122;s world, and will inspire readers to reach out in compassion to those denied this basic human right. David Alton

Introduction1 “In the world today freedom of religion is often talked about rather than put into practice. Indeed, it is forcibly subjected to threats of various kinds and not seldom violated.” Unfortunately, one does not have to look very far to find examples which illustrate these words of Pope Francis. For example, in Pakistan a Christian man, Sawan Masih, was sentenced to death for blasphemy in March 2014. Twelve months previously, 178 homes and two churches were torched when a three-thousand-strong mob attacked a Christian area, called Joseph Colony, following accusations that Mr Masih had uttered blasphemy against the Muslim prophet Muhammed. One Joseph Colony resident said: “We were working [just] like every day, when we started to hear a noise, and suddenly a wall of people fell upon the colony. They threw acid and stoned our houses, then set them on fire. The authorities intervened only when everything was destroyed”.2 Mr Masih maintained his innocence during his year-long trial, claiming that the allegation was prompted by a property dispute.3 Speaking from death row in November 2014, he said: “God knows me, he knows that I am innocent”.4 Nor is this an isolated case. Christians and other religious minorities in the country - including Shi‘a Muslims - have

suffered similar attacks and court sentences over the years following accusations of blasphemy. Nor is religious intolerance restricted to countries like Pakistan. In North Korea there is practically no freedom of belief or practice for any religious group. Officially an atheist state, citizens attempting to worship God can face severe fines and penalties. Even foreign aid workers can run foul of the authorities if they are linked to religious groups: in January 2015, Canadian Presbyterian minister Hyeon Soo Lim, who had been carrying out humanitarian work with orphans and the elderly, was seized by authorities without any reason being given.5 And in numerous cases religious activity has been punished by imprisonment in the countryâ&#x20AC;&#x2122;s internment camps, where prisoners face starvation, forced labour, routine beatings, systematic torture, and arbitrary executions.6 In November 2013, the first large scale executions under new leader Kim Jong-un took place in a number of cities and eighty people were killed, among them Christians who were sentenced to death for possessing Bibles.7 Encroachments on religious freedom can also occur on a much smaller scale. Coptic Orthodox Christian Nadia Eweida was asked by her employer British Airways (BA) to remove the crucifix she wore when working at Heathrow Airport. She refused - since Muslim, Sikh and Buddhist colleagues were permitted to wear religious clothing and symbols - and was put on unpaid leave. Ms Eweida fought

the case all the way to the European Court of Human Rights, which in 2013 finally ruled that BA had not struck a fair balance between Ms Eweida’s religious beliefs and the company’s wish to “project a certain corporate image”.8 It may seem a relatively minor incident, indeed it is trivial compared to those occurring in Pakistan or North Korea, but it illustrates the kinds of issues faced by religious believers in western democracies. Time after time modern societies around the world refuse to let individuals exercise their religious beliefs in a number of different ways. When Pope Francis spoke on the subject he may have had in mind major violations of the kind we find in Pakistan and North Korea. The Holy Father continued: The serious affronts inflicted on this primary right are a source of grave concern and must see the unanimous reaction of the world’s countries in reaffirming the intangible dignity of the human person, against every attack. One and all are duty bound to defend religious freedom and to promote it for everyone. The shared protection of this moral good is also a guarantee of the entire community’s growth and development.9 As we will see the Church teaches that all religious believers, regardless of creed, should be free from state coercion in religious matters, and not be forced to act against their consciences.

Human Dignity The dignity of the human individual is the starting point of Catholic thought on religious freedom. This is reflected in the very title of the Second Vatican Council’s document on the subject Dignitatis Humanae - which translates into English as “human dignity”. The problem of religious communities and individual believers not being allowed to freely practise their faith came to the fore in the twentieth century, and the Church’s Second Vatican Council which met in the 1960s addressed this new situation. The Decree on the Right of the Person and of Communities to Social and Civil Freedom, or Dignitatis Humanae, is the touchstone for all contemporary Catholic thinking on religious freedom in modern societies. So in looking at the Church’s teaching on the issue we will return to this key document time and time again, and much of the material in the following pages will be taken from it, while drawing on a broad range of other material from papal encyclicals and other Church sources. The image of God In the Catholic view, the dignity of the human person comes from us having been created in the image and likeness of God.10 In the book of Genesis the story is told

of how God made humanity and describes how, having made man and woman as the pinnacle of creation, God gifted us and blessed us: Then God said, “Let us make Man in our image, after our likeness; and let them have dominion over the fish of the sea, and over the birds of the air, and over the cattle, and over all the earth, and over every creeping thing that creeps upon the earth.” So God created Man in his own image, in the image of God he created him; male and female he created them.11 Having created Man in his own image and likeness, God endowed him with intelligence and freedom, and made him lord over creation. Pope St John XXIII saw this proclaimed in the Psalms where it says: “Thou hast made him a little less than the angels: thou hast crowned him with glory and honor, and hast set him over the works of thy hands. Thou hast subjected all things under his feet.” 12 We are not mere creatures, rather we have been made to be like God. A spiritual likeness The image of God within humankind is not a physical image, but rather refers to our souls’ ability to reason and choose.13 Of course we have the ability to choose wrongly, as illustrated by the episode later in Genesis where Adam and Eve chose to eat the forbidden fruit, but this does not

change the basic truth that God made us to resemble him. As St Thomas Aquinas wrote, even if you are sin you are still made in the image of God. So the Catechism of the Catholic Church teaches, â&#x20AC;&#x153;Since every person created by God has the basic dignity of being created in the image of God and is sacred, this dignity cannot be lost.â&#x20AC;?14 Through the fall humanity may have lost its supernatural dignity, but not its natural dignity.15 This transcendent dignity is the basis of all rights and responsibilities.16 Thus the ultimate source of human rights is not the fickle will of human beings, nor the state, nor public powers, but God.17 Following from this fundamental dignity of the human individual, there are two basic freedoms which underpin the right to religious liberty within a modern society: freedom from coercion by the state and freedom of conscience.