A Novena to St Columba 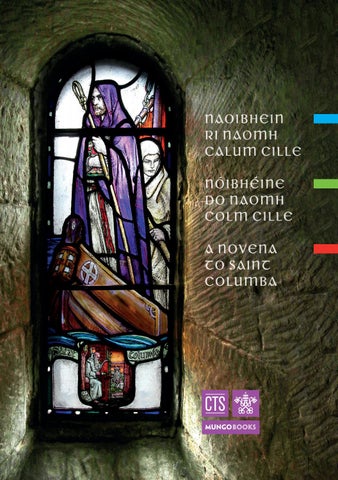 Fifteen hundred years years on, the seeds of faith planted by Saint Columba continue to bear fruit. His spiritual and cultural legacy is maintained by the Celtic peoples of Ireland and Scotland whose Christian Faith finds its most authentic expression in the ancient tongue of the Gael. This Novena and Litany were composed to mark the 1500th anniversary of Saint Columba&#39;s birth and it can be used by the faithful all year round. It puts us in touch again with the roots of our faith, and the trilingual format reconnects the Irish, Scottish and English communities among which Saint Columba and his missionaries lived and worked. As we celebrate this anniversary, we seek the intercession of this holy man of God for the needs of our own times. Fr Ross SJ Crichton is a priest of the Diocese of Argyll &amp; the Isles

to make anything grow in the harsh environment of these beautiful but remote lands, but Saint Columba and his monks were not work-shy when it came to bringing forth a harvest from the land or the spiritual harvest of souls. The mission of Saint Columba bore fruit well beyond the bounds of Celtic Dál Riata as Columban monks criss-crossed the country and brought the Faith to the Picts of northern Scotland and the Angles of north-eastern England. The monks of the ‘Columban family’ were to re-plant the Faith on Continental Europe too after the collapse of the Roman Empire. From Iceland to Italy, the Columban monks have left traces of their presence far from the turquoise waters and white sands of the Hebridean island to which their spiritual roots may be traced. In that remote corner of Celtic Europe, the landscapes which would have been so familiar to Saint Columba would probably still be largely recognisable to him today. More importantly, although diminished by the ravages of time, the Faith he held and the language he spoke still cling tenaciously to their native soil among his own kin. Dál Riata of old has long since vanished and territorial boundaries have been drawn and re-drawn over the centuries. But despite the socio-economic and cultural challenges which they have faced over the centuries, the Faith and language of Saint Columba are with us still – a living heritage. Our Goidelic languages, moulded and shaped under the influence of the Christian Faith, are now as inseparable from the Christian Faith as a body is from its soul. While the

languages provide a rich and expressive vehicle for the Faith to make itself incarnate in our context, so does the Faith animate those languages: from daily greetings which invoke the Saints to the names for the days of the week which evoke the old Christian Fasts. For many people, Irish and Scots Gaelic are still very much the language of their hearts, and if prayer is a raising of the mind and heart to God, it is only natural that we should pray in that language which appeals to the heart; hence, the publication of this Novena and Litany. saint columba Saint Adomnán is our principal source for what we know about Saint Columba’s life and the reader who wishes to learn about the Saint is directed to Saint Adomnán’s Vita Columbae. Writing a century after his predecessor’s death, Saint Adomnán depicts a man whose focus was fixed firmly on God. He was a monk and a missionary, combining life in the Monastery with missions well beyond its bounds. He was a true pastor, working for the spiritual and temporal good of his people, bringing the sinner to repentance and taking care of the bodily needs of those who had fallen on hard times. He was a scholar who studied, copied and illuminated the Sacred Texts and whose appreciation of the natural world led him back to contemplation of the God who created it. He was a mystic as demonstrated by his unerring powers of knowing what was happening at a distance or what was to happen in the future. He was above

all a holy man for whom communing with the angels was as natural as conversation with his brother monks. He predicted his own demise and he passed from this world to the next surrounded by his brethren before the altar in the Church which he had built. His last act was to raise his right hand in a wordless blessing over them. seeking the intercession of the saints Saint Columba’s blessing made his foundations fruitful for many years to come. It is right that in this anniversary year we should seek his blessing anew – and that is the purpose of this Novena and Litany. The Celtic fringe is a beautiful, but harsh, environment. The Machair lands of the west coast are vulnerable and fragile, as are the flowers which bloom upon them every spring. They speak to us of the fragility of our own existence, as recalled in the Psalms, ‘as for man his days are like grass; he flowers like the flower of the field. The wind blows and he is gone and his place never sees him again’ (Ps. 103: 15). Those who live on the Atlantic coast are well aware of the devastation that the wind can cause – it can uproot more than the flowers of the machair. But there is another wind which blows which brings life rather than destruction. As Ezekiel contemplates the valley of dry bones, he would hardly have thought that they could come to life again. But God commands Ezekiel to prophesy to the breath, that coming from the four winds, life may be breathed back into the dead. Similarly, the wind of

Pentecost brought life and vigour to the infant Church, driving her into the streets of Jerusalem and the world beyond. Saint Columba and his monks were well aware of the power of the wind; but they were equally aware of the greater power of God who could calm the seas and direct the wind as He pleased. Many of the stories from Saint Adomnán’s Vita Columbae speak of the Saint interceding for calm seas and a favourable wind. The challenges for the Church in our time are surely no greater than they were in the time of Saint Columba. His life teaches us that when the winds are not favourable, then we have to ask God to intervene to make them favourable. The wind which brings destruction can be turned around to become the wind which brings new life, if God so wills. pilgrimage – a return to our spiritual roots Where we see barriers and obstacles, the eyes of Faith see opportunities. The sea was no barrier for the Celtic monks – they made it their highway. Their boats criss-crossed between Scotland and Ireland reinforcing the religious and linguistic links between the two territories. For centuries, that flow of people back and forth between Scotland and Ireland continued, and it continues still. The religious and linguistic legacy of Saint Columba is still present in these lands, but perhaps not as widely known or appreciated as it should be. This year presents an opportunity for us to rediscover the rich legacy left by Saint Columba and guarded by

PETITION The Life to come

lmighty God, You have established a limit to the life of each one of us, the hour of which is known to You alone. Be with us each day and keep us mindful that the day will come when our eyes will not open to the sunshine of a new day in this life, but in Your mercy, grant that we may see You face to face and enjoy the fellowship of the Saints in Your presence for all eternity. Through Christ our Lord. Amen.

Saint Columba, pray for us!

he Celtic monks sought their ‘Place of Resurrection’ – the place where they would spend their lives and then be buried, awaiting in hope a glorious Resurrection on the Day of Judgement. At the end of his own life, Saint Columba put aside his work and, before dying, he went to the church where he would be in the presence of the Blessed Sacrament of the Altar as he passed from time to eternity.

A Novena to St Columba