Living in the digital age preview 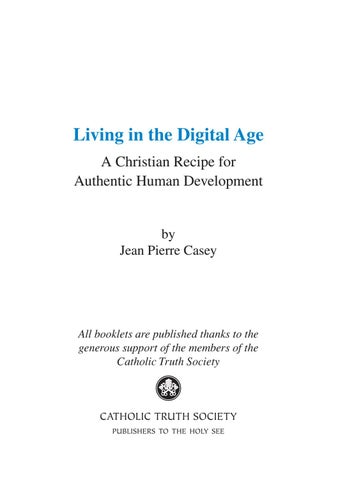 b. Living in the Digital Age.indd 1

This paper was originally prepared at the request of the Foundation Centesimus Annus pro Pontifice. The author presented an abridged version at the 2017 Annual Conference of the Centesimus Annus pro Pontifice Foundation at the Vatican. The paper is circulated under the authorâ&amp;#x20AC;&amp;#x2122;s sole responsibility to elicit comments and to encourage debate; the views therein expressed are solely those of the author and do not necessarily represent the views of the CAPP Foundation or indeed of any institution with which the author may be affiliated. The author gratefully acknowledges comments made by Dr Adrian Pabst on an abridged version of this paper. All rights reserved. First published 2017 by The Incorporated Catholic Truth Society, 40-46 Harleyford Road, London SE11 5AY Tel: 020 7640 0042 Fax: 020 7640 0046. Copyright ÂŠ 2017 The Incorporated Catholic Truth Society. ISBN 978 1 78469 199 8

b. Living in the Digital Age.indd 2

b. Living in the Digital Age.indd 3

b. Living in the Digital Age.indd 4

Introduction In terms of the breadth and depth of its impact, the digital revolution and all that came with it – the facilitation and acceleration of access, broadly writ, through the internet and connected devices; the ability to track and capture records of billions of users’ online activity; the digitalisation and dematerialisation of commerce; the rise of social networking; machine learning and the advent of artificial intelligence – is no doubt one of the most disruptive technological shifts in the history of humankind. Unlike great innovations that propelled humankind to greater heights, whether in the fields of medicine, engineering, agronomy, or physics – the internet, combined with advances in computational powers, has also profoundly affected and indeed altered, human behaviours, particularly in the way we interact. This difference is what makes the disruptive nature of digital technology particularly interesting to study from a Christian lens, as the Social Doctrine of the Church aims to assess the essence of such developments from the holistic perspective of the common good, going right to the core of what it means to be human, and not just uncritically from the unidimensional perspective of ‘progress’.

b. Living in the Digital Age.indd 5

It is precisely because the penetration of digital technology – via connected devices and the ‘internet of things’ – runs so deep into the economy, into our daily lives, and into spheres of social interaction; and because its ability to manipulate, control and distort is so complete, that the digital revolution, also known as the fourth industrial revolution, requires a specifically Christian response. There is a need for urgency, since “humanity today is at a crossroads,” as Pope Benedict XVI puts it, owing to the speed at which these technologies have been introduced and are evolving. In many ways, we have been caught unawares by the wholesale changes wrought by the digital revolution: our economic, political and legal frameworks have not sufficiently evolved to address its undeniably significant cross-cutting impacts. The scale and scope of spiritual and mental ailments associated with high rates of digital penetration also demonstrate that collectively, the People of God have been poorly equipped spiritually and pastorally to deal with these challenges, including being deficient in the collective cultivation of moral fortitude that is requisite in the digital era.

b. Living in the Digital Age.indd 6

This contribution aims to formulate a specifically Christian response to the manifold challenges the digital era presents, by: 1. highlighting the accelerating nature of change the digital revolution has introduced; and analysing the challenges these innovations present from the spiritual, socio-anthropological and economic perspectives; 2. reviewing the principles of the Christian Social Doctrine that can be applied to address specific issues and reminding the readership of the richness and breadth of the Churchâ&amp;#x20AC;&amp;#x2122;s teaching with regard to technological breakthroughs, including digital; 3. offering some suggestions on what constitutes an ordered use of these new digital technologies according to the Christian Social Doctrine and on how the lay Christian community can be informed, engaged, responsible, courageous and holy actors in the digital era.

b. Living in the Digital Age.indd 7

1. Facts: What is happening and what are the consequences? The pervasiveness of the digital revolution is not to be underestimated, hence why the Pontifical Council for Culture has also dubbed it a “cultural revolution”, why Pope Benedict described it as a “period of vast cultural transformation” and why, more recently, Pope Francis has spoken of the “cultural crisis of our time” at the Plenary Assembly of the Pontifical Council for the Laity in 2013, whose theme was “Announcing Christ in the Digital Age”. Major providers of internet or cloud services expect an explosion in connected devices over the next three years. Intel expects some two hundred billion to be in circulation by 2020, an average of more than twenty per person on the planet. In the West, time spent on connected devices is enormous – ten hours average per day for Americans and nearly nine hours per day for Britons, which exceeds the number of hours of sleep for the average person. The average person logs into their iPhones eighty times per day. The ‘internet of things’ has an insatiable appetite to digitise virtually everything. ‘Smart’ devices are being implanted in everything from household appliances to machinery to motor vehicles, and possibly into humans as well, in the

b. Living in the Digital Age.indd 8

near future (live pilot tests are already underway). The rapid progress of artificial intelligence and robotics is fundamentally changing the way we use and interact with previously inanimate objects. These changes have immense consequences for the spiritual life, for family life, for social ties and socioeconomic organisation, not to mention for the â&amp;#x20AC;&amp;#x153;formation of personality and conscience, the interpretation and structuring of affective relationships, the coming together of the educative and formative phases, [and] the elaboration and diffusion of cultural phenomena.â&amp;#x20AC;?1 With such dramatic shifts in lifestyle, in the forms of economic organisation and the ecosystem of social structures, we need to take stock of what have we gained, vs what have we lost, with the advent of the internet. Thus, it is legitimate to ask: what have been the fruits of these new technologies? Have they drawn us closer to God? Have they helped us to better express our solidarity with others? Have they enriched us culturally and spiritually? Have they allowed us to better express our respective vocations and to develop our human potential? Without being overly pessimistic, and whilst acknowledging the many positive characteristics of digital applications, the answer to many of these questions is, unfortunately, no.

b. Living in the Digital Age.indd 9

Despite the great potential of digital applications to be used for good, it is evident, after twenty five or so years, that they have contributed to tremendous fragility in our societies: spiritual and mental fragility, social fragility, economic fragility, and civil liberty fragility, heretofore unquestioned.

b. Living in the Digital Age.indd 10

Living in the digital age preview