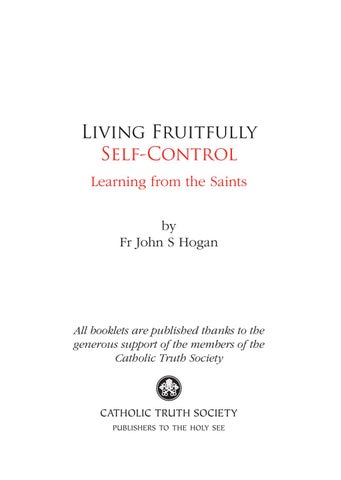 b. Living Fruitfully Self Control.indd 1

“For God did not give us a spirit of timidity but a spirit of power and love and self-control”. (2 Tm 1:7)

b. Living Fruitfully Self Control.indd 2

b. Living Fruitfully Self Control.indd 3

b. Living Fruitfully Self Control.indd 4

lizabeth was furious. She took a deep breath and smiled, but her sister, who knew her well, could see a fire raging in her eyes; anger was blazing in Elizabethâ&amp;#x20AC;&amp;#x2122;s heart. Yet, as was becoming her habit, Elizabeth brought the blaze under control. She spoke sweetly to the offending individual and emerged out of the furnace, much like the three young men, unscathed, with no smell of burning about her. Oblivious, the cause of the rage moved on, as they usually do, and Elizabeth could calm down. Her sister was impressed. St Elizabeth of the Trinity, as this young woman would become, struggled with anger. As a young girl, if offended, she sometimes vented her rage in tantrums or quickly chosen words. Her spirit disturbed, she would regret things said or done â&amp;#x20AC;&amp;#x201C; if she was fortunate; or worse, nurture the hurt and justify the anger and allow pride to dig a hole for her. But Elizabeth wanted to be

b. Living Fruitfully Self Control.indd 5

a saint, she wanted to give her whole life to Christ, to be a daughter of Carmel, and so the reason of virtue advised that she must overcome her faults, learn to control her passions, and that meant confronting her greatest weakness: her anger. Trusting in the grace of God, which can overcome all things, she abandoned herself to the work and influence of the Holy Spirit â&amp;#x20AC;&amp;#x201C; she could not do it herself, she needed his help. As she did so, he planted within her a seed that grew and flowered and bore fruit: the fruit of the Holy Spirit, and its manifestation in self-control. For Elizabeth, this was a precious ointment that eased the fury of wrath and immersed her in a serenity that helped her face the daily challenges of life. Overcoming Weakness We live in a strange age, in Christian terms. It is an age in which the efficacy of grace is, if not denied, then certainly seen to be limited. While the Church has always accepted the reality of human weakness, and factored it into the care of souls in their progress towards holiness, today there seems to be an unspoken surrender to what might be regarded as the impossibility of overcoming certain weaknesses. It seems that even pastoral theology must be rebooted to reconfigure its aims and mission in this regard. In such a climate it is easy to lose sight of the work of the Holy

b. Living Fruitfully Self Control.indd 6

Spirit to transform the human person and generate saints. The saints are men and women of the Spirit: those who have been immersed in grace in the midst of their struggles to overcome their weaknesses, as the great Doctor of grace, St Augustine, teaches us in his life and writings. Instead of suing for peace terms in the battle with their sinfulness, the saints envision an all-out victory and they doggedly prepare for it. As Christians we must understand that the saints are no different from us. There are some of them who, from their earliest years, received extraordinary graces, visions and mystical gifts, but even these were not excluded from the temptations and difficulties of human life â&amp;#x20AC;&amp;#x201C; indeed these challenges were often greater for them. Most of the saints had to inch their way through life, leaning on the gospel and sustained, often in the darkness of faith, by what God in his providence provided. They faced the same joys and sorrows as we do, but they rose to the challenge, drank deeply of the cup of sustenance God offered, and moved forward. Each of them opened their hearts and lives to the Holy Spirit and allowed him give them his gifts and his fruits. The same is to be said for us.

b. Living Fruitfully Self Control.indd 7

Called to Holiness In the Sacrament of Confirmation each one of us experienced a personal Pentecost, when the Holy Spirit descended on us and conferred upon us what the Church calls “the fruits of the Holy Spirit”. These are not just pious-sounding attributes of God, but rather, thanks to the effects of the Sacrament, real graces offered to us to be embraced and used in our daily lives to help us advance in holiness. The Second Vatican Council reminds us that we are all called to holiness; indeed, one of the main themes of that Council is the universal call to holiness – it is one of the aims of the reforms of the Council. Our life here on earth is one in which we are meant to grow in holiness, become saints and offer to the Church and the world an example of faithful Christian living – to be, as St Elizabeth of the Trinity understood, a praise of glory for God. This series of booklets, Living Fruitfully, is concerned with the battle for holiness in contemporary life, exploring the fruits of the Spirit, and drawing modern Christians’ attention to the reality of grace, its powerful work and the fact that Christ’s victory can be proclaimed in the soul even now in our earthly lives. This is the testimony of the saints who, though still struggling and suffering with their weaknesses and

b. Living Fruitfully Self Control.indd 8

sins, lived their lives in Christ’s and were sustained by the fruits of the Spirit in their manner of life, be they popes, bishops, priests, or religious, or laymen and women, married or unmarried. While the gifts of the Spirit are given to individuals and may differ – some are called to be apostles, some to be teachers, for example – the fruits of the Spirit are to be given to all and can be lived by all regardless of their state in life and particular vocation. That includes all of us. It is God’s intention that you and I may act upon what the Spirit seeks to give us, so that we may be sustained and transformed; strong and holy; fit for mission and for the kingdom of heaven.

b. Living Fruitfully Self Control.indd 9