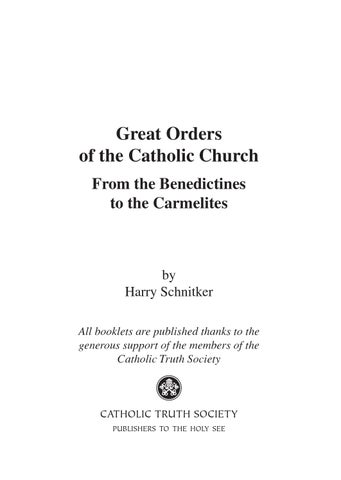 b. Great Orders of the Catholic Church.indd 1

b. Great Orders of the Catholic Church.indd 2

Introduction The religious life (a life vowed exclusively to God) has been a feature of the Church from very early in its history. Since the fourth century, men and women have lived in groups or alone to dedicate themselves to prayer and work. This movement began in Egypt and the Middle East, and from there has expanded across the globe. There are very few places in the world where there are no men or women in Catholic religious orders. From its early roots, the Church has seen an enormous multiplication of orders and movements. Some are very small, no more than a few men or women living together in community in a small house. Others are huge. They have provided the Church with many of her popes and cardinals, bishops, priests, teachers, spiritual guides, hospital staff, scientists and academics. Since 2013, they have once again, for the first time in almost two centuries, provided the Church with its leader: Pope Francis is a member of the Society of Jesus (or â&#x20AC;&#x2DC;Jesuitsâ&#x20AC;&#x2122;). In the pages that follow, some of the largest or most influential of these orders or religious families which have their roots in the period before the Reformation will be introduced. They are presented roughly in chronological

b. Great Orders of the Catholic Church.indd 3

sequence, so as to provide the reader with a sense of the development of the idea of the religious life. This began with a wish to retreat from the world and live in communion, gradually developed rules by which the religious could live, and expanded into organised movements. Later, the idea of mendicant groups, working in the world to meet its needs and challenges, arose. Many medieval religious orders have managed to survive the impact of the Reformation, and the even sterner challenges of the French Revolutionary epoch, radical secularism, Communism and unbridled capitalism. Whenever it seemed that they were doomed to extinction, they began to flourish again, sometimes far from where they were started, at other times experiencing amazing resurrections where they had vanished. Even today, those orders of the Church with their roots in the medieval period contribute significantly to her mission. In the global Church, the number of diocesan priests has been steadily rising over the past few decades. Many of the religious orders, on the other hand, have suffered a decline of varying proportions. The female religious, in particular, have seen vocations decline dramatically in many parts of the globe. It is hoped that this book will help in raising the awareness of what the orders have to offer, so that more people may feel the call to religious life.

b. Great Orders of the Catholic Church.indd 4

The Benedictines Origins The Benedictines are the oldest continuous monastic movement in the Church. When St Benedict first started his monastic life in around AD 500, he met monks already living the solitary life in the mountains in Enfide, some fifty miles east of Rome. These were inspired by the monastic movements in Egypt and the Middle East, and were following a large variety of rules. Some lived the eremitical life (the life of hermits); others were coenobitic, living in community. However, through the Rule he wrote, Benedict placed monasticism on an organised footing. There is much scholarly debate around the source for the life of St Benedict, The Dialogues, Book II. These were long held to have been written by Pope St Gregory the Great. That view has been challenged, but there is little doubt that Benedict was, indeed, an historical figure. Nor does one require the mythical elements of the Dialogues to write a broad outline of the early Benedictine movement. The Benedictines took several centuries to become the dominant monastic movement. Although St Benedict founded several houses near Subiaco, and was Abbot of Monte Cassino when he died around AD 543, his cult was not fully developed until after 670. After that, it would take

b. Great Orders of the Catholic Church.indd 5

another century or so before most European monasteries adopted the Benedictine Rule. This was under the influence of the Emperor, Charlemagne (747-814), who saw the Holy Rule as a unifying element for the monasteries in his almost Europe-wide empire. St Benedictâ&#x20AC;&#x2122;s sister, St Scholastica, also lived the religious life, and from the start there has been a strong female component to the Benedictine movement. Like their male counterparts, the nuns were mainly contemplative. Their lives were a mixture of work to provide food and shelter, hospitality, prayer and lectio divina. Like the monks, the nuns contributed greatly to the life of the Church. The centuries from the ninth to the twelfth are known as the Benedictine centuries. The monasteries became centres of learning and teaching, their libraries receptacles for the culture of Antiquity; they stood at the cradle of the liberal arts and of scientific research. It is no exaggeration to say that the Benedictines were crucial in the shaping of a European civilisation. Benedictine monks were great missionaries, and much credit must go to them for the conversion of Germany east of the Rhine, Scandinavia and Central Europe. All this time, there was no Benedictine order. Instead, each house constituted its own family. Throughout their history, the Benedictines have undertaken numerous reform attempts. The first of the reforms came as the Holy Rule swept all before it in the eighth century. St Benedict of Aniane (c. 745-821) founded

b. Great Orders of the Catholic Church.indd 6

a great house on his ancestral estate in southern France, which became the loadstone for the monastic life in the Carolingian Empire. The first true congregation within the Benedictine movement came into being at Cluny in Burgundy. There, in 910, the Holy Rule was adapted to create a monastic culture centred on an elaborate celebration of the monastic hours and the liturgy. The Abbot of Cluny became the head of an order, which, at its peak, consisted of 310 houses spread across Europe. For two centuries, saintly abbots from Cluny shaped every aspect of religious life, and were instrumental in promoting the rise of Gothic architecture. Cluny was exempt from episcopal control, and exercised profound influence on the Papacy. In the eleventh century, the Benedictines experienced renewed reform vigour. It began in Italy, where St Romuald (c. 951-c. 1027) founded the Camaldolese Hermits. This was an attempt to return to the eremitical ideals of the Egyptian desert. St John Gualbert (c. 985-1073), another Italian, founded Vallumbrosa. Whereas Romuald simply wished to introduce a new form of Benedictine-ism, Gualbertâ&#x20AC;&#x2122;s foundation was a reaction against the corruption and lax morals of contemporary monasticism in Italy. New monastic movements, some based on the Holy Rule, sprang up in this period of great religious revival, but the Benedictine movement continued with some vigour. The next great change took place after the Fourth Lateran Council, which, in 1215, passed legislation

b. Great Orders of the Catholic Church.indd 7

The Augustinians Occasionally, it is still claimed that the Augustinians originated in the fourth century. It is true that St Augustine lived in community after his baptism in AD 385, and that he wrote his letter No. 122 for his monastic sister, which would become the Rule of St Augustine. That Rule, however, was lost and rediscovered only in the late eleventh century. This caused a shock-wave amongst the religious in Europe. The Gregorian reform movement had long claimed that since the apostles lived like monks, all clergy should be like monks. As a result, many clergy had adopted a monastic life without withdrawing from the world. They were known as Canons Regular, but had no common Rule. St Peter Damian (c. 1007-1073) had written instructions for some of these communities, but it was the rediscovery of St Augustineâ&#x20AC;&#x2122;s Rule that would provide them with their foundation stone. It soon came to be the Rule for Canons Regular, for the Order of PrĂŠmontrĂŠ and for the Dominican friars. As C.H. Lawrence observed, it was often difficult to see the difference between Benedictine houses and those of the Canons Regular. Perhaps the main difference lay in the emphasis on study rather than manual work, and in

b. Great Orders of the Catholic Church.indd 13

the more generous dietary allowances given to the canons. Some movements were, however, very severe, such as those of St Victor or Arrousaise. Popes tried to ensure a proper understanding of the distinction between Benedictines and Augustinian canons. Urban II wrote that whereas monks resembled Mary, canons took the role of Martha. This focused minds, and soon the manifold orders of Augustinian Canons Regular were found in many cathedrals, as well as in monastic houses. Over time, they would become more numerous than the Benedictines. Many houses served as hospitals for the sick, the old and for pilgrims. Amongst the most famous of these are the Abbey of St Maurice of Agaune and the Hospice of St Bernard of Mont-Joux, both in Switzerland. Women, too, became canonesses, but their role was mainly contemplative, and they never reached the same prominence as the canons. Some canons went beyond the traditional role. The Order of PrĂŠmontrĂŠ, founded by St Norbert of Xanten (c. 1080-1134), is the most famous example. Its houses were in remote places, and they concerned themselves more with the sanctification of the canons than with any outside commitments. It was not until much later that these canons would take up their active life again. Again, the order has a female branch, which is still mainly contemplative. Over time, the Canons Regular would produce some of the greatest figures of medieval

b. Great Orders of the Catholic Church.indd 14

Christendom. These include several popes, but also the most influential spiritual writer that Catholicism ever produced, Thomas à Kempis, whose Imitation of Christ is outsold only by the Bible. À Kempis belonged to the Devotio Moderna or Windesheimer Congregation. Like the Benedictines, the Canons Regular came to be organised around congregations, many of which did not survive the upheavals of the Reformation or the French Revolutionary period. In some countries, like Austria, they survived in numbers, in others they have been revived on many occasions. They were united in a confederation by Pope St John XXIII in 1959. The Order of Prémontré, also known as Norbertines, as well as the Crosiers, the Lateran Congregation and the Canons of the Immaculate Conception, have all remained outside the confederation. The Augustinian family soon extended beyond the Canons Regular. In the early thirteenth century, several communities of hermits in central Italy united. They sought a common Rule, and in 1231 Pope Gregory IX granted them the Rule of St Augustine. Alexander IV summoned all the various eremitical communities to Rome in 1256, and, in the Magna Unio, enrolled them in a single order, the Hermits of St Augustine, who are friars or mendicants. The many communities of nuns following the Rule at this point were not consolidated into a single order. Many engaged in close association with the hermits from the fifteenth century onwards.

b. Great Orders of the Catholic Church.indd 15

Great Orders of the Catholic Church

Great Orders of the Catholic Church