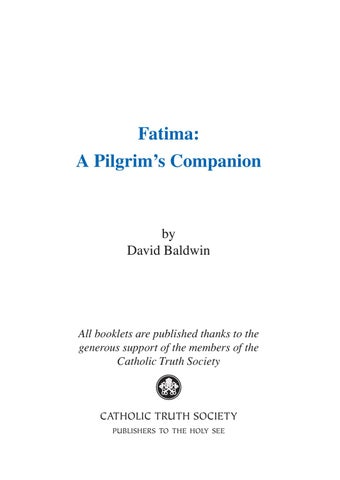 b. Fatima a Pilgrims companion.indd 1

b. Fatima a Pilgrims companion.indd 2

A hundred years ago in 1917, in desolate moorland in the centre of Portugal, Our Lady appeared to three young shepherd children in six apparitions. The messages that she gave them, as Godâ&amp;#x20AC;&amp;#x2122;s unlikely messengers, were of such significance as to shape the future history of Portugal, and inform future Church and world events. But also at an individual level, her guidance is not to be resisted - teaching each one of us the value of prayer and sacrifice, and the way that we as Christian people can contribute to our - and othersâ&amp;#x20AC;&amp;#x2122; - salvation.

b. Fatima a Pilgrims companion.indd 3

I warmly welcome this all-encompassing little book on Fatima. It provides sufficient to whet the potential pilgrim’s appetite, inform the ‘armchair pilgrim’, and provide all that is needed for a pilgrimage to Fatima, with background and practical facts, and relevant prayers and meditations to accompany the journey. The Centenary of 2017 demonstrates most powerfully the relevance of Our Lady of Fatima’s messages. By their very durability these messages will continue to resonate. As succinctly put by Portuguese Cardinal Martins, “It is evident that the prophecy of Fatima is not over, and continues to shape the Church and believers”. I wish every blessing to all pilgrims, as they seek the intercession and inspiration of Our Lady of Fatima.

b. Fatima a Pilgrims companion.indd 4

Fatima - Introduction “The sun’s disc did not remain immobile. This was not the sparkling of a heavenly body, for it spun round on itself in a mad whirl. Then, suddenly, one heard a clamour, a cry of anguish breaking from all the people. The sun, whirling wildly, seemed to loosen itself from the firmament and advance threateningly upon the earth as if to crush us with its huge and fiery weight. The sensation during those moments was terrible. During the solar phenomenon...there were changes of colour in the atmosphere...I saw everything an amethyst colour. Objects around me, the sky and the atmosphere, were of the same colour...I turned away and shut my eyes, keeping my hands before them to intercept the light. With my back still turned, I opened my eyes and saw that the landscape was the same purple colour as before... All the phenomena which I have described were observed by me in a calm and serene state of mind and without any emotional disturbance.” (Eyewitness account of a young lawyer, Dr Jose Almeida Garrett) This powerful, overwhelming and spectacular solar phenomenon was experienced by an estimated seventy thousand people gathered on 13th October 1917 in the

b. Fatima a Pilgrims companion.indd 5

desolate, rural location of Cova da Iria, central Portugal, and attested, as above, by many varied sources. It was the miracle promised by the Virgin Mary to the three young shepherd children to whom she had appeared on five previous occasions that year. It was the miracle that concluded the apparitions of Fatima, the means by which God wished to place his dramatic messages before the people of the world for them to understand and heed, trusting in the simple testimony of three young children - the messengers of God - as so often seen in previous apparition events, such as Lourdes, La Salette and Pontmain. This Book This small book tells this story, describing events and personalities, summarising the messages, and giving a narrative description of the pilgrim experience of the Fatima Sanctuary of today. And in so doing, it seeks to inspire your pilgrimage to Fatima, and whilst there, for you to ponder these happenings at source, assisted by appropriate accompanying prayers and meditations, and for you to return home with your experiences and aspirations, and act on them. It is not a guide book in the conventional sense of giving comprehensive specific details of events, accommodation or travel times - these tend to change and fluctuate over time and season, and this type of information is given in other publications or relevant internet sites. Some major

b. Fatima a Pilgrims companion.indd 6

organisations and contacts regarding Fatima are listed at the back of the book. Fatima Background Looking round Fatima today, whether from within the Sanctuary or in the town, you would be hard pressed to realise that a short hundred years ago there was very little here in terms of human habitation. It was bare, desolate, undulating moorland, providing just enough rough grazing for sheep. It consisted of scrubby vegetation, littered with unforgiving limestone outcrops and rocks, populated by hardy olive trees and the pervasive holm oak. The area where the Sanctuary now sits was known as Cova da Iria (‘valley’, or ‘hollow of peace’). A few small hamlets were scattered widely, one of which was Aljustrel, two kilometres from Cova da Iria, and central to the Fatima story. A kilometre from Aljustrel was the parish church of Fatima serving this scattered community. Fatima is located in the centre of Portugal, some 125 kilometres north of Lisbon. It is a civil parish within the municipality of Ourem, and a church parish within the Diocese of Leiria-Fatima. It has a temperate maritime climate - a mixed bag - affected variously by Atlantic, Continental and Mediterranean influences. It can be chilly and wet during the winter months, becoming drier, sunnier and hot from May onwards, declining again from September.

b. Fatima a Pilgrims companion.indd 7

Legend recalls that the Arabic name, Fatima (that of the prophet Mohammed’s daughter), was that of a Moorish princess kidnapped by a Portuguese knight during the Moor’s occupation of the Iberian Peninsula, and they fell in love and married. She converted to Christianity, taking the name Oureana. A village given as a wedding gift was named after her, which over time was shortened to today’s nearby Ourem. She died young, and was buried in monastic grounds not far from Ourem. A small commemorative chapel was built there - the place being named after her - Fatima. The village of Fatima, with its active parish church, is still very much in evidence, being some two kilometres from the Sanctuary. One can only assume during and immediately after the events of 1917, and the fact they happened in the parish of Fatima, that by default and convenience, the specific area of Cova da Iria became to be referred to as Fatima, which stuck. This strange confluence of a prominent Arabic name with the ‘hollow of peace’ gives rise to hope of the universality and the reach of Our Lady Queen of Peace, with her influence radiating out from here. Fatima Today Today’s modern town has approximately eleven thousand souls, many of whom are preoccupied with hosting the four million or so pilgrims that come here every year. Despite

b. Fatima a Pilgrims companion.indd 8

those many pilgrim visitors, it is a laid-back, relaxed and pleasant place, with a very Mediterranean feel about it, accentuated by the white-walled, red-tiled houses. These pilgrims come to offer their devotions and intercessions to Our Lady of Fatima, some to marvel at the wonders of the supernatural happenings that occurred here in 1917, and many others to ponder the messages imparted by Our Lady to the pastorinhos, the child shepherds. It is one of the best known Catholic pilgrim destinations, and has endured as a beacon of the Church for a century. But for these events, this place would no doubt have remained in total obscurity as history passed it by. Similarly, three young children from Aljustrel - Lucia Santos, Francisco and Jacinta Marto - may have gone on to anonymous adulthood, striving for their ambitions and dreams of work and family, more than likely staying within the confines of their rural community, had they not been graced by God to receive his Mother, the Blessed Virgin Mary, in a series of six apparitions. Their lives, that of the town, indeed of Portugal, were to change dramatically after that six month period between May and October 1917. And beyond that - the apparitions and messages had ramifications that have echoed round Church history and world events, and continue to do so. It is a story of many layers. From the initial telling by simple, uneducated children, striving to articulate, be consistent, and having the courage to stand by the incredible

b. Fatima a Pilgrims companion.indd 9

supernatural happenings that they had witnessed; to the Church’s and the State’s reaction; to the response of the people of Portugal; and, in the longer term, of world history. It is a story still underlain with speculation, enigma - and enduring mystery. Pilgrim Practicalities Portugal has an excellent road and motorway network (toll paying), and Fatima is very accessible from these. The nearest major airport is Lisbon, to which there are many direct flights from international destinations, including the UK, from where budget airlines also operate. If flying to Lisbon, the best option to get to Fatima - unless hiring a car - is to catch a coach from Lisbon main coach station (Sete Rios) to which you can get either by metro, taxi or shuttle bus from the airport. The coach service is comfortable, regular, well priced and efficient. Train is not recommended, as the nearest station to Fatima is some twenty kilometres away, served by an infrequent local bus service, and no guarantee of taxis being on hand. Parking is free and plentiful round the Sanctuary. There is a wide selection of hotels and accommodation to suit every depth of pocket. A search through your favourite internet site will indicate these. There is some pilgrim accommodation provided by the Sanctuary for individuals or groups, of which details can be obtained from the Sanctuary’s official website.

b. Fatima a Pilgrims companion.indd 10

The Sanctuary on a Fatima Feast Day.

It will be very busy indeed during the major Fatima Feast Days - 13th May and 13th October; Fridays, Saturdays and Sundays during the high season can also be busy, and, when there are any specific rallies or large, visiting pilgrimage groups. There is always a balance to be struck between getting that buzz and inspiration from the presence of large devout crowds, and seeking peace, quiet and tranquillity! Toilet facilities are plentiful around the Sanctuary, and it is very wheelchair friendly. There are plenty of daily, scheduled Masses and other devotions in the Basilicas and chapels in the Sanctuary, of which the programme is posted prominently at all entrances, in the hotels, and on their website. The winter programme is less extensive than the summer. There is usually an English Mass in the Apparitions Chapel each afternoon at 15:30. Every night there is a candle-lit Rosary procession

b. Fatima a Pilgrims companion.indd 11

at 21:30. There are also unadvertised private group Masses and other devotions taking place in the Sanctuary. Visiting groups can arrange their Masses and devotions as advised by the Sanctuary through their website. A wheeled mini-train rumbles round the Sanctuary, the town and other sites outside the Sanctuary. It is frequent, and provides a hop-on hop-off service. It is strongly recommended that two days should be an absolute minimum if you want to do full justice to your pilgrimage. There is much to see, take in and contemplate! The Sanctuary website gives details of all aspects. Lastly, with Fatima being the place of Our Lady of the Rosary, we will maintain our focus on the Rosary by suggesting appropriate decades to be prayed at various places, along with the prayers and meditations. These of course are only suggestions, and are in addition to the full Mysteries that you will pray during your pilgrimage. Complementary to this booklet are two Fatima prayer books published by CTS - Fatima: Triumph of the Immaculate Heart of Mary Celebrating the First Five Saturdays and Fatimaâ&amp;#x20AC;&amp;#x2122;s Message and Prayers for Today (see Bibliography). Bom Caminho! Have a very blessed pilgrimage! Blessed those who find their strength in you, Whose hearts are set on pilgrimage. (Ps 84:5)

b. Fatima a Pilgrims companion.indd 12