Elizabeth of the trinity (preview) 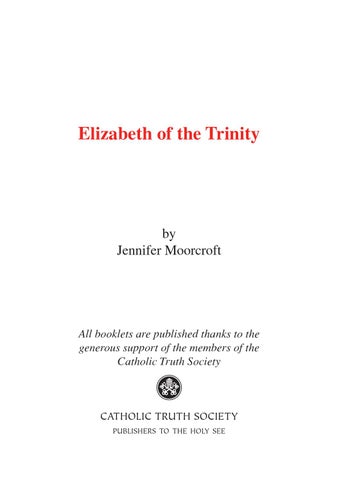 Elizabeth of the Trinity

b. Elizabeth of the Trinity print.indd 1

b. Elizabeth of the Trinity print.indd 2

Introduction With her canonisation on 16th October 2016, Elizabeth of the Trinity became the fourth great Carmelite saint, together with St John of the Cross, St Teresa of Avila and St Thérèse of Lisieux, who are the outstanding teachers of prayer in the Catholic Church . Today, many people are searching for greater depth in their lives and often going to Eastern religions and meditation techniques for inspiration . St Elizabeth of the Trinity reminds us of the immense riches we have in the Catholic faith to guide us in the paths of prayer and union with God . She herself drew above all on the Scriptures, and especially on her “beloved St Paul” for inspiration; so intensively did she live his teachings and those of St John, that they became not simply and inspiration, but the very expression of her own inner life . She lived only five years in Carmel, but twenty-one as a lay person, and had already attained a degree of holiness before entering the cloister . In Carmel she saw no contradiction between what she lived as a religious and what was also possible for a lay person: all are called to holiness and union with God . St Teresa of Avila said we could find God in the midst of pots and pans, and Elizabeth echoed this when she said “we find God at the wash just as at prayer” .

b. Elizabeth of the Trinity print.indd 3

A happy Carmelite Elizabeth’s Prioress, Mother Germaine of Jesus, called her “a happy Carmelite” and this joy permeated her whole life even in the midst of the atrocious sufferings in her final months . Because she lived in love and her horizon was the infinity of God, she had an expansiveness of soul that reminds us that the Christian should be the most joyous of people . St Elizabeth’s reputation as one of the most influential mystics of the twentieth century has been steadily growing since her death in 1906; it is to be hoped that more people will be drawn to her as a sure guide in the way of prayer and the path of holiness, and will be inspired by the beauty of her personality as expressed in her writings and example .

b. Elizabeth of the Trinity print.indd 4

Life in the World On 18th July 1880 Captain Joseph Catez hurried across the French army camp at Avord, near Bourges, to the chaplain’s house . His wife Marie was in labour with their first child and was dangerously ill; both her life and the baby’s life were in danger . There was cause for concern, because Marie and Joseph had married late and had never expected to have children . Joseph was now forty-eight and Marie was thirty-four, so could M . l’Abbé offer Mass for them that all would be well? The chaplain did so, and as he finished Mass Elizabeth Catez came safely into the world . Two years later Elizabeth, nicknamed Sabeth, was joined by a sister, Marguerite, always known as Guite, and the Catez family was complete . In those first years, Captain and Madame Catez had good reason to feel anything but blessed in their elder daughter . Whereas Marguerite had a loving and gentle character, Elizabeth, a real chatterbox, had inherited all the fire and spirit of her parents’ military background . She had a quick temper and a will of iron . The slightest opposition would send her into a tantrum, and all her mother could do was to lock her into a room where she would scream and kick the furniture until she had calmed down . With good reason she was called the little captain . She showed this

b. Elizabeth of the Trinity print.indd 5

imperiousness when her mother took Elizabeth to visit her elderly parents in Saint-Hilaire . A mission was being held there, ending with a special service of blessing for the children . One of the sisters organising it came to ask for the loan of Elizabeth’s favourite doll, Jeanette, to stand in for the baby Jesus . Unfortunately Elizabeth recognised her doll, and to the amusement of the congregation, her eyes blazing, loudly demanded back her doll . Nevertheless, even at an early age, and in that devout household, her parents noted that she had a genuine love for Jesus and was quiet and prayerful when in church . First Confession and First Holy Communion In 1886 Captain Catez retired from the army, having been diagnosed with a heart condition, and the family moved to Dijon; in the following year first Elizabeth’s beloved grandfather died and, later in the year, her father died also . It made a great difference to the family’s circumstances, because Madame Catez now had only a service pension to live on; they rented the upstairs floor of a house owned by a M . Chapuis, just around the corner from the Carmelite monastery . It was a crucial time for Elizabeth; she made her first Confession around Christmas 1887, in preparation for her First Communion in five years’ time . During this period, visiting Canon Angles, a close family friend, Elizabeth climbed on to his lap and whispered, “I am going to be a

b. Elizabeth of the Trinity print.indd 6

nun; I will be a nun!â&amp;#x20AC;? Her mother overheard, and despite having considered a religious vocation herself when she was younger, she was horrified, but hoped that it was just a childish fancy. From the age of seven her mother began to take her regularly to Sunday Mass, and the Eucharist remained at the heart of her spiritual life. Having made her Confession, and realising perhaps the effect her tantrums were having on her beloved mother, Elizabeth began to make heroic efforts to control her temper. Also, Mme Catez had threatened to postpone the date of her First Communion if she didnâ&amp;#x20AC;&amp;#x2122;t improve. She used her iron will against herself, as it were, but she was also motivated by an ever deepening love for Jesus. It was a real battle in the small things of a childâ&amp;#x20AC;&amp;#x2122;s life. One friend remembered seeing tears in her eyes as she gave way in deciding what game they should play. Her parish priest declared that she would become either a saint or a demon and at one point he tried to control her high spirits by making her kneel in the road. Both the girls were highly gifted musically and Mme Catez enrolled them in the Dijon Conservatoire to study piano. It was judged that while Guite had more technical skill, Elizabeth played with more sensitivity and depth. Elizabeth was becoming increasingly calm and gentle and found that in music she could express her love for Jesus beyond words.

b. Elizabeth of the Trinity print.indd 7

Elizabeth made her First Communion on 19th April 1891 at the age of twelve, declaring it to be the most beautiful day of her life . In the afternoon Elizabeth went with her mother to the Carmelite monastery to meet the Prioress, Mother Mary of Jesus, who gave her a small card with a picture and a verse on it, which gave the meaning of her name, Elizabeth: the house of God, the dwelling place of the Trinity .1 She was confirmed on 8th June 1891 . Determination to be a nun As she passed into her teens her mother could not help but realise that her daughter’s determination to be a nun was no passing fancy . She may not have known that Elizabeth had made a private vow of virginity when she was fourteen, but her frequent visits to Carmel forced Mme Catez to realise that her daughter’s thoughts were turning more and more to the cloister . At Mass one day, Elizabeth had heard within herself the call to Carmel, and from her bedroom window she could see the grounds of the Carmel and the nuns there going about their work and prayer . Her mother, on the other hand, was determined that Elizabeth should look elsewhere for her future, perhaps as a music teacher . Elizabeth left the Conservatoire at the age of sixteen . Due to Conservatoire “politics”, she was deprived of the Award for Excellence that should have been hers, but Guite won it two years later . Because their general education was not keeping up with their musical studies, Mme Catez engaged

b. Elizabeth of the Trinity print.indd 8

Elizabeth as a young child playing the piano

b. Elizabeth of the Trinity print.indd 9

a tutor, Mlle Forey. In order to know the girls better, she gave them an essay to write, to describe their physical and moral portrait. Elizabeth was not exactly complimentary about her physical appearance, and for her moral character, without revealing her inner spiritual life, wrote: I would say that I have rather a good character. I am cheerful and, I must confess, somewhat scatter-brained. I have a good heart. I am by nature a coquette; Some say “one should be somewhat”. I am not lazy: I know that “work makes us happy”. Without being a model of patience, I usually know how to control myself. I do not hold grudges. So much for my moral portrait. I have my defects and, alas, few good qualities! I hope to acquire them!2 There was a very deep bond between Mme Catez and her daughters, they dubbed themselves “the three”, and Mme Catez could not bear the thought of Elizabeth shut away from her forever in a convent. Elizabeth was growing into a lovely girl, graceful, simple and elegant, with a charm and vivacity that endeared her to everyone. Her mother wanted her to meet some suitable young army officer, perhaps, for whom she would make an excellent wife, and she felt sure that soon there would be no lack of offers. The idea of her becoming a nun was unthinkable.

b. Elizabeth of the Trinity print.indd 10

Call to Carmel When, at the age of sixteen Elizabeth told her mother of her call to Carmel, to her great distress, her mother refused her permission to visit the Carmel or speak to the nuns . In order to distract Elizabeth, her mother launched her into a round of visits to relatives, parties, country trips, balls and military reviews that formed the principal occupations of young girls of her class at that time . Despite their relative poverty and the loss of status from being a military wife, they had loyal friends who discreetly helped them out financially by inviting them to their houses, especially during the summer months . This was no sacrifice on their part, because the two girls, and their mother made delightful guests . Elizabeth loved the times they stayed with the “Rolland aunts”, her mother’s sisters, at Carlipa, “that little corner of heaven”, a tiny village with a backdrop of the Pyrenees, where she could walk in the tranquillity of the evening . She was equally enthralled by the scenery of Luchon, when they took a landau to the “Gulf of Hell”, high up in the mountains . To the terror of the rest of the party, Elizabeth and her friend Madeleine pranced around the edge of the awesome ravine, completely unaffected by the enormous drop plunging to the waters below . It was at Carlipa that Elizabeth probably began writing her diary . She also began writing poems which helped her put into words her spiritual journey, especially after she entered Carmel .

b. Elizabeth of the Trinity print.indd 11

Elizabeth of the trinity (preview)