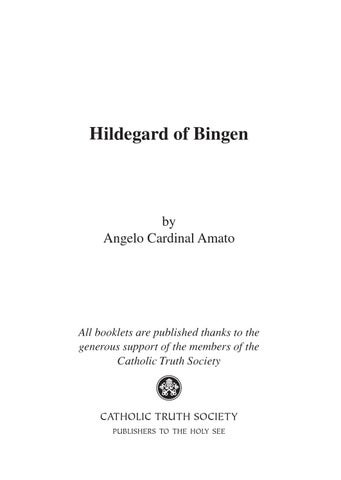 The ‘Canonisation Equivalent’ On 10th May 2012, the Holy Father Benedict XVI “extended to the Universal Church the liturgical devotion in honour of St Hildegard of Bingen, a professed nun of the Order of St Benedict, who was born in Bermersheim (Germany) in 1098 and died in Rupertsberg (Germany) on 17th September 1179, inscribing her in the catalogue of the saints.” This is the brief statement that appeared in L’Osservatore Romano on 11th May 2012. So we ask ourselves: wasn’t Hildegard of Bingen already considered a saint before this? Blessed John Paul II, in 1979, had said of her: “A light of her people and of her time, St Hildegard of Bingen shines more brightly during these days in which we celebrate the eight hundredth anniversary of her departure from this world, the malice and sin of which she kept far away from her, but who, driven by the love of Christ, benefitted by countless gifts to live in eternity with God.”1 And Benedict XVI dedicated two catecheses to her in September 2010, affirming: “Various female figures stand out for the holiness of their lives and the wealth of their teaching even in those centuries of history that we usually call the Middle Ages. Today I would like to begin to present

one of them to you: St Hildegard of Bingen, who lived in Germany in the twelfth century.”2 And so: who was Hildegard of Bingen, and why this delayed official recognition of her sanctity? An unusual case for sainthood Let us say at the beginning that the case of ‘St’ Hildegard of Bingen is very unusual for at least two reasons. The first concerns the particular historical moment (which spans from 1170/71 to 1234), in which there had not yet been a definitive transition from canonisation by the bishop to canonisation by the Pope. As a result, the first steps for canonisation, taken immediately after the death of the Rhenish abbess in 1179, have the feel of a climate of transition, in which the canonical procedures to be followed in this regard were not yet well defined. The second reason is represented by the deeply rooted and widely shared conviction of the holiness of Hildegard of Bingen, which dates back to the period immediately following her death, between the end of the twelfth century and in the first decades of the thirteenth century, a conviction that, in any case, continued practically uninterrupted down to our time and makes reference to a de facto canonisation of the Rhenish mystic, although she had never been proclaimed a saint de iure. The biographical sources, both at the time of her death and later, clearly speak of her as ‘saint’ or ‘blessed.’

The reputation of holiness was further reinforced by the veneration reserved for her tomb and her relics, and also by the liturgical devotion bestowed upon her with the approval of the ecclesiastical authorities, not only in Mainz, but afterward also in Trier, Speyer, Limburg and in the whole Benedictine order. After this, and down to our own time, her name has been found in both the local and the official martyrologies of the Roman Church, always accompanied by the title of ‘Saint.’ Moreover, in addition to the three popes who had the clear intention of proceeding with the canonisation of Hildegard of Bingen - Gregory IX, Innocence IV and John XXII - there have also been supreme pontiffs who have designated her with the title of ‘Saint,’ including Clement XIII, Pius XII and - as we have already seen - John Paul II and Benedict XVI. This common and generalised conviction led to the implicit belief that a specific procedure for Hildegard of Bingen, already seen as canonised, was unnecessary or superfluous. In any case, in order to regularise the situation, Benedict XVI, taking note of the existence since time immemorial of a solid and constant fama sanctitatis et miraculorum, proceeded with the canonisation equivalent according to the legislation of Urban VIII (1623-1644), afterward theorised definitively by Prospero Lambertini, who later became Pope Benedict XIV (1740-1758).3 In the canonisation equivalent:

“the Supreme Pontiff commands that a servant of God - who is found to be in ancient possession of devotion and about whose heroic virtues or martyrdom and miracles there is a constant and common declaration on the part of trustworthy historians, and has uninterrupted fame as a wonderworker - should be honoured in the Universal Church with the recitation of the office and the celebration of the Mass on some particular day, without any definitive formal sentence, without any juridical process whatsoever beforehand, without having carried out the usual ceremonies.”4 The canonisation equivalent of Hildegard of Bingen - nulla accedente formali sententia definitiva, nullis praemissis iudicialibus processibus, nullisque consuetis caeremoniis adhibitis - took place at the decision of Pope Benedict XVI on 10th May 2012. The measure was taken following numerous requests from pastors and faithful who wanted to see the Rhenish abbess officially canonised. This is not a rare case. Examples of ‘canonisation equivalents’ are listed by Prospero Lambertini in chapter XLI of Book I of his magnum opus. He cites the cases of Saints Romuald, Norbert, Bruno, Peter Nolasco, Raymond Nonnatus, Giovanni Maria de Matha, Felix of Valois, Margaret of Scotland, Stephen of Hungary, Wenceslaus of Bohemia, Gregory VII and Gertrude the Great.

Biographical Sketch Hildegard of Bingen was born in 1098 in Bermersheim to a family of rich and noble landowners. At the age of eight she was accepted as an ‘oblate’ in the women’s monastery adjoining the Benedictine abbey of Disibodenberg, where she was educated by Jutta of Sponheim and where she took the veil around 1115, making her religious profession at the hands of Bishop Otto of Bamberg. At the death of Jutta, around the year 1136, the 38-yearold Hildegard was called to succeed her as ‘magistra,’ basing her spirituality on the Benedictine tradition of spiritual balance and ascetic moderation. Around 1140 her mystical experiences and visions intensified, as described and interpreted later with the help of the monk Volmar in Scivias and in some of her other writings. In her initial uncertainty about the origin and value of her experiences and visions she turned in search of advice, around 1156, to Bernard of Clairvaux, from whom she received complete approval. Between November 1147 and February 1148, through Bishop Henry of Mainz and Abbot Kuno of Disibodenberg, Hildegard also consulted Pope Eugene III, who was at Trier at the time, from whom she received what amounted to papal confirmation of her visions and writings.

Following an increase in the number of nuns, due above all to the great esteem in which she was held, and with the emergence of conflict with the neighbouring Benedictine monks of Disibodenberg, around the year 1150 she was able to found, using her familyâ&amp;#x20AC;&amp;#x2122;s assets and financial support from the wealthy von Stade family, a monastery of her own on the Rupertsberg, at the confluence of the Nahe and the Rhine, in the environs of Bingen, where she moved together with twenty nuns, all of noble birth. In 1165, both because of the great number of requests for admission and above all in order to permit non-noble candidates to enter the Benedictine monastic life, Hildegard founded a new monastery in Eibingen, on the opposite bank of the Rhine, renovating an old building belonging to the Augustinians and appointing a prioress for day-today administration. She remained the sole abbess of both monasteries, Rupertsburg and Eibingen: although she normally resided at Rupertsberg, she went twice weekly by boat to the monastery of Eibingen to guarantee the two foundations a unity of spiritual orientation, administrative direction and governance. Within the cloister walls she took great care of the spiritual and material life of the community, with special emphasis on the fraternal spirit, cultural education and the liturgy, often enlivened by songs of her own composition, and treating the illnesses of her fellow sisters with herbs that she herself cultivated and prepared. She gave the community a very

balanced spiritual life, avoiding extremes of asceticism that were not rare at the time and distributing with moderation the times of fasting, silence and prayer, which she balanced with times of work, rest and wholesome recreation. In the outside world she made active efforts to reinvigorate the Christian spirit and to strengthen religious practice, seeking also to combat the heretical tendencies of the Cathars and to promote the reform of the Church, and above all to improve the discipline and way of life of the clergy. At the invitation first of Adrian IV (1154-1159) and then of Alexander III (1159-1181), the abbess of Rupertsberg and Eibingen exercised a fruitful apostolate - unusual for a woman at the time, and even more so for a nun officially kept in cloister - making from 1159 to perhaps 1171 three or probably four great apostolic voyages, and preaching even in the public squares and in various cathedral churches, including in Cologne, Trier, LiĂ¨ge, Mainz, Metz, Werden, Bamberg and WĂźrzburg. With regard to reform in particular, she was not afraid to urge eminent members of the ecclesiastical hierarchy and numerous representatives of the clergy to more consistent Christian conduct. She also addressed very harsh words to Emperor Frederick I (1122-1190), to whom she was bound by sentiments of friendship, but who had dared to appoint and oppose to Alexander III (1159-1181), the legitimate pope, the three antipopes Victor IV (1159-1164), Paschal III (1164-1168) and Callistus III (1179-1180).

A gifted expert in many areas In her numerous and well-known works, Hildegard of Bingen not only describes her visions and mystical experiences, but also demonstrates her knowledge as a musician, cosmologist, artist, dramaturge, naturalist, healer, philosopher and composer. Among her most famous works, apart from her voluminous correspondence, mention must be made of Scivias sive Visionum ac Revelationum Libri Tres, perhaps her best-known composition, containing the contents of twenty-six visions; the Liber Divinorum Operum; the Liber Vitae Meritorum, and other lesser writings of various genres and lengths. She was often written to or visited at the Benedictine monastery on the Rupertsberg by eminent figures or ordinary people who turned to the Rhenish abbess with trust and in search of exhortation, advice or even healing, since both her reputation for holiness and miracles, and her knowledge in the areas of the natural and medical sciences, were by then widely known. One episode serves to demonstrate the boldness of this saint. The year of 1178, two years before her death, was characterised by a dispute with the prelates of Mainz. The archbishop, Christian, had been called temporarily to Rome. The abbess had permitted a formerly excommunicated nobleman, who had been fully reconciled with the Church and received the last sacraments, to be buried in the

territory of Rupertsberg. The prelates of Mainz had asked that he be buried elsewhere. When Hildegard refused, the whole monastery was put under ecclesiastical interdict. The celebration of Mass in the monastery chapel was prohibited, the nuns were allowed to receive the Eucharist only once a month, and they had to recite the office quietly and behind closed doors. Hildegard was forced to send a letter of appeal to Archbishop Christian, who, after pondering all of the facets of the difficult question, agreed with the abbess and freed the monastery from the interdict that had disturbed the lives of the nuns for several months. At the age of eighty-two, Hildegard became ill in the summer of 1179 and passed away, surrounded by her fellow sisters and with the reputation of holiness, at the monastery of Rupertsberg near Bingen on 17th September 1179. According to the Vita Sanctae Hildegardis, she had foreseen the day and time of her death long beforehand.