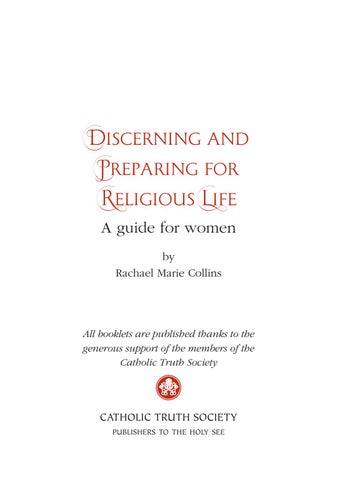 b. Discerning and Preparing for Religious Life.indd 1

b. Discerning and Preparing for Religious Life.indd 2

b. Discerning and Preparing for Religious Life.indd 3

And just so, he has called women in all times to the most intimate union with him: they are to be emissaries of his love, proclaimers of his will to kings and popes, and forerunners of his Kingdom in the hearts of men. To be the Spouse of Christ is the most sublime vocation which has been given, and whosoever sees this way open before her will yearn for no other way. St Edith Stein

b. Discerning and Preparing for Religious Life.indd 4

There is a dearth of materials for those discerning or preparing for entry into religious life. Much is available to assist couples preparing for marriage, but very little specifically tailored for those called to religious life. It must seem presumptuous for me as a married woman to write about discernment and preparation for religious life. I do not know religious life but I do know what it is to discern (having done so at your age) and I do know what it is to be (and remain!) a beginner in the spiritual life. This book is for young women like you, who are just starting the discernment process. It is based on my own discernment, which started at fourteen and continued, on and off, until I was twenty-three. More importantly, it draws on the wisdom of our saintly sisters in Christ - women who understood and embodied what St John Paul II called our “feminine genius” (Mulieris Dignitatem) - St Teresa of Avila, St Thérèse of Lisieux, St Zélie Martin, St Faustina, St Teresa of the Andes, and Blessed Elizabeth of the Trinity, to name but a few.

b. Discerning and Preparing for Religious Life.indd 5

6 My aim is to provide you with an overview of the spiritual life and discernment process, and to guide you to richer, more formidable authors and resources that you can delve into as needed. Some of these authors are modern; many are from our past. All contribute to the rich spiritual tradition of the Church. You might find some of these things difficult and challenging. Christ does challenge us, yes. But he also invites us - in whatever state of life he intends for us - to joyful union with him; he makes possible a life richer and more fulfilling than any we can imagine for ourselves. Older religious might be reminded of their own formation. Why, they might ask, would these younger generations embrace a spirituality that is so exacting? Because nothing less than a full gift of self - whether that be in marriage or religious life - will satisfy! Nothing less than an offering of our all - even though we know that in trying for the ideal of Christ, we will inevitably fail - will quench the desires of our heart (Ps 37:3-7). Fortunately, Christ meets us in our failures and it is only when we offer all of ourselves to him - the broken bits as well as the whole bits - the failures as well as our successes - that he can transform us into our true selves: radiant daughters of God. It is a rigorous way of life but with humility, perseverance and grace, you will find it joyful and beautiful.

b. Discerning and Preparing for Religious Life.indd 6

7 I hope this book is helpful to you. I also hope it will assist fathers, mothers, siblings and priests in supporting their daughters, sisters and parishioners as they progress towards union with Christ. Love, Rachael Marie

b. Discerning and Preparing for Religious Life.indd 7

It can take a long time to discern a call to religious life. Don’t be disheartened that you still aren’t sure what God is asking of you. Part of the problem is that you haven’t been told how to discern. It is difficult to accomplish something when you don’t know where to start or how to proceed. Some souls know from a very early age that they are called to belong to him and to him alone.1 St Faustina knew at age seven and first sought entry into the religious life at eighteen. St Thérèse of Lisieux, your namesake, also knew from an early age and first tried to enter Carmel at age fourteen. It is more common to spend many years in discernment.2 It took St Thérèse’s parents many years to discern that they were not called to religious life. Saints Zélie and Louis Martin were told at ages twenty and twenty-two respectively that they did not have a vocation to religious life, despite

b. Discerning and Preparing for Religious Life.indd 8

9 yearning for such a life for many years. Louis remained single for nearly fifteen years before marrying Zélie in 1858 aged thirty-five. Zélie was twenty-nine. It is frustrating that you cannot clearly see what path you are called to take. This can lead to impatience or a sense of having been abandoned. This cross of unknowing, however, can be a great gift. This time of discernment is really a period of preparation and training - preparation for and training in the religious life. For this is how one discerns. It is also a period of courtship. Throughout this stage of discernment, Jesus desires you for himself and wants you to learn how to love him more perfectly. During a Christian courtship, people discern whether they should marry. They learn about one another. They develop ways and patterns of speaking with and relating to one another. They also help one another with acts of love and service. As they discern together, they slowly and prudently start to lay a foundation for marriage. Your courtship with Christ is no different. Get to know him. Spend regular time with him in prayer. Develop a way of relating to him and being preesnt to him. Allow him into your heart. Allow him to court you and love you. In the same way that a woman will allow her fiancé to lift something heavy for her or perhaps help her father

b. Discerning and Preparing for Religious Life.indd 9

10 with a repair around the house or some other manly work, allow Jesus as your betrothed or possible future spouse to do much for you. You do not have to do the heavy lifting by yourself anymore. He is waiting for your permission to help you. Jesus will shower your soul with many graces during this period of discernment, if you are willing to receive them. Your discernment period is a time to draw closer to God. It is a time to develop a rich interior life so that you: (a) are ready to enter religious life if called; or (b) can continue with life in the world in a solid and holy way should it be Godâ&amp;#x20AC;&amp;#x2122;s will that you serve him as a lay person. The desire to give oneself entirely to Christ is a grace from Jesus. Even if you are not called to religious life, it pleases him that you are sincere in seeking out his will for you and trying to conform to it. Ask Jesus to give you the grace to endure this wait patiently. In moments of difficulty or impatience, meditate on Christâ&amp;#x20AC;&amp;#x2122;s hidden life - the life he led from birth to age thirty.3 For thirty years he knew who he was and what he was to do for us, and yet he waited all that time. He spent this time honouring, loving and assisting his mother, Mary, and his adoptive father St Joseph, praying, practising his carpentry trade and diligently fulfilling all his duties of state.4

b. Discerning and Preparing for Religious Life.indd 10

11 Here you have the perfect model to follow. Ask Jesus of the Hidden Life to help you use this time of discernment and preparation well. Try to be productive and intentional in how you live during this wait. It is given to you to prepare: pray, read and study, attend Holy Mass, work and grow in a life of regular prayer and the sacraments. Like Christ, live frugally. Like Christ, behave, dress and speak modestly. Like Christ, support your family. Like Christ, fulfil all your duties of state. Like Christ, devote yourself to prayer and the diligent study of Sacred Scripture and the Catholic faith. Like Christ, engage in disciplined work. The discernment period will also be used by Our Lord to reveal areas in which you need to grow. Some souls might need to overcome the faults of impatience and selfabsorption. Others might need to grow in forbearance, fidelity or courage. St Faustina allowed her parents’ opposition to deter her from entering the convent. “Interiorly”, she “shunned God” and “tried…to stifle it [the incessant call of grace] with amusements”. Jesus rebuked her in a vision. He said to her, “How long shall I put up with you and how long will you keep putting me off?”5

b. Discerning and Preparing for Religious Life.indd 11

12 Faustina begged Jesus for the grace to know what to do. When he revealed what this was, she took decisive and immediate action. She left home, and travelled immediately to Warsaw as instructed by Our Lord. Jesus gave her the grace to overcome her timidity. St Faustinaâ&amp;#x20AC;&amp;#x2122;s response illustrates how we should approach obstacles, trials or weaknesses uncovered during the discernment period. Take the matter to Jesus and Mary, and ask for their assistance. Beg God for the graces you need to overcome any faults he reveals to you during this period of courtship. Specifically request the graces of perseverance, patience, purity, humility, courage, fidelity and wisdom. Ask Our Lady to intercede on your behalf. Visit him often in the Blessed Sacrament and ask him for the assistance you need.

b. Discerning and Preparing for Religious Life.indd 12

When St Thomas More discerned whether he should become a priest, he did so by engaging in â&amp;#x20AC;&amp;#x153;exercises of piety, looking to and pondering on the priesthood in vigils, fasts and prayers and similar austerities.â&amp;#x20AC;?6 In other words, his discernment was a form of preparation - he entered deeply into the spiritual life and, in doing so, obtained an answer as to his vocation. His biographer notes that the saint was more thoroughly prepared for the priesthood than most candidates who do enter. Follow the example of St Thomas More. If you feel an attraction for the religious life or wonder whether it might be for you, then prepare for it. Act as if you are called. Say a prayer of obstruction7 and take all the necessary steps to enter. This is how you discern.8

b. Discerning and Preparing for Religious Life.indd 13

14 Approaching discernment in this way will help you remain peaceful and detached. Discernment is aptly described as an agony and it is easy to become angst-ridden.9 Try to be detached about your need for certainty. When you ask God for light regarding your vocation, he hears you and he will respond. Perhaps not when you want him to respond, but he will do so in his time. He will guide you in this. Pray to God for the strength, wisdom and generosity to get on with the task of preparing for and entering religious life. And then start. There is nothing more important than this.

b. Discerning and Preparing for Religious Life.indd 14