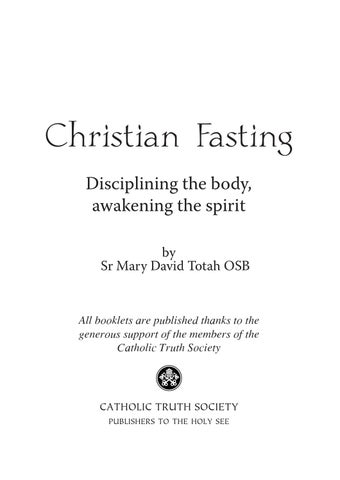 The nature of fasting od has given us the goods of the earth, not only that we may enjoy them, but also that we may have the means of ... showing him our love by the voluntary renunciation of his gifts, and by the oblation of them to his glory. To abandon, for Godâ&amp;#x20AC;&amp;#x2122;s sake, all worldly enjoyments, has always been the practice of holy souls. (Saint Alphonsus de Liguori)

A neglected spiritual practice Fasting, in our days, has become one of the most neglected spiritual practices. Because of misunderstandings regarding the nature of fasting, Christians tend to fast very little, or disregard fasting altogether. Yet fasting was practised by Christ himself. After prayer and fasting for forty days in the wilderness, he victoriously faced the temptations of the devil (Mt 4:1-11). The Lord asked his disciples to use fasting as an important spiritual weapon to achieve spiritual victories (Mt 17:21; Mk 9:29; Lk 2:37). The example of the Lord was followed by his disciples (Ac 14:23; 27:9; 1 Co 7:5; 2 3

Co 11:27, etc.), and St Paul expressly speaks of fasting as a means by which Christians are to commend themselves as servants of God (2 Co 6:5). Physical and spiritual aspects In the Churchâ&amp;#x20AC;&amp;#x2122;s tradition, fasting is much more than a penance. Fasting for the Christian has two aspects: physical and spiritual, outward and inward. On the outward level, fasting involves physical abstinence from food and drink; yet rules about eating and drinking must never be treated as an end in themselves, for fasting has always an inward, spiritual purpose. Man is a unity of body and soul, and our fasting is a practice that involves both. So fasting will also include abstinence from evil thoughts, desires, and deeds. Fasting to acquire purity of heart Fasting is part of the struggle against weaknesses and defects to acquire purity of heart. It fosters prayer. It is a way of preparing the body for the resurrection, opening it to grace, and making it more receptive to Godâ&amp;#x20AC;&amp;#x2122;s word. Renouncing taste for earthly nourishment develops the taste for God. It is to liberate oneself from dependence on the things of this world in order to concentrate on the things of the Kingdom of God. According to St Seraphim, fasting is an â&amp;#x20AC;&amp;#x153;indispensable 4

means” of gaining the fruit of the Holy Spirit in one’s life, and Jesus himself taught that some forms of evil cannot be conquered without it. When the Apostles failed to heal a sick and suffering child, Christ explained that, “This kind (meaning the devil) can come out only by prayer and fasting” (Mt 17:21, Mk 9:29).1 As St John Chrysostom comments: “These are like two wings that carry a person to the heights of God.” Fasting as a sign of expectation But there is more. Fasting reminds us that Christians belong to a religious tradition which begins with a fall, connected with breaking a fast in Paradise, when Adam ate the forbidden fruit, and ends with the hope of a never-ending banquet. In between there is our Lord and his forty days of fasting, and the gift of his body and blood, in the form of the bread and wine from which we receive our daily nourishment. In such a framework eating and fasting are by no means negligible values. We fast in order to acknowledge the Lord as the true giver of good gifts; as the true Gift, the true Bread of Life, and as the One calling us to the banquet of his Kingdom. Fasting is ultimately for the sake of feasting. Abstaining through the forty days of Lent only makes sense if we are preparing to “be alleluia” throughout the fifty days of Easter. Fasting from the food and drink of 5

this present world is for Christians a sign of expectation: we expect to feast on the food and drink of everlasting life in the new world, the world of the resurrection. So our fasting orients us towards Christâ&amp;#x20AC;&amp;#x2122;s second coming, just as the Eucharistic fast orients us towards receiving him at Mass. We fast to purify eating and drinking We do not fast because there is anything in itself unclean about the act of eating and drinking. Food and drink are, on the contrary, Godâ&amp;#x20AC;&amp;#x2122;s gift. Christians fast, not because they despise the divine gift, but to make themselves aware that it is indeed a gift. We fast to purify our eating and drinking, and to make them no longer a concession to greed but as sacrament, a means of communion with the Giver. So there is no question here of saying that fasting is a good thing because food and drink are bad things. That would be a kind of Gnosticism, a disparaging of Godâ&amp;#x20AC;&amp;#x2122;s creation. Food is not bad in itself; it is neither pure nor impure. As our Lord says, only what comes from the heart of man deserves such designations. St Thomas Aquinas says that if we have that negative attitude to food, our fasting is without Christian value. For him, fasting is part of the virtue of temperance, or self-control, which deals with acting rightly in areas of food, drink, and sexuality. 6

Temperance restrains the passions, ordering us towards our true good in this life and the next. And in all this he stresses that the worst vice is to lack proper esteem for the goodness of the world God has made, to fail take delight in the world God has made for our good. Fasting is part of the natural law It is said that St Gertrude rejoiced when better food appeared on the table on feast days, as children are happy when their parents have a party for them. Once when she was given a bunch of grapes, she heartily enjoyed the gift God had sent her, and that night Christ appeared to her with grapes in his hand to show his approval. So fasting out of disdain for food is not a good work. On the contrary, it is heresy. Nevertheless, for St Thomas, fasting is part of the natural law; it is found in all religious traditions. In fact if we do not fast we fail in our common humanity. This booklet is intended to explain the apparent paradox.

Fasting in other traditions What the eyes are for the outer world, fasts are for the inner. (Gandhi) asting or abstinence from food is not an exclusively Christian practice. It existed and still exists in other religious traditions, and even outside them, for example in some therapies or medical treatments. Fasts vary in their duration, motives, and modalities. There are occasional fasts, or regular fasts inscribed in a sacred calendar; the fast may be religious or simply natural, ascetic, medicinal, or political. In primitive religions, fasting was often practised before the hunt, or harvest, or before initiation ceremonies or other rituals, or to approach a deity or receive visions, as among certain American Indian tribes or among the Tugues of Siberia. Priestly groups among the Pueblo Indians fast during retreats before major ceremonies connected with changes in the seasons. Such forms of asceticism were believed to aid the faithful in their struggle against evil.

Sacred times Fasting for special purposes or before or during sacred times is also characteristic of the major religions of the world. Buddhists fast on certain lunar days. In China, before the sacrifice during the night of the winter solstice when the heavenly Yang principle was believed to begin its new cycle, a fixed period of fasting and abstinence was observed. In India, Hindu sadhus or holy men are admired for their frequent personal fasts. Muslims fast for the thirty days of Ramadan, when they eat and drink nothing before sunset. Social and political purposes Fasting has also served certain social and political purposes. Mahatma Gandhi in the early part of the twentieth century used fasting as an effective strategy for his Satyagraha or Protest for the Truth campaign in India. He often called for collective fasts of twenty-four hours, on a national or local scale, for the sake of purification or penance. He conducted a fast in prison to atone for the excesses of his followers who would not practise his teaching of non-violence against British rule. He initiated a fast to death in 1934 in protest against untouchability and again in 1947 to stop bloodshed between Hindus and Muslims in Bengal and Delhi. But fasting for Gandhi always retained its 9

religious, penitential significance: “A complete fast”, he wrote, “is a complete and literal denial of self. It is the truest prayer.” Following Gandhi, fasting has frequently been practised to protest against war and social evils and injustices, as in the case of the black former comedian Dick Gregory in the US, who from the 1960s fasted on only water and fruit juice in protest against the violation of civil rights of American Indians and against US military activity in Southeast Asia. Similarly, the hunger prevailing in a great part of the globe has drawn many Christians to deprive themselves of one meal a week, the cost of which is given to charity. In this case, fasting is not only a form of public protest but also an awakening of consciousness and a form of solidarity. Promoting the struggle for purity Whether undertaken for religious, political, or ethical reasons, fasting and abstinence has been seen, even in non-Christian contexts, to promote a higher good and to sustain the struggle for purity. For both the religious person and the non-violent protester, fasting witnesses to the intensity of the desire, the seriousness of the concern, and the determination of the will to overcome evil.