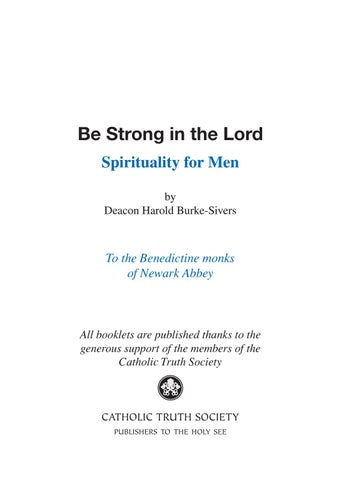 To the Benedictine monks of Newark Abbey

b. Be Strong in the Lord.indd 1

b. Be Strong in the Lord.indd 2

Introduction The Catholic man is an endangered species. Unlike other such species who can trace their path toward extinction back to an extrinsic cause, Catholic men are destroying themselves by their own freely willed choice. We choose pornography and masturbation over the one-flesh union of the conjugal act in marriage or the intimacy of celibate life. We choose abortion and contraception over serving, protecting and defending a woman’s dignity and building a culture of life. We choose spiritual sloth and laziness over witnessing to the truth of our faith with passion and conviction. We’ve become timid. We’ve stopped leading. We no longer desire holiness. We’ve compromised our values and abdicated our responsibility. Catholic men were created for greatness but instead choose to be purveyors of immorality and mediocrity. How did we get here? In a nutshell, by abdicating our responsibility to live as godly men we have turned our backs on the authentic moral teachings of the Church, especially in the area of human sexuality. The entertainment industry inundates society with prosaic images, half-truths and transient moral values that often depict male characters as laughable buffoons,

b. Be Strong in the Lord.indd 3

sex-starved womanisers and money-loving boors. These portrayals are symptoms of a much larger disease: the influence of secularisation, radical individualism and moral relativism that slowly erode the hearts, souls and spiritual lives of Catholic men. The implications for the Church and family life are serious. Catholic clinical counsellor, Dave McClow, notes that: The Church is losing men! The typical Sunday Mass has about 60% women and 40% men. Many men see going to church as women’s work. There are 76% of baptised Catholics who don’t attend Mass regularly. But if fathers thought that going to church was important and went, their children and wives would follow. Fathers have a profound effect on the next generation according to a census study from Switzerland. If mum and dad attend regularly, 34% of their kids will attend regularly. If mum goes regularly and dad goes irregularly or not at all, that drops to 2% or 3% of their kids who will attend regularly. (“Toward a Theology of Authentic Masculinity”, Patheos blog, 4th December 2013) The Lie of the Culture Our culture has turned men into caricatures, extolling the vice of egocentrism and portraying men as individuals that should not be taken seriously. Society says to men, “as long

b. Be Strong in the Lord.indd 4

as you are a ‘good person’, you don’t need anyone to tell you what to do or how to live.” It perceives Catholicism as an external imposition of intrinsically hostile, archaic rules and regulations upon society’s enlightened view of freedom. As a result, many men come to believe, “I am truly free and authentically a man when I accumulate as much money, power and sex necessary to make me happy and fulfilled.” In short, men have bought into the lie of the culture. The results within the family and society are devastating. The divorce rate among Catholics is almost equal to the divorce rate of secular society. A culture rooted in subjective truth says that love does not mean commitment, self-gift and sacrifice. Instead, love means whatever you decide it to mean. Nowhere is this more evident than in the classic cultural affirmation “If it feels good, do it.” Marching to the anthem of relativism, men “play the field”, resulting in the birth of children that, for the most part, they have no interest in raising or financially supporting. An entire generation of fathers has physically, emotionally or spiritually abandoned their wives and children. Women have compensated either by assuming masculine roles within the family or by constructing innovative support networks for themselves and their children. This changing dynamic has brought us to a critical juncture as men: if we continue to live as men of the culture, fathers in the family may be considered optional and, in many cases, unnecessary.

b. Be Strong in the Lord.indd 5

Furthermore, relationships abound in which immediate self-gratification takes precedence over chastity, where the inherent dignity of the woman is all but eliminated, and what self-respect remains is exploited for the superficial pleasure of men. Prostitution and pornography are multibillion pound industries. Domestic abuse and other forms of violence against women have reached epidemic proportions. A spirituality that truly embraces what it means to be a man of God is the weapon of choice against the ever-encroaching culture of death. How can men attain this spirituality? What is Catholic Male Spirituality? The Catholic contribution to male spirituality was relatively sparse until the 1990s, when, largely sparked by the success of the Protestant Promise Keepers movement, interest began to rise. Much Catholic literature has focused on fatherhood, but recent works have embraced a more holistic approach (see the Further Reading section for some examples). The Churchâ&#x20AC;&#x2122;s Magisterium has not produced a developed theology of male spirituality, although a few documents speak directly to a Catholic manâ&#x20AC;&#x2122;s spiritual life (see, for instance, Pope Leo XIIIâ&#x20AC;&#x2122;s encyclical on St Joseph Quamquam Pluries; the Vatican II documents Gaudium et Spes and Apostolicam Actuositatem; and Pope St John

b. Be Strong in the Lord.indd 6

Paul II’s apostolic exhortations: Familiaris Consortio; Christifideles Laici; Mulieris Dignitatem; Redemptoris Custos; and his 1994 Letter to Families. See also the United States Conference of Catholic Bishops’ 2002 document Hearing Christ’s Call: A Resource for the Formation and Spirituality of Catholic Men). What, then, is Catholic male spirituality? It is first and foremost an encounter with the living God in the person of Jesus Christ, who is the quintessential example of what it means to be a man. Since it is only through Christ that we can receive salvation, a truly genuine Catholic spirituality for men must be Christ-centred, faithful to the deposit of faith and obedient to the Church’s Magisterium. A Christ-centred male spirituality fosters and nurtures growth in holiness, while strengthening and sustaining men in the constant struggle to live their faith every day. It encourages men to become defenders of a culture of life; inspires men to become faithful witnesses to the Catholic faith in a society that needs strong, masculine role models and to become loving servants of their wives and families, or – as priests and religious – loving servants of the Church; and develops an understanding and appreciation of the human body as the temple of the Holy Spirit. Catholic men’s spirituality is centred in Christ crucified and receives strength and life from the sacraments, especially the Eucharist.

b. Be Strong in the Lord.indd 7

Living an authentic male spirituality means that we must learn to listen to Godâ&#x20AC;&#x2122;s Word in Sacred Scripture and the sacramental life of the Church, and respond to that Word in faith through the Holy Spirit. It means embracing the cross in our own lives and meditating on what it means to make a complete gift of ourselves in loving sacrifice and service, since it is in giving ourselves away in love that we truly find ourselves in Christ. The temptations and challenges faced by men today are rooted in the inability to make ourselves vulnerable. The culture has convinced men that it is a sign of weakness to open ourselves fully and share our hearts and souls with others. Our role model, however, is not the culture but the Lord Jesus Christ. It is Christâ&#x20AC;&#x2122;s vulnerability on the cross that is the source and summit of male spirituality. We are truly fulfilled as men when we make a firm commitment to live Christâ&#x20AC;&#x2122;s Paschal Mystery. There is no Resurrection without Crucifixion. We must learn to take hold of the cross in our lives. The cross is the hermeneutic of male spirituality. Only when we begin to understand the gift of vulnerability lived from the cross will we know what it means to be a man of God. God will imbue us with the courage to live as the person he created us to be: made in his image and likeness.

b. Be Strong in the Lord.indd 8

Biblical Manhood By prayerfully reading the Bible, men can have a profound encounter with God. The Catholic man will begin to see himself and his life in the pages of Scripture, and then use this knowledge to grow spiritually as a man of God. God is the author of Scripture; it is God telling his story, although he uses human authors as instruments. God reveals himself in salvation history for the purpose of inviting us into intimate, personal, loving and life-giving communion with him. Some passages in the Bible (especially in the Old Testament) appear confusing because we are trying to read it with a twenty-first century mindset. This is why the Catholic Church has a “both-and” approach to understanding and interpreting the Bible, known as the four “senses” of Scripture. The first is the literal (also called the literal-historical) sense. This does not mean we are to read every verse in the Bible and interpret it literally. Rather, the literal sense is about getting inside the author’s mind so we really understand what he is getting at. This is the typical method employed by commentaries on Scripture. The next three senses are grouped together and are known as the spiritual

b. Be Strong in the Lord.indd 9

senses of Scripture. These are where we seek to discover what God is intending to say through the Bible. They are called the allegorical, tropological and anagogical senses (see the Catechism of the Catholic Church – henceforth CCC – 117). The allegorical sense allows us to acquire a more profound understanding of biblical events by recognising their significance in light of Jesus Christ. The crossing of the Red Sea in Exodus 14, for example, where the Israelites escaped from slavery in Egypt, is seen allegorically as a precursor to Baptism where, by his death and Resurrection, Jesus frees us from slavery to sin and death. The tropological or moral sense points out how we ought to live and act. In the anagogical sense, we view realities and events in the Bible in terms of their eternal significance, leading us towards our true homeland, the heavenly Jerusalem. Men of God in the Bible The fourfold interpretative senses are fluid and dynamic since the full meaning of Scripture is itself inexhaustible. The better we know Scripture, the more we can see ourselves on every page. God’s story is also our story. God made us so that we might participate in his life. The ultimate goal of understanding God’s revelation in Scripture is personal transformation and intimate union with our Lord Jesus Christ.

Be strong in the lord preview

Be strong in the lord preview