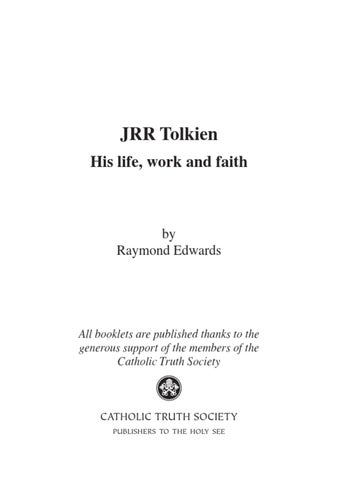 “Out of the darkness of my life, so much frustrated, I put before you the one great thing to love on earth: the Blessed Sacrament... There you will find romance, glory, honour, fidelity, and the true way of all your loves on earth, and more than that: Death: by the divine paradox, that which ends life, and demands the surrender of all, and yet by the taste - or foretaste - of which alone can what you seek in your earthly relationships (love, faithfulness, joy) be maintained, or take on that complexion of reality, of eternal endurance, which every man’s heart desires.” “The only cure for sagging or fainting faith is Communion. Though always Itself, perfect and complete and inviolate, the Blessed Sacrament does not operate completely and once for all in any of us. Like the act of Faith it must be continuous and grow by exercise. Frequency is of the highest effect. Seven times a week is more nourishing than seven times at intervals.” The Letters of JRR Tolkien, pp. 53-54, 338-339.

Introduction It is late in the year; under the vast domed Great Hall of the new University of Birmingham, rows of temporary beds are set up, filled with sick men, most newly back from France. One of them is writing in a small school exercise book. The year is 1916, and he has been some months with his battalion on the Somme. Already many of his school and university friends have been killed. Compared with them, he is lucky; he has been struck down with a debilitating persistent fever, spread through the trenches by the ubiquitous lice. He is getting better, now, although still weak and exhausted and unfit to return to his unit. Soon, he will be discharged, and able to go to a Staffordshire village to stay with the wife he had married only eight months ago, two months before he was sent to France. Meanwhile, he is writing: stories of an age of myth, of elves and dragons and love and despair and hope lost and renewed. His name is Ronald Tolkien. The stories he wrote at this time were not published for another seventy years; but the themes and characters he described in them gradually found shape and led directly to his famous books, The Hobbit and The Lord of the Rings. Here, whilst first recovering in hospital, then on a

series of home service postings, began his life’s work: a corpus of imaginative writing whose overmastering theme, he declared late in life, was Death. Tolkien is now best-known as an author - his published writings run to twenty or so thick volumes - but he was many other things beside: husband, father to four children, professor of ancient language at Oxford, devout Catholic. How did he combine all of these things? How did his writing connect with the rest of his life, and his work? What sort of man was he, who arguably changed forever the sort of books that are written, and read? It is probably impossible to answer all of these questions, especially in a booklet of this size; but I hope to give hints about some possible answers, and some helpful places to look. Many readers of his books, and even more those who have seen the film adaptations, may not realise that Tolkien was not just a practising Catholic, but one whose faith was utterly central to his writing. I will look, briefly, at some of the ways this is true. Some converts to Catholicism have said that reading The Lord of the Rings helped to ‘baptise’ their imagination, or prepare their souls for the gift of faith, despite the absence of any explicit reference to Christianity in the work. As we shall see, Tolkien himself admitted that it was “a fundamentally religious and Catholic work”; at times he seems to have felt divine providence had a hand in the writing.

I have assumed that anyone reading this booklet is likely to have read, or at least seen the film versions of, The Lord of the Rings and The Hobbit. Accordingly I presume some knowledge of what happens in the books, and have not given extensive discussions of them. There are plenty of good books that do this; some are listed in the section on Further Reading.

The Making of a Philologist “I’m a philologist,” said Lowdham, “which means a misunderstood man.”1 Family It may surprise some to learn that Tolkien, in many ways a quintessentially English writer, was born in South Africa. Despite his surname, the German in his background was minimal;2 the Tolkiens were solid Birmingham middleclass, whilst his mother’s family, the Suffields, were originally Worcestershire farming stock. His grandfather, John Tolkien, had been a piano maker; his business failed, and he turned to selling music. He had four children; his wife died, and he then remarried. Tolkien’s father, Arthur, was the eldest child of this second marriage. Arthur had been working for Lloyds Bank in Birmingham for some years when, in 1888, aged thirty-one, he met Mabel Suffield and they became engaged. She was only eighteen, however, and her father (once a prosperous draper, now, after his business had failed, a commercial traveller for Jeyes Fluid) forbade her to marry for two years. The following year, Arthur Tolkien sailed for South Africa, where he had got a job with the Bank of Africa in Cape

Colony; the next year, he was made manager of their branch in Bloemfontein, capital of the Orange Free State. He had significantly more responsibility, and better pay, than he could have hoped for at home. This made marriage possible; in March 1891, Mabel, who was now twentyone, took ship for South Africa. On 16th April, she and Arthur were married in the Anglican Cathedral in Cape Town. They lived in Bloemfontein, in a house attached to the bank where Arthur was manager. There, on 3rd January 1892, their first child was born. He was christened John Ronald Reuel. Two years later, his brother Hilary was born. Arthur Tolkien enjoyed the African climate; his wife did not, and was moreover concerned that Ronald was suffering from the constant heat. In April 1895, accordingly, she took both boys home to England for an extended leave. Arthur stayed in South Africa; he could not afford to leave his job for any amount of time, but hoped to come and join them before long. That November, he fell ill with rheumatic fever, and could not face the rigours of a voyage and the English winter. Mabel and the boys spent Christmas with her family. In January, after a short recovery, Arthur fell ill again; Mabel decided she must return to South Africa to look after him. Before she could make arrangements, however, Arthur suddenly deteriorated. On 14th February 1896, Mabel received a telegram saying he had had a haemorrhage and she should expect the worst; the next

day, he died. Arthur Tolkien was only thirty-nine. Mabel Tolkien was twenty-six; her sons, four and two. Thereafter his mother brought up Ronald and his brother alone. They lodged in a semi-detached cottage in the small village of Sarehole, then a mile or so outside Birmingham. It is now a suburb of the city, but in 1896 was a real country village with a watermill, a river, and strong thickets of trees. Mabel had always been an active churchgoer; she became involved, now, in a ‘high’ Anglo-Catholic parish. This led her to Catholicism; in 1900, along with her sister, she became a Catholic, and was summarily disinherited by her family.3 Orphaned and educated Mabel was an intelligent and highly literate woman; rather than send her boys to school, she taught them herself. This also helped her financially; she had only a small income from some shares left by Arthur. As well as conventional subjects, she taught them botany and drawing (both of which were interests that stayed with Ronald throughout his life), and gave them a grounding in languages: French, German and Latin. From the first, it was clear that Ronald had a strong talent in this area. In 1900, Ronald was sent to his father’s old school, King Edward’s School in Birmingham, an ancient grammar school, and probably the best in the area. The fees were paid

A biography of the most popular Catholic storyteller and novelist of the twentieth century.