Way of the Cross (Sample) 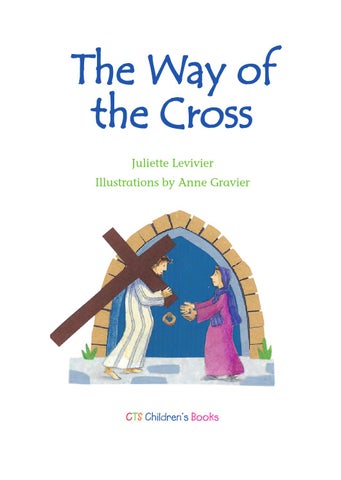 The Way of the Cross Juliette Levivier Illustrations by Anne Gravier

Where the way of the Cross comes from

In the hope of the Resurrection

How to pray the way of the Cross

Holy week Jesus went to Jerusalem to celebrate the Passover, as he did every year. This year though, when he entered the city with his disciples, a large crowd came out to meet him shouting, â&amp;#x20AC;&amp;#x2DC;Hosannah! Blessed is he who comes in the name of the Lord!â&amp;#x20AC;&amp;#x2122;

IT IS Palm Sunday 4

This is how he told them that he was going to give his life to save all men.

IT IS Maundy Thursday

A little later, during the night, Jesus was arrested while he was praying in the Garden of Gethsemene. He was brought before the court and condemned to death.

Then he was whipped and insulted. They mocked him, putting a crown made of thorns on 6

Then he was led to a hill, not far from the city, to be crucified. At three oâ&amp;#x20AC;&amp;#x2122;clock in the afternoon, Jesus died on the cross.

After his death, his friends placed his body in a tomb.

IT IS Good Friday

Jesus was dead. Everything was over. Jesus, who brought the love and peace of God his father to all, Jesus who had never committed any sins, had been put to death as a criminal.

So all those who loved him and who 8

believed in him were immensely sad. They felt abandoned and lost.

IT IS Holy Saturday

Very early the next morning, some women, and then some disciples, went to the tomb. It was empty!

Jesus was not there anymore. He is risen from the dead!

Love has overcome violence and death.

IT IS Easter Morning

Where the way of the Cross comes from It was in Jerusalem that Jesus suffered his passion and died on the cross, giving his life for us to save us from sin. It was there too, three days later, that he rose from death.

A short time later, the first Christians started to go on pilgrimage to Jerusalem to pray at the place 10

In the 14th century some Franciscan monks decided to recreate this ‘way of the passion’ inside churches, for all the people who couldn’t go to Jerusalem.

That’s why, today, there is a way of the Cross in every church. 11

In the hope of the Resurrection The way of the Cross has fourteen stages called ‘stations’. Each one is represented by a picture or a statue or a simple wooden cross. Some of the stations are episodes spoken of in the gospels, others are not but they come from a very old tradition. 12

The way of the Cross ends with Jesus being laid in the tomb.

It would be very sad to stop there because it’s the hope of the Resurrection which accompanies us throughout the way of the Cross.

That’s why the fifteenth station speaks of Easter Morning

Jesus invites you to follow him When you follow Jesus on this way you can begin to see how incredible his love for you is.

When you pray the way of the Cross, Jesus invites you to change your heart to love as only he can love.

For you! Maybe you have a nice cross on the wall above your bed.

Each time you go into a church, the first thing you do is make the sign of the cross.

This gesture is a prayer. It reminds you, like the cross in your room, that Jesus died and rose 14

to life so that you can have life.

You pray the way of the Cross on Good Friday, but you can also pray it in your family, for example on the Fridays of Lent.

How to pray the way of the Cross Sit or kneel down and try to keep still. Read the title of the station, and then say: ‘We adore you, O Christ, and we praise you because, by your cross, you have redeemed the world.’

In silence, imagine the scene, the noises, the people, the face of Jesus and those who meet him. You can imagine you’re with Mary or that you are one of the people who are with Jesus. What prayer comes into your heart?

You can slowly say the prayer that is under the picture.

Jesus is condemned to death

Pilate â&amp;#x20AC;Ś having ordered Jesus to be scourged, handed him over to be crucified. Mark 15:15

How beautiful is Jesusâ&amp;#x20AC;&amp;#x2122; gentleness in the face of those who want to kill him. How patient he is. How serene. He answers calmly, but who believes he is the Son of God? They refuse to listen to him; they accuse him of blasphemy. But how could he speak badly of God? He is the Word of God.

When I condemn others, when I judge them, itâ&amp;#x20AC;&amp;#x2122;s you, Jesus, I am rejecting. Lord Jesus, you have never condemned anyone. Teach me to love as you alone know how to love.

Way of the Cross (Sample)