The Special Gift of Women preview 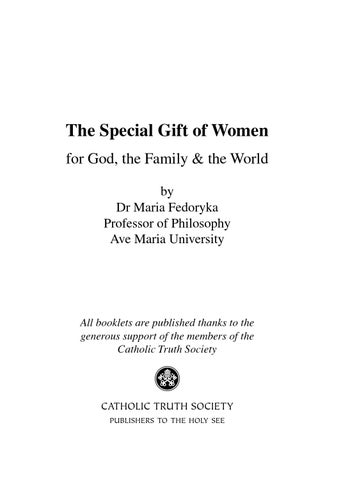 The Special Gift of Women for God, the Family &amp; the World by Dr Maria Fedoryka Professor of Philosophy Ave Maria University

Introduction The human person is a being of extraordinary dignity. All of creation reflects God, revealing in some small way His majesty, His goodness, His beauty. But the human person is not only a reflection of God, revealing Him in distant and weak way, but has been created in His very “image and likeness”. This means that man glorifies God incomparably more than any other of His creatures. How so? All other creatures glorify God simply through the gifts that God has given them; all that they have, comes directly from Him. But in the case of the human person, something extraordinary takes place: the human person has the privilege of himself contributing to God’s glory – with his understanding and especially with his freedom. The glory that God receives when man becomes good far exceeds the glory He receives from the brightness of sun, or the loveliness of the flower, or the majesty of the mountains. Nothing in creation is more beautiful than a person shining with virtue – that dazzling jewel that comes to be only in the soul that has cooperated freely with God’s gifts. With this in mind, we turn to considering “the gift of woman” – a phrase which for us takes on a double

meaning: we will consider what it is that the woman has received from God as a gift entrusted to her, which she then returns to Him, developing and bringing it to perfection – for God’s glory, for the good of those whose lives she touches, and for her own happiness. We find the following striking passage addressed to women in the Second Vatican Council’s closing speech: As you know, the Church is proud to have glorified and liberated woman, and in the course of the centuries, in diversity of characters, to have brought into relief her basic equality with man. But the hour is coming, in fact has come, when the vocation of woman is being achieved in its fullness, the hour in which woman acquires in the world an influence, an effect and a power never hitherto achieved. That is why, at this moment when the human race is undergoing so deep a transformation, women impregnated with the spirit of the Gospel can do so much to aid mankind in not falling.1 These stirring words cannot fail to touch in the depth of her being the woman who reads them. We find here expressed on the one hand the great dignity of the woman: she is a creature whom “God has willed for its own sake”, in the words of Gaudium et spes.2 This means that her dignity is so great, that it does not come from being useful for some purpose beyond herself. Her

dignity is found in her simply because of who she is – a creature who reflects God in her own completely irreplaceable way. This means that she may never be used as an instrument by others, who would use her for their own ends, taking away her freedom. She has the privilege and the duty to direct herself freely to her destiny. But this passage is also saying something else, something that shows us how mysterious and paradoxical the human person is: it is telling us that the woman will become fulfilled only if she makes a gift of herself to others. Above we saw Gaudium et spes telling us that “man is the only creature on earth that God has willed for its own sake”. But it then immediately adds, “and man cannot fully find himself except through a sincere gift of himself.”3 We hear echoed here Christ’s words, that “unless a seed fall to the ground and dies, it will not bear fruit”. What is true in the world of nature is even more true in the world of persons: it is only when we live for others, in a sense “forgetting” ourselves – it is only then that we become fulfilled. It is only then that we shine with virtues, which are the truest adornment of the human soul. The encyclical Mulieris dignitatem – translated as “The Dignity of Woman” – discovers every woman’s vocation by looking to the greatest woman, the Blessed Virgin Mary. John Paul II writes: “the special presence of the Mother of God in the mystery of the Church makes us

think of the exceptional link between this ‘woman’ and the whole human family.”4 Mary plays a central role in her service to the Church, which forms all of humanity for its destiny in God. Reflecting Mary’s role, all woman are called to give themselves to others, playing a crucial role in the formation of humanity.

Male and female: two ways of being, two vocations Male and female All persons are made in the image and likeness of God, but we find, mysteriously, that humanity is divided into two kinds of persons: man and woman. Let us think about this for a moment. We could say that every person is “three dimensional”, with 1) the dimension of human nature, 2) the dimension of being male or female, and 3) the dimension of individuality. On the deepest level, all persons are identical, simply in having a human nature. On the third level, in their individuality, each person is entirely unique, wholly different from every other person, and therefore completely irreplaceable. But we could say that between these two dimensions, there exists a third one, a dimension in which humanity is divided into two “modes”: every human person exists as masculine or as feminine, as a man or as a woman. These are often referred to as the two genders. While men and women have in common all the features of human nature, masculinity and femininity permeate their entire being, “coloring” the soul, the psyche, and the body of each.

Some contemporary trends would have us believe that masculinity and femininity are nothing but a social invention, something that we acquire simply through the pressure of customs that happen to be adopted by a community. It is true that our environment plays some role in who we become as men and as women in certain aspects of our life; and one cannot accept a notion of masculinity and femininity which is so narrow and fixed as to deny of men and women abilities or characteristics that are proper to every person as person. But the deepest and most important characteristics of masculinity and femininity are clearly not fabricated by our conventions, and exist in human persons prior to the influences of society. Those who would deny this have the difficult task of going against the evidence of all ages and all cultures, not to mention our own experience. The differences between man and woman manifest themselves too early to be socially conditioned, and form too fundamental a part of our being to have been created merely by social convention. In fact, however, masculinity and femininity are first and foremost spiritual characteristics, that reflect something of Godâ&amp;#x20AC;&amp;#x2122;s being, something very significant. St. John tells us of the great mystery hidden from the ages, revealed in Christ: that God is Love. He is a trinity of persons, made up of an eternal movement of complete and perfect self-giving and receiving (the Father and the Son)

from which springs another person as its fruit (the Holy Spirit). By a marvelous invention, these two gestures of love are translated into two ways of being a human person, in God’s creation of humanity as man and woman. While our fallen human condition makes it often seem that man and woman are pitted against each other, we see that the original and true meaning of this division is that a unique love union should be possible between them in marriage. Rather than being opposites, as certain feminists might have it, the difference between them should be characterized as complementary. We could call it a “friendly difference”, like two notes that are different yet harmonious, each one as it were showing the other to its best advantage. Besides the union in marriage which the difference between them makes possible, it is the case that man and woman give joy to each other, simply in being different in this complementary way. The world is more wonderful place for men because of the presence of women in it, and a more wonderful place for women because of the presence of men. The difference between men and women has another side to it: each is an enrichment for the other. The gifts of men and women are different – and these gifts enrich not only the one possessing them, but others as well, as man and woman give of themselves in service. The strengths that each one has equips them for different forms of

service to those around them – for it is for service that their gifts were given to them. This means that men and women, while both are called to live all the virtues, each becomes a witness to the other of the virtues that come from their gifts, and remind the other that he is called to live these virtues as well. It also means that they are each called to different tasks or roles – the tasks that require the special strengths that each has. Different gifts reveal different vocations What, then, are these different ways in which men and women serve humanity? To discover them, we look to the deepest service that man and woman can offer to God and to other persons: the service of fatherhood and the service of motherhood. These, in turn, are inseparably connected to the state of being husband and wife. Let us look at this more closely. However it is lived, whether physically in marriage, or spiritually in consecrated virginity, married love – the love between husband and wife – is what brings the person to his highest fulfillment. This is because married love is the total self-gift of one person to another – and as we saw, self-giving is the vocation of every person. If we reflect on this, we see that the love between husband and wife comes to its fulfillment when they become parents. What happens when the two becomes parents, and why is this a fulfillment of their love? The

coming to be of the child is an overflow of the spousesâ&amp;#x20AC;&amp;#x2122; love for each other. It is as if this love is so deep, and so great, that it cannot contain itself, and wants to share itself with a totally new being, to draw that new being into the love! It is here, when love reaches its end point in the child, that the different roles of man and woman stand before our eyes in a new and clear way. The father and the mother are both to care for the child, but each does so in a way that is proper to their gifts. And so it is in reflecting on motherhood, the highest expression of femininity, that we discover the special gifts and the vocation of women. This is true, whether the woman is a mother biologically, or only spiritually; motherhood is an attitude of the heart, to which all women are called. We will reflect on motherhood, to discover the qualities unique to the woman, by which she will serve humanity.

The Special Gift of Women preview