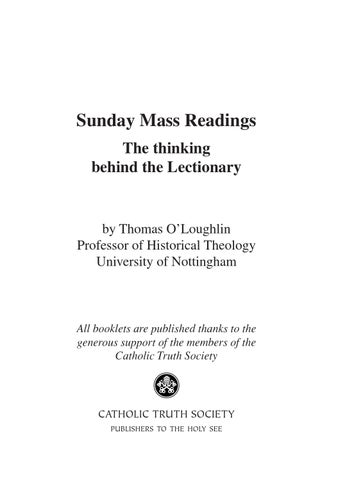 Sunday Mass Readings The thinking behind the Lectionary

by Thomas Oâ&amp;#x20AC;&amp;#x2122;Loughlin Professor of Historical Theology University of Nottingham

A Reading Plan A reading from … On any Sunday morning millions of Catholics will hear at least four passages from the scriptures. Typically, this will include: • a passage from a book written before the time of Jesus (e.g. a reading from the Book of Numbers) • a hymn which may have been composed for the liturgy in the temple in Jerusalem (what we refer to as ‘the Responsorial Psalm’) • a short passage from a letter by the one of the first generation of Christians written to encourage their fellow Christians or explain aspects of discipleship to them (e.g. a reading from the Letter of Paul to the Romans) • a passage from one of the gospels: this will hold pride of place, it will be listened to standing, begun and ended with music, and sometimes the act of reading will be enhanced with a procession of the book, and then the book will be incensed and flanked with candles. On any Sunday the same readings will be heard in every Catholic community around the world; and in an increasing number of other Christian communities as well.

What these readings mean is the work of a lifetime; but finding out how these particular readings were chosen for this Sunday is a simpler task. Answering that question is what this booklet is about. Knowing how and why the readings we read were chosen, is also a first step towards having a better appreciation of them. Readings are not just random You may have heard such a selection of readings on umpteen occasions, and, indeed, may have been the reader many times. If so, have you ever wondered how they were chosen for that particular Sunday? The first point to note is this: they have not been randomly chosen by the priest or the preacher. Many people think this would be good idea. So, if there was a very sad story in the news that day, some ‘appropriate reading’ could be chosen. Likewise, if the day is a lovely summer’s day we could have some ‘nice reading’ – the Beatitudes from Matthew 5 for example – then a simple, short sermon and off we could go and enjoy God’s creation! Some priests also have the idea that some of the readings are ‘too difficult for ordinary people’ and think they could make better choices or improve on the official choice by cutting out readings. While these intentions are praiseworthy, the results are, in the longer term, dismal. Whenever the choice of readings is left to an individual, the resulting choice ends up with a narrow range of texts that reflecting particular likes and

dislikes. Our faith comes thorough human channels and has a complex history: the larger the range of readings the better. Our faith is also larger than today, this moment, and this feeling: so we need to access the difficult with the easy, the challenging with the comforting, the hard messages as well as those we like. Moreover, we are not just individuals or a just a group who happens to be in the same place: we are the Church, and each church is part of the whole Body of Christ: and so hearing the same stories, reflecting together on the tradition, helps us to grow as people and as one people who are charged with being the heralds of the Good News to our generation. So to avoid: • having a narrow range of favourites • one person’s ‘take’ on what is important • manipulating the liturgy to make particular points on specific occasions Having the Sunday readings set out for us helps us to: • access a wider range • take the rough and the smooth of the traditions together • access the gospels in the sequence like that in which the evangelists first proclaimed them • have a link with the whole Church reflecting on the good news The book that sets the readings – you may have read from it or have seen it carried in procession – is called a lectionary. Our present lectionary appeared in 1969 and is

one of the great products of the restoration of the liturgy that was initiated by the Second Vatican Council (19625). However, despite being over forty years’ old – and gaining new and enthusiastic admirers every year among Christians who are not Catholics – it is probably among the least appreciated and studied book of the entire liturgy. By now some basic questions should have come into view: • what exactly is a lectionary • why was one reading chosen and not another • do the choices for Sunday after Sunday reveal any underlying plan • is it worthwhile trying to appreciate this plan • why do we have readings anyway • why do we have such strange combinations on some Sundays These are the questions that this booklet sets out to answer. What is the lectionary? The lectionary is the book that presents the contents of the scriptures, those ancient writings that Christians hold in reverence for reading at their assemblies, in such a way that portions of text can be read on particular days, for particular events, or in particular situations. A lectionary could be as simple as a list of references which could then be looked up in a bible, the beginning and end of the appointed passages marked, and then the passage read from there. However, for convenience these portions are

better printed out with introductions and conclusions, and then arranged in sequences with the all the readings (Old Testament, psalm, epistle, gospel) for a particular liturgy gathered into one place. There have been many lectionaries over the last two millennia. Our lectionary was planned in the late 1960s as part of the renewal of the liturgy begun by the Second Vatican Council and was first published in 1969 (a second edition with some additions was then published in 1981). It is one of the most carefully planned lectionaries ever, and presents an enormous range of passages for regular use during the two great seasons of Lent/Easter and Advent/ Christmas, and during the rest of the year. It is this last set of readings for the rest of the year, for those Sundays that go to make up â&amp;#x20AC;&amp;#x2DC;Ordinary Time,â&amp;#x20AC;&amp;#x2122; that is the focus of this booklet. Why do we use a lectionary? Obviously, the simplest way to build a lectionary is to opt for a continuous reading of texts: begin a book one week and read one story or incident, then the next time we assemble, read the next passage. This has the advantage of allowing biblical books to be appreciated whole, and it avoids the ever-present temptation to skip over unpleasant bits. To stop us missing out the bits we do not like, or find difficult, is the basic reason for having formally chosen readings. It also means that on any Sunday, right around the world we are listening together.

Given that the gospels are episodic in structure – meaning that we hear of what Jesus did or said on one day, then later we hear what he did later in the next town – this method of continuous reading is ideally suited to them: read one story/incident today, then move to the next tomorrow or next Sunday. However, given that the liturgical year is fundamental to Christian liturgy – a component of practice already established by the time the Acts of the Apostles was written (roughly around 100 A.D.) – the method of continuous reading cannot hold unrivalled sway. Could one read a parable text on Easter Day just because it was the next reading in a sequence? The very fact that the rudiments of the liturgical year predate the gospels has meant that the nature of the day – for example, if today is the day of Pentecost – determines the reading if there is a reading anywhere in the New Testament that is linked to the day we are celebrating. Therefore, at Christmas we need to hear of Bethlehem; at Easter of the resurrection; and on 6th August of the transfiguration. So in our lectionary we use a combination of: • continuous reading of the gospels for “Ordinary Time” • themed readings for the seasons of Lent/Easter and Advent/Christmas • specific readings the great celebrations which link to the accounts in the gospels to the feasts

The three-year cycle Although the lectionary has to have a themed element (for Christmas and Easter at the very least), it is still desirable that as wide a range of texts as possible be used in the liturgy. The system worked out to achieve this in our lectionary is complex, elaborate, and on a scale never before attempted in Christian liturgical history. It is this sophistication – at once the inevitable need to blend continuous reading with readings fitted to feasts is recognised – that has made it such an achievement. So on certain days in the year when key moments in the Christ-event are to be celebrated, the readings are the same each and every year: the Passion according to John in the Good Friday Liturgy, is the best example. Then there are the ‘themed’ choices for Christmas and Easter, and to a lesser extent for Lent and for Advent: but the readings are varied over a cycle of three years for the Sundays and other major feasts. Outside of the special seasons, in ‘ordinary time’ the selection is based on continuous reading of the gospels. Moreover, the material is spread over a three-year cycle to give a greater variety of gospel material than ever before. Each year we read one of the evangelists, Matthew, Mark, and Luke (and we read John during the special seasons with some other passages read alongside Mark. Reading one gospel per year is a simple device that gives us a three year cycle: