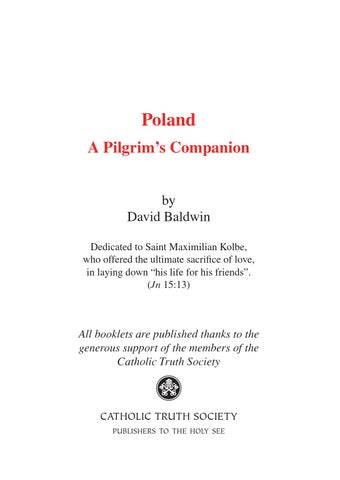 Poland A Pilgrim’s Companion by David Baldwin Dedicated to Saint Maximilian Kolbe, who offered the ultimate sacrifice of love, in laying down “his life for his friends”. (Jn 15:13)

b. Poland A Pilgrim's Companion.indd 1

b. Poland A Pilgrim's Companion.indd 2

Why Poland? On the face of it Poland may not be the most obvious place to venture on a major pilgrim journey. I went with only rather hazy expectations and a general sense of curiosity. Yet this was the place from which St John Paul II hailed - preceded by modern saints about whom I knew a little, and instinctively admired - St Faustina, associated with the Divine Mercy, and St Maximilian Kolbe, martyred at Auschwitz. Little did I know the wider treasures that awaited me, which gave such surprise and inspiration as my journey unfolded. This small book is your invitation to have a look at the Poland that I discovered through pilgrim eyes, and for you to examine the case for going there - so that at least you can have some facts, and a â&#x20AC;&#x2DC;tasterâ&#x20AC;&#x2122;, before deciding. This is not a guide book in the conventional sense. It will reinforce any other regular guides you may use on your travels; it may point out aspects not covered elsewhere. At some venues it may be all that you have in English - not all the Polish sites are geared extensively for the English speaking visitors - which, ironically, is part of the charm of these places. This book necessarily concentrates on the pilgrim aspect of your visit and, as such, includes accompanying meditations and prayers. There are, of course, many other attractions that may, quite rightly, also catch your attention.

b. Poland A Pilgrim's Companion.indd 3

A Catholic country Apart from being an attractive ‘European style’ country to which you can relate, it is still very much a Catholic country, with a largely devout and faithful population. Of course, the incursion of modern Western life is beginning to have an impact since Poland joined the EU in 2004, but it is still a place where Christianity is an important ingredient of daily life. This is generally very much in evidence with the abundance of active churches, the struggle to keep Sunday special, the frequency and importance given to Adoration of the Blessed Sacrament, and the bulging seminaries - the priests all look so young! The high and intense level of Marian devotion also struck me. Major devotions and intercessory prayer are centred round Our Lady, usually through the ‘windows’ of prominent holy icons. Many churches throughout the land are dedicated to her - as will become evident as you follow this book. Variety of pilgrim destinations With that as background, Poland also offers some significant, specific pilgrim destinations, linked with events and people, that lend a dimension of international interest. They are of relevance to our world, and have, and will continue to have, a bearing on our own Christian lives. Most of these pilgrim places are conveniently centred in and around Kraków - itself a very attractive city in

b. Poland A Pilgrim's Companion.indd 4

the broadest sense - and of which the pilgrim element is explored in detail in ensuing chapters. Like it or not, cut price airlines offer cheap and accessible entry for the independent pilgrim. In Kraków itself, there is the beautiful, eccentric Royal Cathedral, an impressive Basilica to Our Lady, and a host of interesting churches and places within easy reach. All portray different aspects of Catholic life through the history of the Church and of Poland. In the southern suburbs, at Łagiewniki, is the striking, huge, brand-new Basilica of the Divine Mercy, where St Faustina’s mortal remains rest, and from where the inspirational devotion to the Divine Mercy has spread world-wide. Close by is the newly built John Paul II Centre, with a wide range of facilities, commemorating Poland’s renowned Pope-Saint. In the north eastern suburbs there is the vast ‘new town’ of Nowa Huta, a communist inspired social development. Here there are some extraordinary churches - some old - but others built with blood, grinding toil and dedication during the communist regime, including the most remarkable Ark of Our Lord, the Arka Pana. Not far outside Kraków are the extensive underground Salt Mines at Wieliczka, where you will see within the underground mine workings an exquisite, sizeable chapel carved entirely from salt. Also within an easy bus or boat ride to the west, is the heavily fortified eleventh century Benedictine Abbey of Tyniec, dominating the River Wisła, below.

b. Poland A Pilgrim's Companion.indd 5

Further afield, a short, linking train-ride from Kraków will take you to the extensive, rurally placed Stations of the Cross with its Baroque Bernadine Basilica at Kalwaria, and then on to the small, charming town of Wadowice, St John Paul II’s birthplace. Not far to the north west of Kraków is the town of Częstochowa, over which the fortress monastery of the Pauline monks of Jasna Góra looms, housing the miraculous icon of the Black Madonna - the spiritual heart of Poland. And then there is Auschwitz - that grim testament to man’s limitless inhumanity to his fellow man - that needs to be visited, and prayed at, as a salutary and sobering reminder. People Then there are the people that constantly weave in and out of this tapestry: St John Paul II, St Faustina, St Maximilian Kolbe, St Teresa Benedicta of the Cross (Edith Stein) - all known to us as Catholics, all having an impact on our lives somewhere along the line. There is also the heroic Father Jerzy Popiełuszko of Warsaw, possibly not so well known, murdered by the communist regime in 1984. Geography Poland is situated at the southern end of the Baltic Sea, surrounded by Germany to the west, the Czech Republic and Slovakia to the south, Ukraine and Belarus to the east, with Lithuania and the Russian enclave of Kaliningrad to

b. Poland A Pilgrim's Companion.indd 6

the north. In area it is a fifth again larger than the United Kingdom, with a population of 38.5 million people centred mainly on cities and medium sized towns, and of which 90% is Catholic. Inland, it has a temperate continental climate with warm summers and cold winters. A turbulent history Surprisingly little detail is known about Polandâ&#x20AC;&#x2122;s history before 966 - most of it having to rely on rather scant archaeological finds rather than any record or human testament. Archaeology has shown signs of people living there in the Stone, Bronze and Iron Ages, but of uncertain ethnicity, thought to be Germanic, Celtic and Baltic tribes. What is known, is of a turbulent, fractured, everchanging place. At its most powerful, it had huge territories and close alliances reaching wide into Ukraine, Russia and the Baltics; at its lowest, it existed in ideal only, with its neighbours on occasions having attempted to wipe it off the map. Yet despite this, a unique Polish culture and ethnicity have survived and developed throughout the centuries, and this is very evident today. Christianity Strangely, it is reported that Christianity initially came in the form of a Slavonic mission of the Greek Oriental Church, in the middle of the tenth century. Coincidental with this was the emergence of a recognisable single,

b. Poland A Pilgrim's Companion.indd 7

territorial entity with the institution of a monarchy. The first king, Mieszko I, in accepting the Christian faith, was baptised in 966 (â&#x20AC;&#x2DC;The Baptism of Polandâ&#x20AC;&#x2122;), and Christianity was vigorously promoted throughout the nascent state, with the first Polish bishopric being established in PoznaĹ&#x201E;. After some short decades Poland - a Slavic, Eastern nation - sought union with the Western Church, and won recognition as an established European state, both from the Papacy and the Holy Roman Empire. In the first centuries of its existence the nation was led by a series of strong monarchical rulers, integrating this raw, young country into European culture. But by nature of its geographical and strategic location there were also many periods of complicated turbulence, with fragmentation, reunification and partition ebbing and flowing throughout the times. The late fourteenth century saw a strong association with Lithuania, of which there is much evidence, even today. There was also a strong migration of Jews into the area, Poland being a tolerant and protective society to all migrants. World Wars The outcome of World War I destroyed the might of Germany, Russia and Austro-Hungary, and allowed Poland to shake off these predators on her borders. Poland was formally reconstituted and recognised as a unified state. World War II spelt a major disaster for Poland;

b. Poland A Pilgrim's Companion.indd 8

the predators returned: it was split into two occupied zones - Soviet and German. A government in exile was established in London. Of the countries involved in the War, Poland lost the highest percentage of its citizens: over six million perished, half of them Polish Jews. Probably quite unknown, Poland made one of the largest troop contributions to the Allied war effort. After the War the communists instituted their totalitarian regime, in which democracy and Christianity were stifled. Many opposition leaders, including priests and religious were persecuted, jailed, and some murdered. Eventually, through the pressure of the workersâ&#x20AC;&#x2122; movement, Solidarity, encouraged by St John Paul II, the Communist monolith started to collapse, leading to the return of democracy, emerging as a strong Catholic country in 1989, and membership of the EU in 2004. Practical thoughts A few practical thoughts. If you are a solo or independent pilgrim, recourse to some practical guide, such as the Rough Guide, would be very useful to help you plan your travel in detail. Getting around is relatively cheap and easy, may be a bit slow at times, but there is a reasonably well developed infrastructure for car, train or bus. Poland is not a place for vegetarians or weight watchers! Poles seem to be hearty eaters, and meat, particularly pork, seems to be a vital part of the diet!

b. Poland A Pilgrim's Companion.indd 9

English is not widely spoken, certainly outside cities. If in doubt, single out young people; either that, or lots of pointing at maps and words - you will always find eager helpers! If, on visiting a church, you find you are struggling with access or information, it is always worth, as with many continental churches, in heading confidently for the sacristy, which generally seems to be more available as a centre of help and information than our more remote sacristies. Seek out the Sister - usually bustling around somewhere - and although she may not speak a great deal of English, she may be willing to help you in your quest. Mercy and Reconciliation One of the specific reasons I personally went on pilgrimage to Poland was to somehow discover how (if?) one could reconcile the unspeakable horrors perpetrated at Auschwitz, and the concept - the actuality - of God’s infinite Mercy, as propagated from the Divine Mercy Shrine just a short journey away in Kraków. I sensed a strong incongruous tension here. An entirely providential meeting with a Polish priest gave me just such evidence of God’s Mercy. I believe I discovered this connection, and summarise this in the last chapter - Mercy and Reconciliation - a theme you may wish to explore. But you may, initially anyway, want to set a broader course, and just enjoy the variety and fascination that this country and its Faith offers. You may choose, as Pope

b. Poland A Pilgrim's Companion.indd 10

Benedict did in his visit in May 2006, â&#x20AC;&#x153;to inhale this atmosphere of faith in which you liveâ&#x20AC;Śto draw from the abundant fountain of your faith, which has flowed continuously for over a millennium, and I am confident that my pilgrimage during these days will encourage the faith that we share, both yours and mineâ&#x20AC;?. Whatever course you take, it is a place from which you will return strengthened, enlightened and encouraged. I do commend it to you.

b. Poland A Pilgrim's Companion.indd 11