Lourdes - A Place of Healing and Hope 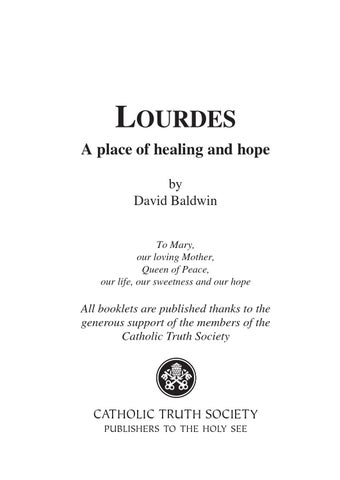 LOURDES A place of healing and hope by David Baldwin To Mary, our loving Mother, Queen of Peace, our life, our sweetness and our hope

FOREWORD Lourdes remains ever young. The Gospel message, in all its simplicity does not date. The natural features which play such an important role in Lourdes are universal and not constrained by time: water, the cave, the rocks and the light. Through the presence of so many of the sick and those who minister to them, through the diversity of languages and peoples, Lourdes has something to say to every person. During the last few years, television broadcasts have featured Lourdes, and always in a favourable light even if the supernatural element has been obscured. Today, many young people - about the age of Bernadette herself - find peace here. Together with the sick and the handicapped, they form a second privileged group of Lourdes pilgrims. Like many other pilgrimage destinations throughout the world, Lourdes remains popular. Yet those who come today often arrive as individuals or as members of informal small groups. With religious knowledge in general on the decline, it is necessary to give people of good will as much information as possible, and more importantly, help them enter into the profound reality of Lourdes. This little book will help to further these objectives. Its modest size reassures the reader who wishes to quickly familiarise him or herself with the Lourdes; the place, the

personalities, the events, the message and its history. There is no shortage of larger works available, should the reader wish to pursue his or her interests. Be assured that the priests and helpers of the sanctuaries will give you a warm welcome.  Jacques Perrier Bishop of Tarbes and Lourdes Feast of the Epiphany, 2004.

INTRODUCTION Lourdes must be one of the better known towns in modern Christendom; a great number of Catholics all round the world must have heard of it and what the name stands for. The estimated six million pilgrims going there each year certainly endorse this as one of the most popular pilgrim destinations of the Christian world. Yet, before the apparitions of the Blessed Virgin Mary to Bernadette in 1858, Lourdes was just another small, nondescript provincial town tucked away at the foot of the Pyrénées in Southern France, struggling to seek a modern identity that would successfully lead it into the twentieth century. History would otherwise have passed it by - as it does any other small provincial town - unknown to all, save those who live in the local environs. Similarly, Marie-Bernarde Soubirous, or Bernadette as she was known, was on the face of it, just another nondescript, small-town teenage girl in impoverished circumstance, seeking her identity in what she may have hoped would lead to many a young woman’s expectations of the time - good health, a sound education, maybe a comfortable, loving marriage, maybe children. But her life, and that of the town, was to change dramatically during, and subsequent to, a five month period from February to July, 1858, when this simple, illiterate

peasant girl of fourteen years was graced by God to receive His Mother, the Blessed Virgin Mary, in a series of eighteen apparitions. This small book seeks to give a comprehensive account of the extraordinary events that brought the two together, earning one the crown of sainthood, and the other as being a place of Healing and Hope. It is then for the reader - in sensing any unanswered questions, or in being prompted to seek a way ahead through pilgrimage, or in yearning to fulfil a need - to decide on the next step. “Ask and you will receive, and so your joy will be complete” (Jn 16:24).

LOURDES - 1850S The town of Lourdes sits in the lush, green, northern foothills of the Pyrénées. The hedonistic seaside resort of Biarritz is some 80 miles away to the West on the Atlantic coast. It is from this direction that the weather generally rolls in, with its variation of hanging, low clouds bringing damp and wet spells, to periods of peerless, scorching blue skies in the summer. The regional town of Tarbes, where the Diocesan Bishop resides, is some ten miles to the North, and the larger and better known spa town of Pau, is twenty five miles to the West. In administrative terms Lourdes was within the département of the HautesPyrénées, being within the Bigorre region, with the indigenous population speaking, at that time Bigourdan, their own exclusive variation of Occitan (langue d’oc). Being a small, relatively isolated mountain community, and with its proximity to the Spanish border just over the Pyrénées twenty miles to the south, the inhabitants were probably very happy to play one national characteristic off against the other when it suited, particularly when attempting to maintain their own cultural identity in the face of creeping ‘national standardisation’. A local historian specifically noted, “the inhabitants of Lourdes do not hold their beliefs cheap, and they do not abandon their grievances and their weapons quickly”.

A typical small town In the 1850s Lourdes had the status of a small town with a population of about 4,000. It previously held strategic importance in the Middle Ages, as confirmed by its eleventh century fortress still commanding the heights at the entrance of the Lavedan valley. A typical mix of smalltown commercial activities, from the staging of local markets, to the fostering of an emergent tourist trade for those visiting the Pyrénées, as well as working marble and slate in the nearby quarries, was evident. But like many towns transiting the nineteenth century, its journey was being beset by a background of economic slumps, a decline in the traditional ways of earning a living and increasingly fierce competition in job markets, all hallmarks heralding the significant social and economic changes taking place in the early nineteenth century. Despite progress on these fronts, the area was still being affected by age-old scourges of pestilence periodically affecting the crops and giving poor harvests, and prevalent illness, chiefly in the form of tuberculosis and cholera. In 1854 these two afflictions of pestilence and disease conspired to give a particularly hard year in the Hautes-Pyrénées. In terms of population there was quite a contrast: on the one hand there was a prosperous and educated section of the community, with a desire for learning and progress, and with the means to achieve this, as evidenced by the four schools and town newspaper; on the other, there was a

disproportionately large, poor, peasant population, with their roots still firmly set in the traditional ways, with little access to regular, quality education or formal employment opportunities. This population contrast was also reflected by the mix of slum areas with the prosperous; medieval buildings with modern. The living quarters for the poor of Lourdes tended to the low lying areas of the old town prior to expansion and modernisation. There was, also, alongside the prosperous and the industrious, a reputation for violent crimes, noted as quite common in the mountain communities of those days. As reported in Therese Taylor’s book, ‘Bernadette of Lourdes’, “Even women engaged in public brawls, and murders were committed in every day disputes, such as the sale of land or the theft of a sheep”. A darker side The town also had a reputation for recalcitrance to outside authority, including the Church. For despite being, on the face of it, ‘a desirable parish’ with a reasonable standard of living and a large congregation, there was latent friction between the parishioners, determinedly fixed in their ways, and the priests who had to tolerate this. The local diocesan authorities, responsible for provision of parish priests reportedly came to “dread the very mention of its name”. The people of Lourdes were the butt of regional humour, exemplified, for instance in badly prepared or cooked food being described as ‘Lourdes cuisine’.

Whilst not specifically mentioned by name, there was a history - again as seemingly befits isolated communities - of witchcraft and sorcery in the local areas, and various witches were known in and around Lourdes, often sought out for their charms and cures. The last attempted witch burning in France was reported as being perpetrated in the Pyrenean community of Pujo in 1850, an event described as evidence of ‘profound ignorance’. One particular folklore scholar of the time, Eugène Cordier, commented of the Pyrenean folk that he studied, that he looked forward to the day when, “legends, fictions, and all types of errors will leave the memory of the people, to forever be consigned to the grave domain of history”. To the cultured these stories probably only added to the pastoral charm of the place, to the Bigourdanians they were very real and to be taken seriously. It is against this background that this small isolated town, struggling with the times, would experience, through the action and reaction of two individuals, an upheaval that was to have consequences that at the time would have seemed incredible. The action was that initiated by The Blessed Virgin Mary, as God’s messenger, appearing in Apparition in a riverside cave on the outskirts of the town; the reaction was that of an uneducated teenage peasant girl, Bernadette Soubirous, to whom Our Lady appeared, and on whose slender shoulders lay the responsibility for transmitting this event in a credible and consistent manner.

BERNADETTE SOUBIROUS Marie-Bernarde Soubirous was born in Lourdes on 7th January 1844. She was the first-born of parents, François and Louise. She was baptised two days later, soon acquiring the familiar name of Bernadette. At the time family circumstances were auspicious. Her parents were the de facto inheritors of her maternal grandparents’ flour mill, Boly Mill, a successful and prosperous business. As the only child amongst adults she was loved and no doubt spoiled by the extended family that lived there, but unusually, whilst still a baby, she was put out to a wet nurse following an accident which prevented her mother being able to continue breast feeding. It was not until she was two that she returned home again to be greeted by her new baby sister, Marie-Antoinette (familiarly known as Toinette). By this time the extended family living at Boly Mill was in argument and disarray and in the process of going their separate ways, leaving, in 1848, Bernadette’s parents with the prospect of running the mill without the advice, skilled help and motivation previously given by the close family. Family difficulties Bernadette’s father, François, is described as being a peaceful and humble man, a good and reliable worker

under an employer’s supervision, but with little business acumen. These traits soon took their toll, and the business failed, ironically through their over-generosity, of which advantage was soon taken, and eventually lack of money to buy new machinery necessary to keep the business competitive. The Soubirous family were forced to move from the mill in 1854, under the cloud of debt and scorn. By this time their own family had grown, and of the nine children that the Soubirous were eventually to have, six had been born, of which the survivors were Bernadette, Toinette, their brother Jean-Marie, aged four, and a new born baby, Justin. In a series of moves from one wretched lodging to another, and another failed business venture, the Soubirous finally ended up in the famine year of 1857 in the now celebrated cachot, the former prison cell, judged to be too unhygienic - even by nineteenth century standards - to be used for this purpose, and being underneath the house of one of Louise’s cousins. In this stinking, cramped, vermin ridden cell, overlooking a cess pit and barely twelve feet by fourteen, the family of six took up residence with their meagre possessions, and continued the grim, unremitting grind for survival. Despite these privations the family were generally remembered as being loving and affectionate, and Louise was described by one of her relatives as being, “a good Christian, kind natured and hard working. She brought up

Lourdes - A Place of Healing and Hope