The Litany of Loreto 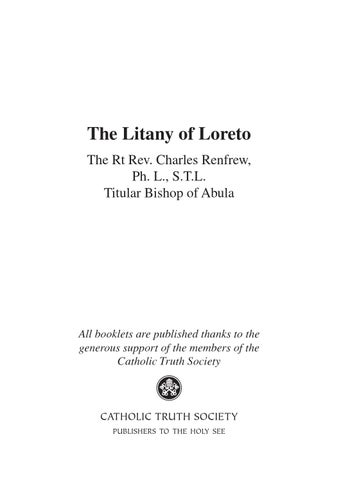 Bishop Renfrew writes as follows: When I started to work on Litany of Loreto I didnâ&amp;#x20AC;&amp;#x2122;t know how much praying and reading and research would be involved. As time went on, I began to enjoy more and more dipping into the theology of Mary, the Mother of God, and trying to translate this Mariology into reasonably understandable and devotional terms for the reader not only to learn from, but to enjoy a little too. Above all, the writing has involved me, as I hope its reading will involve you, in a deeper appreciation of and love for Our Lady - and should it achieve this in even one reader, it will have been worth the whole task. Indeed, I may say, it has already been worthwhile for what it has achieved in me. So, get out that prayer book at the Litany of Loreto and read it, pray it, with each invocation. Take out the hymnal too and re-read those lovely hymns to Our Lady which you have probably sung out in church without really plumbing the depths of their meaning. Take the rosary from your mantelpiece (or, better, your pocket) and ply the beads in honour of Jesus and Mary. And the blessing of the Son of the Mother will certainly be on you! â&amp;#x153; Charles Renfrew Glasgow Feast of Our Lady of Lourdes, 1985

Preface I suppose there are as many forms of prayer as there are people. We all have our own way of talking to God. Some are gifted with a certain ease in contemplation - sitting quietly in the presence of God and letting him act on us, with very few words. Indeed, this openness to God’s action upon us is something worth practising and striving for. Others find this more difficult, but stick to simple forms of vocal prayer learned when they were young. Indeed, St Thérèse of Lisieux always maintained that she could never get beyond the words ‘Our Father’ in the Lord’s Prayer, so full did her mind become at the very word ‘Father’. Other people need pit-props in prayer - the Rosary, prayer books, the Thirty Days’ prayer - and have their special ‘favourites’ amongst the prayers of the great saints. The important thing is to pray - to get into contact, and raise your mind and heart to God frequently, wherever you may find yourself: it is a question of giving time to God instead of to other things. St Benedict’s ‘To work is to pray’ must be interpreted correctly - he did not mean that work was a substitute for prayer, but that it is possible to raise your mind and thoughts to God even during work. His adage must not be used as an escape from contact with God, even during work.

Maybe a new definition of prayer (another to add to the thousands!) would be simply ‘to live constantly in the presence of God.’ Never, but never, say ‘I’m not very good at prayer’. If you do, my answer would be ‘Then become good at it’, for it takes the grace of God and practice of years to be constantly aware of the presence of God all around you in everything and everyone. Besides, you must not look always for consolation in prayer: sometimes it is the constant doing down of distractions which makes for the best effort, and it is effort which the Lord looks for, and not merely results. Surely one of the finest prayers of Our Lord himself was his agonising prayer in Gethsemane. And the answer to that particular prayer was a clear ‘No’ from the Father. Nor must prayer be looked upon as a mere asking, pestering of God for favours. Prayer, like the Mass itself, can be the sheer adoration of God, thanking him for his innumerable benefits, confessing our own sins and unworthiness; I would say that these aims in prayer are the proper priorities, way ahead of asking for favours: if your prayer has become sheer adoration, there will never be a need for any other sort! Mary, God’s mother and mine, help me explore the treasures of this ancient prayer in your honour. Amen.

Mirror of justice, Seat of wisdom, Cause of our joy, Spiritual vessel, Vessel of honour, Singular vessel of devotion, Mystical rose, Tower of David, Tower of ivory, House of gold, Ark of the covenant, Gate of heaven, Morning Star, Health of the sick, Refuge of sinners, Comfort of the afflicted, Help of Christians,

Grant, Lord God, that we, your servants, may rejoice in unfailing health of mind and body, and, through the glorious intercession of Blessed Mary ever-Virgin, may we be set free from present sorrow and come to enjoy eternal happiness. Through Christ our Lord.

Looking at the Litany as a Whole Antiphonal prayer is a very old type of prayer from the earliest days of Jewish worship. I suppose we best know it officially from the Responsorial Psalm - the reader or cantor reads or sings the psalm, and the congregation replies with the repetitive antiphon - with the same words and tune throughout. The same applies to a litany - the invocation is called out and the whole body of people reply with a simple, ‘Have mercy on us’, or ‘Pray for us’. There are some very beautiful old litanies in the Church’s treasury - the Litany of the Saints, the Litany of the Holy Name, The Litany of St Joseph, the Litany of the Precious Blood, the Litany of the Sacred Heart, etc. In the Litany of Loreto, Our Lady’s help is called for under no less than forty-nine titles, each expressive of one or other of Our Lady’s virtues. The first twenty titles indicate the dignity of the relationship between Mary and God and man. They show her excellence as the prototype, after her Son, of Christian perfection. Then follow seventeen titles, many associated with the Old Testament prophecies of her power and office.

Finally, she is addressed twelve times as Queen - in terms which express the broad terms of her queenship. The litany ends with the prayer from the common Mass of Our Lady, seeking health of mind and body, and deliverance from present sorrow to future joy. Before embarking on an individual analysis of the various titles - which will give us a deep insight into the virtue of Our Mother - could I ask you to have a copy near you and look at its broad outlines and divisions? This will give you a better idea, for a start, of the riches of the prayer which maybe you have said or answered in a merely routine fashion. Indeed, to avoid this routineness, which is a danger in all well-known prayers, I think you have to study the prayer as a whole, and say it, above all, slowly: otherwise, its depths escape you, and you are faced with another precious gem before understanding the previous one. Machine guns of praise Look upon litanies as machine guns of praise, title following title, plea for mercy following plea for mercy. For do we not need the intercession and care of our Mother and of all the court of heaven to aid us through our particular Valley of Tears? We know from having used other prayers to Our Lady that she is clement, loving and sweet. We know that never was it known that anyone who fled to her protection was left unaided. We are sinful and

sorrowful, standing humbly before her, but she, the Mother of the Word Incarnate, will not despise our petitions, but in her mercy will hear and answer our every prayer. For she is our Mother, and we her humble and weak children. Indeed, maybe the magic word ‘Mother’ is the key to it all, and the root of our devotion to her and our claim on her ‘now and at the hour of our death.’ Why Loreto? This litany in honour of Our Lady is called after the shrine, the Holy House of Loreto, where it was used among pilgrims from the mid-sixteenth century. The litany did not originate at Loreto, but is traceable to the early Middle Ages: it is greatly influenced by titles of Our Lady used in the Eastern Church. Indeed, the litany’s earliest manuscript dates as far back as 1200. But its popularity spread through thousands hearing it at Loreto and taking it to various lands on their return home from pilgrimage. In 1558 it was published as ‘The Litany of Loreto’ by St Peter Canisius at Diligen in Germany - and his is the oldest-known printed copy of it. Despite efforts to change its texts, Sixtus V granted his approval to the original form and recommended preachers to propagate its use. In time, new titles were introduced. Pius VI added ‘Queen of all Saints’ on his return to Rome after his long captivity; Leo XIII added the titles ‘Queen of the Most Holy Rosary’, ‘Queen conceived

without Original Sin’ and ‘Mother of Good Counsel’; Benedict XV during World War I added ‘Queen of Peace’; Pius XII on the occasion of the definition of the dogma of the Assumption added ‘Queen Assumed into Heaven’.

The Litany of Loreto

This litany to the Blessed Virgin Mary was first used in the mid-16th century at the Italian shrine from which its name derives. Now considered a classic text of Marian devotion, the Litany of Loreto is an opportunity to draw closer to Jesus' mother through seeing her as the greatest example of the Christian life. This booklet, as well as containing the full text of the actual litany, also looks closely at the many titles used to describe Our Blessed Lady and how their meaning can help us to live as she did, ever open to God's plan.