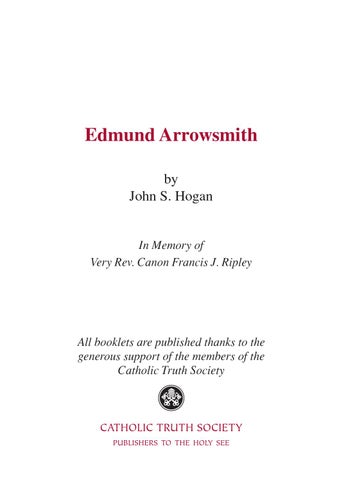 Introduction The children stand shivering in the cold. It was well into the night when they were awoken by the banging on the door. Thrown out of bed, now they huddle together disorientated, tied two by two; they watch as their home is ransacked. The priest-hunters tear through the house; swords are applied to every nook and corner, cupboards cleared, walls pounded to see if priest holes have been constructed in the fabric of the building. As usual, they find nothing. No doubt later, as they are cleaning up, certain items will be missing; perhaps they appealed to the searchers and were secreted away or just ‘confiscated’. Leaving as suddenly as they came, they take mother and father with them: the children are left standing outside dressed only in their nightclothes. It was not the first time, nor, probably, the last. The eldest, Brian, takes charge of his siblings and leads them to a neighbour’s house where he knows they will find refuge, warmth, and a little comfort after the ordeal. Their parents will be back in the morning after they have paid the fine to regain their liberty, and the priest-hunters’ wages - they have to be compensated for their night’s work and it is the victims who have to pay them. Life will resume its normal course, until another knock is heard in the middle of the night.

Such was the childhood experience of the Arrowsmith children, and indeed many Catholic children in the years following the establishment of a new church in England. The post-Reformation years were difficult for adherents of the ‘Old Faith’. Refusing to embrace the King’s religion and the Queen’s ‘settlement’ they held on, paying fines for non-attendance at state church services, gathering in secret for Mass, hiding priests, adapting to ever greater poverty. Recusants and Catholicism in Lancashire In the north of England there were more recusants than down south. Though monarchs and their servants did everything they could to make them conform, Northerners remained faithful: they were strong willed and clever. By the time young Brian Arrowsmith and his siblings joined the ranks of the persecuted, the Catholics of the north knew better than to trust a monarch. In the years following the religious revolution they had launched what could have been a successful coup against a reigning monarch. The Pilgrimage of Grace in 1536 and 1537 had been an appeal to Henry VIII to allow them to remain Catholic. The king resorted to treachery to foil them; they were loyal, they believed a king’s promises and they paid the price with their lives. They were still loyal, as they tried to assure Henry’s insecure daughter, Elizabeth; but their first allegiance was to the One who had sovereignty over their souls. Though

a worldly queen should try to claim it, her realm did not extend to their souls or their consciences. Too many had died; there had been too much bloodshed. What was said to be a reformation seemed more like a revolution, one in stages, backwards and forwards, with death being the only constant. Many of those facilitating it were not so much men and women of principle, but of ambition. Henry dismantled the Church and her monasteries to enrich himself; his son Edward, though sickly and dependent, changed the face of English Christianity. Mary, his Catholic daughter, tried to turn the clock back, but time and that fierce Tudor streak hobbled her efforts which disintegrated when her sister, Elizabeth, succeeded her. Elizabeth’s settlement Elizabeth imposed a settlement, a half-way house, she claimed, between her sister’s orthodox Catholicism and her brother’s Protestantism. In reality she had more of her father in her and the new established church was centred on her rather than being an accommodation between Catholics and Calvinists. She sought to enforce this settlement by means of law, and throughout her reign various acts were passed to gradually squeeze out Catholicism. She interpreted adherence to the ‘Old Faith’, as Catholicism was called, as an action depriving her of allegiance that was her due as sovereign. Those priests and laity condemned for their fidelity to Catholicism were arraigned for their

presumed attack on the queen’s sovereignty in her own realm. At the beginning of her reign she said: “I have no desire to make windows into men’s souls” meaning she had no interest in looking into anyone’s conscience, she only asked that her subjects respect her and be loyal. In reality, however, she did seek to look into the souls, hearts and minds of her subjects and demanded that their first allegiance, including their spiritual fealty, be to her. In her first year she repealed all of Mary’s legislative acts, re-enacting those of her father and brother, coupled with a new Act of Supremacy with oath attached. Another act outlawed the Roman Missal and established Archbishop Cranmer’s Book of Common Prayer as the only liturgical text to be used in church. For the next forty years more acts were passed to ensure Elizabeth’s subjects attended Anglican services. Priests were banned from the realm: it was not only high treason for a priest to be in England, it was treasonous for an Englishman, a subject of the queen, to be ordained. Other acts made it treasonous for a Jesuit to be in England, to bring Papal Bulls into the country, to print books that were critical of the queen, and, in an act of 1581, to convert to Catholicism. Those who fell foul of the new laws were fined, hanged, or subject to the most cruel method of execution of all: hanging, drawing and quartering. These laws remained throughout the reigns of her successors the Stuart kings James I and Charles I. Under Charles they were for the most part ignored.

A noble, if weak, king, Charles abhorred the idea of killing his subjects on account of their religion. As his power waned, so too the toleration he hoped to instil. The story of Edmund This was the world in which St Edmund Arrowsmith lived, the little Brian of the story. To understand him and his ministry we must understand the times and their effect on him. As he stood as a little boy huddled with his shivering siblings, drawing them in to himself, the priest was born. In his short life and ministry he sought to give shelter to a suffering people, to surround them in his priestly embrace. He risked his life to console, to comfort, to teach and bring to Christ a people who endured great hardship and were prepared to endure much worse for the sake of their faith. Edmund did not surrender to hatred. He was a man of principle, often of few words; those words he did utter were wise, strong and true, emerging from a heart that was not only convinced of the truth of the Catholic faith, but one which was united with the founder of that faith, Jesus Christ. As Christ was his refuge in trial and sorrows, he sought to bring his people to that same refuge so they too would find the strength they needed to remain true. One of Edmund’s first biographers, his Jesuit confère, Fr Cornelius Murphy, SJ, writes, “We have little left concerning Father Arrowsmith, after what inquiry could be made, besides what relates to his happy suffering

for the Faith”: much of the martyr’s life is shrouded in mystery; he was a man who lived in the shadows by necessity. There are some original sources which are the basis of this brief biography, the most important being a contemporary account published in 1630, two years after his martyrdom, its writer unknown. This account was redacted and supplemented by Murphy and published in 1737. Other sources include Bishop Richard Challoner’s Memoirs of Missionary Priests (1874); Br Henry Foley’s Records of the English Province of the Society of Jesus (1875) and Dom Bede Camm’s Forgotten Shrines (1910). Among general histories of the era, Fr John Gerard’s Autobiography of an Elizabethan offers a first-hand account of the life of a missionary priest in penal England, a valuable resource which allows us a glimpse of what Edmund’s life must have been like. Heroic priesthood Edmund worked in the shadows, in silence, hidden away with his people, serving them and loving them with a fatherly heart. He was English to the core, a proud son of the north; he loved his country and prayed for it just before he died, forgiving those who had brought him to the scaffold. Like St Thomas More, however, his love for his country and its queen could not supersede his love for Christ and the loyalty he knew was required of a son of the Church. He lived in the midst of the truth and he could not

deny it; he could see that a true settlement could only be found in embracing the truth and living the life of Christian discipleship - in rendering to Christ our total allegiance. In the eyes of many this made him a traitor, a difficult subject; in the view of others he was a patriot, a man of principle, a martyr. This latter view has been confirmed by God with his glorification, and in the times we live in Edmundâ&#x20AC;&#x2122;s life and example is more relevant than ever. Godâ&#x20AC;&#x2122;s raising of his servant to the altars places before the whole Church a model of faithful discipleship in the midst of trial, of heroic priesthood and joyful living of the consecrated life in an age that did not understand it.