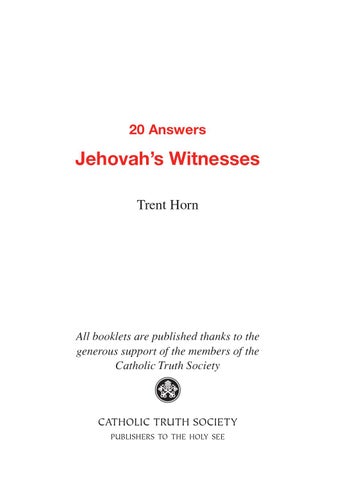 Introduction The doorbell rings, and you peer through the peephole. Standing on your doorstep is a man in a suit and a woman in a tasteful dress. They don’t look like your average salespeople, so you open the door. It turns out they are here today to see if you “hope for a better world” or if you “wonder if the Bible is still relevant.” They want you to have some free magazines and are willing to study the Bible with you at your convenience. It turns out that the guests on your doorstep are Jehovah’s Witnesses, a religious group founded in the 1870s that has nearly eight million members worldwide. Jehovah’s Witnesses differ from Catholics or Evangelical Christians because they reject certain fundamental Christian teachings. In one of its magazine articles, the group distinguishes itself from Protestantism: Protestant faiths reject certain features of Catholic worship, Reformation leaders retained certain Catholic dogmas, such as belief in the Trinity, hellfire, and the immortality of the human soul. Jehovah’s Witnesses, however, believe that those doctrines not only contradict the Bible but also promote a distorted view of God.1

distribute magazine articles that say things like, “What must we do to avoid false teachers? We do not speak to them or invite them into our houses. We also do not read their books, watch them on television, read what they write on the Internet.”2 But the Watchtower Bible and Tract Society also encourages non-Jehovah’s Witnesses like me to give you a fair hearing and to not simply dismiss the Watchtower as being a “false prophet.” If you expect other people to be willing to change their minds about Jehovah’s Witnesses, then shouldn’t you be willing to do the same? 1. What is the history of the Jehovah’s Witnesses? Jehovah’s Witnesses emerged in the north-eastern United States during the 1870s, though at the time they were known as “Bible Students”. Under the direction of founder Charles Taze Russell, the Bible Students believed they had restored the true doctrines of the Christian faith that were lost after the death of the apostles. In 1881, Russell founded a printing company that was moved to Brooklyn, New York, where it became known as The Watchtower Bible and Tract Society. The corporation still exists there and serves as the legal and ecclesial authority for the Jehovah’s Witnesses.3 Russell used the press to spread the message that the world would come to an end in 1914.4 When it didn’t, Russell claimed that he had miscalculated and that the world would end in 1915.5

After Russell died in 1916, Joseph Franklin Rutherford succeeded him as the president of the Watchtower Bible and Tract Society. In a book he published through the Watchtower called Millions Now Living Will Never Die, Rutherford claimed that many who were alive in 1914 would live to see the end of the world - which would now take place in 1925. Rutherford also predicted that the patriarchs Abraham, Isaac, and Jacob would be resurrected, and God would transform Earth into a paradise for the patriarchs as well as for the majority of believers.6 In order to accommodate the resurrected patriarchs, Rutherford had the Watchtower Society construct a mansion in San Diego, California, that was later called Beth Sarim, or “House of the Princes”.7 Even though the mansion was built four years after the failed 1925 prediction, Rutherford still preached the imminent end of the world and served as Beth Sarim’s caretaker during the Great Depression.8 In 1931, Rutherford changed the group’s name to Jehovah’s Witnesses in order to distinguish it from other competing “Bible Student” sects, many of which still exist.9 He also taught that God was the ultimate leader of the Jehovah’s Witnesses, and the Watchtower Bible and Tract Society served as his official “administrator”.10 Rutherford died at Beth Sarim in 1942 and was succeeded by the Watchtower Society’s third president, Nathan Knorr. Knorr was instrumental in creating programmes that trained Jehovah’s Witnesses to deliver testimonies door-

to-door. He also commissioned the publishing of a new translation of the Bible called the New World Translation (NWT). The NWT was published as a single volume in 1961, and the Watchtower claims this translation “offer[s] no paraphrase of the Scriptures. Our endeavour all through has been to give as literal a translation as possible.”11 However, several Greek scholars have criticised the NWT for translating certain passages in ways that sacrifice accuracy in order to promote Jehovah’s Witness theology (see questions 8 and 14). Beginning in the mid-1960s, the group’s literature hinted strongly that the end of the world would come in 1975.12 In 1969, the group’s Awake! magazine said, “If you are a young person, you also need to face the fact that you will never grow old in this present system of things. Why not? Because all the evidence in fulfilment of Bible prophecy indicates that this corrupt system is due to end in a few years.”13 Despite this failed prediction, Awake! continued through the 1980s to print at the top of the magazine’s first page the following text: “[T]his magazine builds confidence in the Creator’s promise of a peaceful and secure world before the generation that saw the events of 1914 passes away.” The “events of 1914” refer to Jesus’s invisible return, which the Watchtower claims was prophesied to happen 2,520 years after the fall of Jerusalem in 607 BC, which would be AD 1914 (even though this contradicts mainstream historians, who agree

Jerusalem fell in 587 BC).14 Since there are only a handful of people alive today who were alive in 1914, it seems all but certain that this prophecy too will be invalidated. Perhaps that is why in 1995, after carrying the banner in the magazine for thirteen years, the reference to the generation of 1914 was replaced with dateless prediction of a world “that is about to replace the present wicked, lawless system of things.” In response to these failed predictions, Jehovah’s Witnesses claim that the Watchtower is not infallible and admit on their official website, “[W]e have had some wrong expectations about the end. But we are more concerned with obeying Jesus and saving lives than with avoiding criticism.”15 While it is noble to be ready for Jesus’s return, these failed predictions call into question the truth of the Watchtower’s claim to be “Jehovah’s channel of communication”16 (see question 19). Despite these setbacks, membership in the group has climbed steadily over the years, and today there are approximately eight million Jehovah’s Witnesses worldwide.17 What’s remarkable about this growth is that Jehovah’s Witnesses have an incredibly high turnover rate. According to one Time magazine article, “[T]wo-thirds of the people who told [the surveyors] they were raised Jehovah’s Witnesses no longer are - yet the group attracts roughly the same number of converts.”18 The article attributes this steady growth to the group’s zeal for door-to-door evangelism.