24 the problem of evil preview 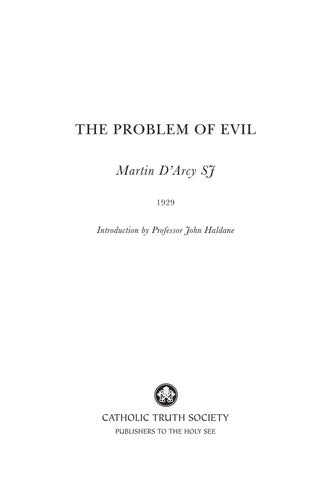 The presence of evil in the world is a fact which has at all times taxed menâ&amp;#x20AC;&amp;#x2122;s mindsâ&amp;#x20AC;Śon this account many have turned away scandalised from God...

FOREWORD Martin D’Arcy was a central figure in the flowering of intellectual Catholicism that occurred in Britain in the 1920’s and 30’s. Born in 1888, the youngest of four brothers, D’Arcy was educated by the Jesuits at Stonyhurst College in Lancashire where he decided to enter the Society of Jesus. His initial training as a Jesuit lasted for six years during which time he showed particular ability in the study of philosophy. On the strength of this he was sent to ‘Pope’s Hall’, the Jesuit house of study in Oxford, to take a degree at the University. After an uncertain start he then excelled, taking a first class degree in 1916 and winning several prestigious University prizes during his undergraduate and graduate career. After periods back teaching at Stonyhurst, and further studies he eventually returned to Oxford in 1927 to the Jesuit house which had in the meantime been renamed Campion Hall. D’Arcy soon acquired a reputation for brilliance as a presenter and defender of Catholic ideas, and he

received many converts from the University into the Catholic Church, including Evelyn Waugh. In 1933 D’Arcy became Master of Campion and commissioned the great English architect Edwin Lutyens to design a new building for the Hall which was completed in 1935. This achieved D’Arcy gathered a fine collection of religious art, entertained figures from within and beyond the University, and wrote and broadcast; establishing himself, the Hall, and the Oxford and London Jesuits as major contributors to the intellectual distinction of Catholicism in Britain. His many books include: The Nature of Belief (1931), The Pain of this World and the Providence of God (1929), The Mind and Heart of Love (1945), No Absent God (1962), and Of God and Man (1964). Martin D’Arcy died in 1976. A collection of his reminiscences was published posthumously as Laughter and the Love of Friends, and a biography by H.J.A. Swire, entitled Fr Martin D’Arcy: Philosopher of Christian Love was published in 1997. The present essay on The Problem of Evil was first published by the Catholic Truth Society in 1929, around the same time as he produced The Pain of the World and the Providence of God. Both writings address the question of how the facts of suffering and sin can be reconciled with the existence of 6

an all powerful, all knowing, and all loving God. For the most part D’Arcy’s treatment of the issue conforms to familiar resolutions of the apparent tension between the badness found in the world and the infinite goodness of its creator. There are, however, points at which his account introduces ideas that are now overlooked. These are important but they also challenge sentimental attitudes, and as our culture has grown ever more sentimental in the seventy years since D’Arcy first wrote about the problem of evil, readers may find some of what he has to say quite arresting. A more immediate contrast to present day discussions, however, concerns not what he says but how he says it. D’Arcy writes in a somewhat rhetorical and elaborate manner, often in the course of a sentence re-expressing the same idea, adding another related one or ornamenting the point. This is in part a feature of the period but D’Arcy also aspired to a distinctive, high literary style. By today’s standards this can be seem overcrafted but it is worth remembering that he was writing in something of a golden age of literary journalism and commentary. This was the period of G.K. Chesterton, G.B. Shaw and H.G. Wells and no doubt M.C. D’Arcy sought to match those standards. At one point he actually quotes

Chesterton, though not by name, writing “we are attempting, as a well known writer has said, to get heaven into our heads instead of our heads into heaven”. D’Arcy’s own style is less that of the artist and more that of the philosopher, but as befits the subject of the essay the things to look for are not the images but the ideas. In brief D’Arcy argues that the problem of evil is not that of whether the fact of evil is incompatible with the existence of God. If there were no God there would be no problem. Evil would still need to be addressed but without the hope of a Divine resolution. D’Arcy here assumes the results of the traditional arguments for the existence of God, and therefore takes the problem to be that of saying why a good God might create and sustain a world in which evil arises. His first point by way of response is that evil may be either natural or moral: harm suffered or evil done. His second is that evil is not a something, a substantial reality, but an absence or privation. Blindness is the lack of sight; cruelty the lack of proper motive, and so on. All that is, has goodness to some degree; but as he writes “evil comes in when something is not, or ceases to be what it ought to be”. Why, then, does God permit such privations? D’Arcy warns us against expecting 8

complete or detailed answers but he points us in several important directions. He proceeds through three stages: first, freeing God of any suspicions of injustice; second, finding positive reason why God should have permitted evil; and third, relating the existence of the world to Divine Love. To get the best from his essay one should read it through once fairly quickly, not trying to get clear about each and every point but aiming to catch its general drift. Then one should read it again slowly, marking points for further reflection. In that way it will serve not only as a piece of religious instruction but as a focus for religious meditation. Such is its interest and enduring value. Professor John Haldane University of St Andrews

INTRODUCTION The presence of evil in this world is a fact which has at all times taxed menâ&amp;#x20AC;&amp;#x2122;s minds; so much so, indeed, that on this account many have turned away scandalised from God, or found it an inseparable obstacle to belief in His existence. Even Catholics at times seem to feel it as a shadow on Godâ&amp;#x20AC;&amp;#x2122;s goodness, a skeleton, as it were, in the cupboard; with the result that the suppressed doubts and uncertainty which accompany such an unrationalised fear produce a kind of creeping paralysis of faith. To escape such doubts a clear understanding of the force of the difficulty is required, and the first step to such an understanding lies in a correct statement of the problem. Half the difficulty, indeed, is caused by vague or incorrect statements which do not admit of an answer or confuse several quite distinct questions, or leave the mind a prey to uncertainty. The simple and correct statement of the question at stake, then, is: Why does God permit suffering, mental and physical, and the moral evil of sin in this world which He has created and governs?

As seen from this statement, there are two kinds of evil, pain, whether physical or mental, and sin. God permits both: He does not cause them directly: never, certainly, sin - and as a rule not even pain. There is no reason why He should not cause pain for a good purpose - and obviously God will always have the best of purposes - but usually the pain we see around us comes from causes other than God, from natural secondary causes and the will of man. It will be noticed that the problem presupposes the existence of God - and rightly so. There is no problem if there is no God; and evil has nothing to do with the question of Godâ&amp;#x20AC;&amp;#x2122;s existence; as well might we oppose the fact of free will to the equally certain fact of Godâ&amp;#x20AC;&amp;#x2122;s Omnipotent Will. It is thoroughly misleading, therefore, to state the problem as if it were a choice between two dubious assertions or facts, God exists, evil exists, one of which must be false if the other is true. Yet this is so common a delusion that the falsity of any dilemma must always be carefully pointed out. It is responsible for much of the distress of mind aroused by the Problem and it is responsible for many false theories. For not unnaturally we find, given this false start, that some have rejected God and joined the Atheist or Pessimist fraternity; or else they have tried a compromise by thinning 12

down the notion of God to that of a Finite Person, superior indeed to man but subject to some higher power. In this latter hypothesis room is left for much variety of opinion as to the precise nature both of the Finite god and of the mysterious power behind him. One view sets good and evil over against each other as active principles constantly at war, with the universe as their battling ground. Another against all evidence would spirit away evil as an illusion, or, less extravagantly, declare without qualification that this is the best of all possible worlds. Akin to this latter view are Idealists and Pantheists, who are forced to make evil a mere appearance or necessary factor in Godâ&amp;#x20AC;&amp;#x2122;s expression of Himself, a discord, ugly by itself, but contributing beauty to the theme as a whole.

24 the problem of evil preview