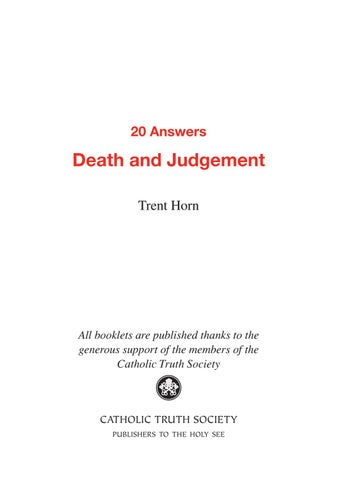 Introduction Eschatology is a branch of theology that studies the â&amp;#x20AC;&amp;#x153;Last Thingsâ&amp;#x20AC;?, of which there are roughly two kinds. The first are the four traditional Last Things every individual must face - death, judgement, hell, and heaven. Every person will face the first two, but their choices in this life will decide which of the last two they will participate in for all eternity. Eschatology sheds light on what these things are and how we can prepare for their inevitable appearance in our own lives. The other Last Things are the events that will take place at the end of the world - especially the resurrection of the dead and the final judgement of mankind. Almost every world religion, and even secular fields of study like physics and cosmology, teaches a particular eschatology, or set of beliefs about the end of the world. Many religious sects, including some Christian groups, imagine dramatic end times scenarios filled with fire and mayhem. However, Catholic eschatology is not focused exclusively on the how, but the who. The end of the world finds its meaning in the return of the person who saved it - Jesus Christ. Itâ&amp;#x20AC;&amp;#x2122;s fitting that the liturgical season that begins with readings about the end of the world is the season of Advent.

Although most people identify Advent with Christmas, the Church understands that our recollection of the first coming of Christ helps us prepare for Christâ&amp;#x20AC;&amp;#x2122;s eventual Second Coming at the end of the world. Even if Christ does not come in our lifetimes, we will eventually meet him at the end of our earthly lives. This makes it all the more necessary to correct misunderstandings people have about the Last Things and better prepare them to face these inevitable ends. 1. What is death? All physical objects are composed of matter, but there is an observable difference between living and nonliving matter. Living matter is able to grow and adapt over time, sense the material world (in the case of animals), and even think rationally about it (in the case of humans). This is amazing given that in humans, for example, ninety-nine percent of our bodies are composed of only six nonliving elements: hydrogen, carbon, oxygen, nitrogen, calcium, and phosphorus.1 Since living and nonliving things are composed of roughly the same elements, the difference between them cannot be purely physical. Instead, the difference between living and nonliving matter is found in the presence of the soul, which St Thomas Aquinas called â&amp;#x20AC;&amp;#x153;the first principle of life.â&amp;#x20AC;?2 All living things exist as a composite of soul and body. The soul is the organising principle of life that animates

the body and makes it living instead of dead. A cloud might dissipate but it doesn’t die, because clouds (and other nonliving objects, like rocks) lack souls. Unlike living things, they lack a principle that unifies their parts for the good of the whole. They might dissolve or decay, but they can’t die. However, when the soul is absent from a living body, that body’s parts stop co-ordinating together for the good of the whole. As a result, the living thing, be it a plant, animal, or human, breaks down or “de-composes” into its original parts. This is why death can be broadly defined as the reduction of a living thing to its component parts. Some people mistakenly think that only human beings have souls, but all living things have souls. However, unlike humans, the souls of other living things are just as material and just as mortal as the parts they animate. When a plant or animal ceases to exist, the soul that animated this being ceases to exist as well.3 But human souls are different because they are immaterial, and so they continue to exist after death and cannot be destroyed (see answer 2). When it comes to humans, the Catechism of the Catholic Church tells us that “In death, the separation of the soul from the body, the human body decays and the soul goes to meet God, while awaiting its reunion with its glorified body” (CCC 997). Unlike angels, who exist as pure spirits without bodies (CCC 330), humans exist as embodied beings who possess immortal souls. When humans die,

they don’t become angels. Instead, their disembodied souls continue to exist and await reunification with their bodies. The Catechism tells us: “Even though man’s nature is mortal God had destined him not to die. Death was therefore contrary to the plans of God the Creator and entered the world as a consequence of sin” (CCC 1008). When our first parents sinned in the Garden of Eden, they shattered the peaceful harmony and original justice God created. Their disobedience resulted in forsaking the grace God gave them, which would have protected them from suffering and death (CCC 400). They not only lost these graces for themselves, but also became unable to pass them to their descendants, who in turn could not pass them on to us. This is why Romans 5:12 says, “Therefore as sin came into the world through one man and death through sin, and so death spread to all men because all men sinned.” The Catechism calls this original sin, or “the transmission of a human nature deprived of original holiness and justice” (CCC 404).4 Original sin is not a fault or crime we committed, because babies have original sin even though they have done nothing wrong (Rm 9:11). Instead, original sin is an absence of God’s grace, which all humans inherited through our fallen nature. Let me repeat, God did not create human death nor did he intend for us to die. This came about because, of the free choices of our first parents. Fortunately for us, Christ’s freely chosen death on the cross redeemed or bought humanity

back from being under the power of death. We now have the opportunity to be partakers in the divine nature (2 Pt 1:4), and death has lost its sting (1 Co 15:55). God hasn’t changed our fallen, human nature (we still die physical deaths), but he has given us the opportunity to rise from the dead and attain glorious, everlasting life with him. According to the Catechism, Because of Christ, Christian death has a positive meaning...In death, God calls man to himself. Therefore the Christian can experience a desire for death like St Paul’s: “My desire is to depart and be with Christ.” He can transform his own death into an act of obedience and love towards the Father, after the example of Christ (CCC 1010-11). 2. How do we know there is an afterlife? One alternative to the Christian view of death is the atheistic or materialistic view of death. According to this view, just as the information on a computer ceases to exist when the computer is destroyed (provided the information hasn’t been backed up anywhere else), the information in our brains that makes us “us” ceases to exist when our brains die. Since humans lack the ability to back up their mental experiences, it follows that once the body dies, or even if just a vital part of the brain dies, the person as a whole forever ceases to exist.5

But there are several aspects of the human experience that contradict this materialistic view of man and its subsequent denial of the afterlife. First, if humans have free will and can choose to be moral or immoral, then a person’s actions can’t merely be the result of chemical reactions in his brain. If they were, then no one could freely choose a course of action any more than a rock at the mercy of gravity and friction can choose which way to roll down a hill. Just as we don’t hold landslides or tigers morally responsible for the harm they cause, equally, physical humans would also lack moral responsibility. But humans are morally responsible for their actions (or, we rightly say that human acts can be good or evil), which means human actions are not purely the result of physical processes. However, a critic could say that moral reasoning and other distinctly human behaviours like rational thought emerge from the right mixture of physical molecules, just as the Mona Lisa emerges from the right mixture of paint colours. Tigers and lightning don’t have this mixture, but humans do, which is why humans have distinct features like consciousness, the capacity for abstract thought, and moral awareness. An immaterial “soul” then becomes unnecessary to explain these uniquely human behaviours. The problem with this argument is that uniquely human behaviours aren’t only unexplained from a materialist perspective, they are inexplicable from that viewpoint,

as no physical explanation can ever account for these behaviours. Consider, for example, the difference between an image and a concept. A dog may see a cat, but he never sees the concept “cat,” and so he doesn’t understand it. Likewise, primates may see an object as a useful tool, but they can’t apprehend the concept “tool,” and so they don’t produce tools for others to use. Tools only exist as these creatures discover them and not as ideas in the mind that can be fashioned out of what exists.6 Humans, on the other hand, can both know abstract concepts and communicate them to others through language. This is important because abstract concepts only exist in an immaterial way. They are real, but they cannot be discovered through sensory or other material means. Humans must, therefore, possess an immaterial, way of coming to know these real entities - what we call an immaterial soul. Because the soul is immaterial it has no parts, and if death involves the reduction of a thing to its component parts, then this means that the soul cannot die and so survives the death of the body. Even atheistic philosophers understand the problem inherent in a physical brain thinking about things that lie beyond the brain’s immediate interactions. For example, if our brains were just lumps of matter, then how could anything about frozen Antarctica be inside my brain cells, which have never been there? When my brain is thinking about Antarctica, I can examine it with all kinds of instruments,

but nothing from the frozen continent will be visible. The atheistic philosopher Alex Rosenberg wrote: Consciousness is just another physical process. So, it has as much trouble producing aboutness as any other physical process...it’s got to be an illusion, since nothing physical can be about anything...the clumps of matter that constitute your conscious thoughts can’t be about stuff either.7 As a result, Rosenberg rejects the idea that our “selves” really exist and argues that our consciousness, or internal mental life, is just an illusion. But if our self really is “real”, then we have good evidence that our mind is not the same thing as our physical brain. We can know that an immaterial principle of being, or the soul, organises our physical body and gives rise to our rational abilities.8 Finally, we have evidence that death is not the end of our existence because someone has come back from the dead to testify that this isn’t the case - Jesus Christ. As St Paul wrote, “If the dead are not raised, then Christ has not been raised. If Christ has not been raised, your faith is futile and you are still in your sins…But in fact Christ has been raised from the dead, the first fruits of those who have fallen asleep” (1 Co 15:16-17, 20).