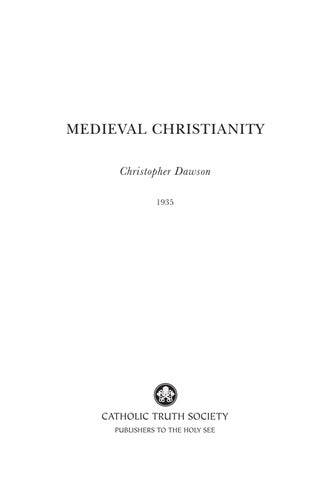 Christopher Dawson (1889-1970), a convert from Anglicanism, was a historian of religion and culture.

It was the most creative age of European historyâ&amp;#x20AC;ŚOut of the chaos of barbarian tribes and the debris of the Roman Empire, it created a Christian people.

The subject of this study is the thousand years of religious development from the fall of the Roman Empire in the west to the Reformation. People often speak and write of mediĂŚval religion and the mediĂŚval Church as though they were simple and uniform phenomena. Actually this is very far from being the case. They do not remember that the distance that separated the end of the Middle Ages from their beginning is twice as long as that which divides the age of Lenin from that of Joan of Arc, or the age of the Maccabees from the age of the Fathers. The 1,000 years in question were a period of intense cultural and spiritual change. They saw the creation of Europe and the birth of modern western civilization. When they began Northern Europe was still pagan and barbarous, and the centre of civilization and of Christianity was in the Eastern Mediterranean and to a large extent outside the frontiers of Europe. When they ended South-

eastern Europe was being overrun by the Turk, and America was being conquered by the Christians. And how much had happened in the meantime! The conversion of the West, the brilliant dawn of Celtic and Anglo-Saxon Christianity, the rise of Islam and the ruin of the great churches of Africa and Egypt and Syria, the conversion of the Germans and the Slavs, and the formation of the Holy Roman Empire, the conflict between the Papacy and the Empire, the Crusades, the formation of the universities and the rise of scholasticism, the great movement of mediæval monasticism—the Cluniacs, the Cistercians, the Franciscans, and the Dominicans— the growth of the national monarchies, the Great Schism and the Conciliar movement, the fall of the Byzantine Empire and the beginnings of the Renaissance. All these movements and events are part of the history of mediæval Christendom, and each affords sufficient material for a book—indeed for a number of books. EAST AND WEST

Here we must limit ourselves to considering briefly some of the main aspects of the religious development of western Christendom. It is, however, important for us to remember that this is 6

only a part of the subject. Mediæval Christianity was not wholly western and not exclusively Catholic. At the same time that England was being converted by the Benedictines and the Irish monks, Nestorian missionaries were carrying Christianity to China; and while Scandinavia was becoming Catholic, Russia was receiving its Christianity from the Byzantine Empire at the very time when it was drifting into permanent schism with the West. There were flourishing Christian cultures in mediæval Armenia and Georgia, and Abyssinia remained a lonely outpost of Monophysite Christianity far away in the East African highlands. The problem of reunion was a vital issue all through the later Middle Ages down to the Council of Florence in 1438-45,1 while the vague consciousness of the lost Nestorian Christianity of Central Asia embodied itself in the legendary figure of Prester John, the priest king of a mysterious realm in the Far East.2 One of the strangest and most romantic episodes in the story of mediæval Christendom is that of the embassy of the Nestorian monk, Rabban Sauma, who travelled from Pekin to Rome at the close of the thirteenth century, and who has left us an eye-witness’s account Cf. Norden Papstum und Byzanz. Probably the Nestorian Uighur Turk kingdom of the Kerait in Central Asia. See The Mongol Mission, ed. Dawson, 1955 (The Makers of Christendom Series). 1 2

of western Christendom as it appeared to a Christian from China.1 Such episodes are rare. During the greater part of the Middle Ages, western Christendom was shut off from the rest of the world by the unbreakable barrier of Islam, and the Mediterranean, the old highway of civilization, was, especially in its western half, closed to Christian shipping. Nevertheless, there was much more intercourse between East and West than we might have expected. The first Archbishop of Canterbury was a Greek from Cilicia. At a later period western scholars, like Adelard of Bath, learnt their science from Jewish and Arabic masters in Spain and in the East, while, still later, the Franciscan missionaries penetrated to China and India, and Greek monks and bishops, like Barlaam of Calabria and the great Bessarion, brought back the knowledge of Greek literature to the Latin world. But above all we must remember that the whole Christian culture of the mediĂŚval world was built upon non-European foundations. The spiritual masters of the Middle Ages were the monks of the Egyptian desert and the African St Augustine; their intellectual teachers were (apart from St Augustine) the Fathers of the Eastern Church, above all the great Cappadocians, Basil, and the two Gregories, 1

and the Syrian, Eusebius, the results of whose labours were communicated to the west through the medium of the writings of Ambrose and Jerome and Rufinus. When the Roman Empire lost the western provinces, the main centres of Christian thought and culture, and the majority of the Christian population were still outside Europe—in North Africa and Egypt, in Syria and Asia Minor, in Mesopotamia and Armenia. At the end of the Middle Ages the geographical situation of Christianity in the old world was much the same as we find it to-day: it had become a European religion with its centre in the West, and had lost its hold on Western Asia and North Africa, where it had formerly been so flourishing. THE MAIN PHASES OF THE MEDIÆVAL CHRISTIAN DEVELOPMENT

The essence of the mediæval development consists in this reception of Christianity by the West, the conversion of the northern peoples and the building of a new Christian culture on the old religious foundations but with new social and racial elements. Thus the history of the Middle Ages falls naturally into two halves—the age of the conversion of the