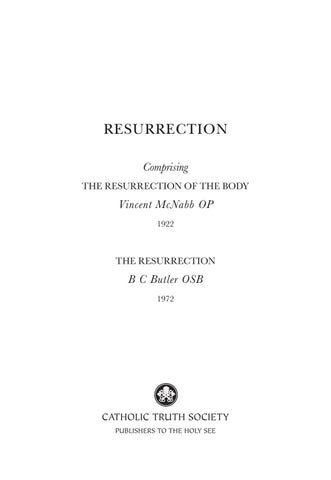 Belief in the resurrection transforms our attitude to life. Our view is no longer limited, by inevitable death, to the horizon of this “valley of tears”.

Vincent McNabb (1868-1943) was a legendary street evangelist and social reformer. Bishop (Basil) Christopher Butler (1902-1986) was a monk of Downside and eminent Scripture scholar.

THE RESURRECTION OF THE BODY Vincent McNabb OP

THE RESURRECTION OF THE BODY* VINCENT McNABB, O.P.

I.—Meaning of the Doctrine This dogmatic decision of the Fourth Lateran Council held in the year 1215 A.D., will serve as the authority *Reprinted from “Blackfriars” (May, June, 1922)

their bodies. To be committed again to a body will not be either a supernatural punishment or a supernatural reward, but will be the supernatural accomplishment of a natural desire and state. 5. Moreover, the body which each human being will possess for ever will be his own body which he now has. It will not be his own merely because after the Resurrection it will belong to him and to no one else; it will not be a body that is given to him; it will be his own present body which will be given back to him. So much is de fide for a Roman Catholic. But it is not yet de fide how much is meant by the phrase “their own proper bodies which they bear.” Catholic theologians here are found to differ. (a) There is a group who hold that the Resurrection of the Body does not mean that the soul will be re-united to any particle of matter which belonged to its former body. The body which the human being will possess will be called “the same body,” because it will be quickened by the same soul. For these theologians, identity of the soul suffices for identity of the body. (b) The larger group of theologians, following St Thomas, declare that mere identity of soul is not sufficient for identity of body. The soul must be reunited to at least some of the matter that once essentially belonged to it. The chief reason for holding this opinion is the phrase of the Creeds άνάστασις (resurrection). If 8

II.—The Witness of the New Testament 6. Having explained the meaning of the Lateran decision, we may now presume to analyse the New Testament basis of the doctrine. (a) We shall not deal with the proofs that may be adduced from the Old Testament. If it is true, as it seems to be true, that the doctrine of the Resurrection of the Body, like the doctrine of the Trinity or the Incarnation, is foreshadowed and foretold rather than revealed in the Old Testament, we may be content to refer to these foreshadowings which were differently interpreted by such loyal groups of Jewish thinkers as the Sadducees and the Pharisees. The Book of Job has summed up these dim shadows in its poignant hope:

I know that my Redeemer liveth And in the last day I shall rise out of the earth And I shall be clothed again with my skin, And in my flesh I shall see my God. (Job xix. 25. 26). 9

THE RESURRECTION B C Butler OSB

THE RESURRECTION Bishop B C Butler

The heart of the Gospel The emphatic and joyful assertion that Jesus Christ has risen from the dead is at the heart, indeed at the origin, of the good news (‘gospel’) entrusted to the Church and proclaimed by its spokesmen. The whole of the New Testament may be said to depend upon this affirmation, and we know of no stage in the public life of the Church, from the first Pentecost onwards, which did not rest upon this explicit affirmation. The Acts of the Apostles says that the explanation given by St Peter of the phenomena of that great day was that (1) they were a fulfilment of the Old Testament prediction that ‘in the last days’ God would ‘pour out his Spirit upon all flesh’; (2) God has raised up Jesus of Nazareth from the dead and this outpouring of the divine Spirit comes from this Jesus, now ‘exalted at the right hand of God’ and established as ‘both Lord and Christ’ (Acts 2:17–36). St Paul (I Cor 15:1–14), writing about 25 years after the crucifixion of Christ

(and we know from the Epistle to the Galatians that he was personally acquainted with St Peter and other eye-witnesses of Jesus and founder-members of the Church), reminds his Corinthian friends, whom he had evangelized a few years earlier, of the good news as he originally proclaimed it to them: ‘I would remind you, brethren, in what terms I preached to you the gospel, which you received, in which you stand, by which you are saved, if you hold it fast – unless you believed in vain. For I delivered to you as of first importance what I also received, that Christ died for our sins in accordance with the scriptures, that he was buried, that he was raised on the third day in accordance with the scriptures, and that he appeared to Cephas’, etc. And in answer to a view suggested by some Corinthians that we ourselves have no resurrection to look forward to, he says: ‘If there is no resurrection of the dead, then Christ has not been raised; if Christ has not been raised, then our preaching is in vain and your faith is in vain…But in fact Christ has been raised from the dead, the first fruits of those who have fallen asleep.’ It would thus appear that there was no controversy in the primitive Church about the fact of Christ’s resurrection. The controversy in the Corinthian community about our resurrection is met by St Paul 36

with the knock-down argument which he derives from the universally acknowledged fact that Christ has risen.

Our object of faith This general New Testament affirmation, indeed presupposition, of the resurrection of Jesus found its way into the Church’s Creeds. Of these, an example which has been closely studied is the Old Roman Creed, of which our so-called Apostles’ Creed is a comparatively late expansion. It seems fairly clear that the Old Roman Creed takes as its framework a very early trinitarian confession of faith (I believe in God the Father…and in Jesus Christ his Son…and in the Holy Spirit...) and enlarges the second clause of this confession by a section on the birth, life, death and resurrection of Jesus Christ which is ‘lifted’ with minimal alteration from the form in which the good news was originally published to the Greek-speaking world. In short, the resurrection of Christ has overwhelming support alike from the New Testament and from Christian tradition especially as that is crystallized in the history and use of the Creeds. The roads to faith are many. When, having reached his goal, a man makes his act of faith in God selfrevealed in the Christian message, he thereupon accepts the truth of Christ’s resurrection as an integral

part of that message – although, in his own journey to faith, he may never have had the occasion or the ability to investigate the arguments in favour of the truth of the resurrection in particular. It is important to try to clarify what the resurrection of Christ means as an object of faith, before going on to ask what this implies in respect of historical happening. The two issues are not identical, as we can see from the parallel case of belief in the Assumption of our Lady. We believe that she, ‘having completed the course of her life on earth, was assumed in body and soul to heavenly glory’. But we are told very little about the historical circumstances of this assumption. We are not even told (by this definition) whether our Lady actually died, or whether she was taken up into heaven without actually dying.

The after-life Various views have been held about the after-life. The Greek philosopher, Plato, held that a man is essentially his ‘soul’, cabined and confined, in this life, within a material body, but destined after death to continue to live with no corporal limitations, unless (and until) he had deserved, for his failures in this life, to endure a subsequent birth into another body unconnected with the former one. This is the doctrine or theory of the 38

immortality of the soul. It has been made use of by Christian theologians (e.g. St Thomas Aquinas) to explain the condition of a human person between death and the final resurrection. But when we affirm that Christ has risen from the dead we do not mean merely that his human soul survived the crucifixion and will live for ever. The Jewish religion had its own way of understanding manâ&amp;#x20AC;&amp;#x2122;s make-up. According to this view, man is not a soul inhabiting a body. It would be truer to this Jewish outlook to say that man is an animated body. Hence the only form of after-life which could do full justice to Jewish hopes would be that of a bodily resurrection. Belief in the resurrection of the body (at least for those who had merited eternal life) was accepted by the Pharisees in our Lordâ&amp;#x20AC;&amp;#x2122;s time. According to the Acts of the Apostles, St Paul managed to awaken Pharisaic sympathy for his own teaching, as against the Sadducees, since in proclaiming the resurrection of Christ he was plainly siding with them against the Sadducees, who probably believed in some sort of survival of the soul but not in bodily resurrection. When therefore we profess our faith in the resurrection of Christ, we are saying, first and foremost, that he lives in the fullness of his glorified humanity, risen in the completeness of a living body, the same body that was crucified on Calvary but gloriously transfigured. Thus