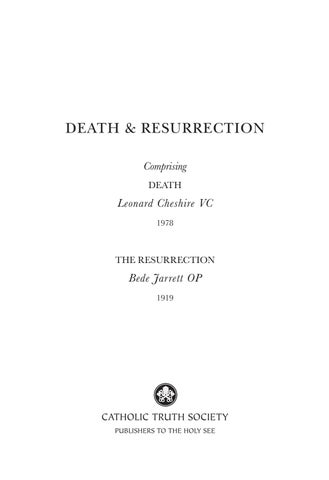 To accompany a man on his final life’s steps…is to receive as much as it is to give. It is to become more of a man oneself.

Leonard Cheshire (1917-1992) was a war hero who after the war spent his life caring for the sick and dying. Bede Jarrett (1881-1934) was a well-known historian and spiritual writer.

INTRODUCTION There are many who have dedicated their lives to the care of the dying and who are qualified to write with authority. With my own limited involvement with those who are dying, I cannot claim to come into this category. Yet, whoever has sat by a deathbed and participated, even if only in total silence, in another personâ&amp;#x20AC;&amp;#x2122;s journey into the unknown has something to offer to the totality of our knowledge of what dying involves, for no two deaths can be entirely the same any more than can two individual human lives. It is solely because I believe this to be true that I have responded to the suggestion that I place on record something of my own experience with those who are about to leave this life, as well as the conclusions that I have drawn from it. I feel tempted to say that of all the acts that we perform during our lifetime, the act of dying is perhaps the most personal of all. Above all it is personal in the sense that the manner in which we die brings to consummation and gives a final, irrevocable direction to our life for all eternity. It is also personal in the sense that it contains a hidden element known only to God and to the person concerned. There takes place in the uttermost depth of our being a dialogue into which no one else on earth, even our closest partner,

the sharer of all our other secrets, can enter. This is not to say that others cannot strengthen and support us, and even share or guide some of our conscious thoughts: indeed they can and indeed they should. But death, it seems to me, is essentially a personal encounter which we, so far as this world is concerned, have to conduct on our own. It is, we know, a personal encounter with God, and God, we also know, is a God of love. We may therefore think that it will prove a loving and merciful encounter, the end of our trial and tribulations and the beginning of eternal happiness. So, in the ultimate sense, it undoubtedly will be. But everything that I have both read and experienced forces me to assert that God is totally beyond our comprehension. Whenever he intervenes in human history, at whatever level and in whatever way, he invariably seems to leave man bemused and uncomprehending. From the opening chapter of Holy Scripture to its very last, despite all that God has revealed to us about himself and our relationship with him throughout the whole of human history, and despite the immense volume of prayer, thought and study that the believing world has given to this ever unfolding revelation, we still fail to recognise God for what he really is, even the very best of us. How poignant, and also how revealing, is the cry of Jesus faced at the end of his lifeâ&amp;#x20AC;&amp;#x2122;s work, as he was, by the incredulity of his apostles: â&amp;#x20AC;&amp;#x2DC;What, Philip, here have I been all this time with you and still you do not recognise me.â&amp;#x20AC;&amp;#x2122; How equally poignant that other cry seven centuries earlier 6

when Judah after her years of exile in Babylon had still not learnt her lesson: ‘For my thoughts are not your thoughts, nor are your ways my ways, says the Lord. As high as the heavens are above the earth, so high are my ways above your ways and my thoughts above your thoughts.’ Only when our own time for that encounter with our Creator has arrived will the real significance of those twin cries be brought home to us. For each of us that encounter at the hour of our death will be a supremely personal moment, different and individual for every single human being. But it will be a moment, I believe, not when the book is just closed and everything so far as our part is concerned over and done with, but a moment when something will be asked of us, when there will be a decision that we must take and some action to which we must make a commitment. In any event there will simultaneously take place another encounter of a different order, that between the person that God willed us to be and which, had we allowed the divine life of Grace to reach its full plenitude within us, we could have been, and the person that we actually are. That in itself must inevitably call for some urgent steps to be taken. Thus the first thing that needs to be said about death is that it is not merely the act of a spoiler striking from without–though that indeed it is–it is also and most fundamentally of all an interior act of our own, a response on our side to the choice that death, the spoiler, sets before us. If not actually the most personal, certainly it is the most significant of all the acts that we are ever called upon to make.

The mystery of Christ our Lordâ&amp;#x20AC;&amp;#x2122;s resurrection must always give a note of hopefulness to the Christianâ&amp;#x20AC;&amp;#x2122;s outlook upon all life. No follower of that risen Master can ever consistently with his faith look with eyes of mere foreboding on the future of the race or of himself. Always there will be that final scene of the Gospel story heartening him, and beckoning to him to hold fast to belief in the final triumph of good, which is of course the final triumph of God. No life, no cause can ever appear so hopelessly defeated as that which seemingly ended on Calvary amid the mockery, the laughter, the darkness, and death-cry; no one can ever be quite so badly situated as that Master was, that Patriot, the Lover, when betrayed, denied, abandoned (save for His mother, a young and dreamy friend, and a rescued woman) He bowed His head on the Cross. Yet defeat was turned to triumph; death to life; and a final dawn dispelled all the darkness. After that, no one has ever any excuse for any fearful view of an ultimate defeat of his hopes or ideals, so long as he can hold these to be the ideals of God. After that, we can be sure

that freedom and justice and truth must, despite every delay or obstruction, win in the end; and when that end comes, then the bitter sufferings of this life are easily seen to be far outbalanced by the exceeding weight of glory, revealed hereafter. This is of course the firm hope that has all along upheld the Christian people in their darkest hours; and even in the earliest ages it was to the Resurrection that they confidently appealed as the final judgement passed by God upon life. Consequently it is easily realized how enormously important it must be to be sure of the truth of the Resurrection. We base our final hopes, our faith, on this as the true judgement on life; then how very careful we have to be to make sure that our hopes and faith are justified. The Christian builds up his edifice upon these foundations and is cheered in his moments of obstruction and delay, in the wearisome business of building, by the knowledge that finally his work will stand because it is built upon a rock. He is therefore correspondingly interested in the question whether after all it is a rock, whether the basic fact is in utter reality a fact at all. Now the argument to defend the truth of the Resurrection is perhaps more carefully arranged by St. Thomas Aquinas than by any other theologian; and to save the prolonged and lengthy process of showing in detail every step of the proof it will be simpler just to set out in the form of a scheme all the various converging evidences which he has so thoughtfully adjusted. But of 42

course the reader should take into his hands the Gospels and refer to each text cited and so see for himself the massive proof gradually rising and showing its firm outlines clear against the sky. The article in which St. Thomas treats of the Resurrection is taken from his Summa Theologica (Part III, Q. 55, Art. 6), and will be found in the English translation: Part III, Second Number, pp. 412-417. It is a very perfect example of the power possessed by St. Thomas of marshalling evidence and proofs till they produce an overwhelming conviction. St. Thomas’s own commentary on this scheme may be quoted from his answer to the first objection which he brings against it (p. 414): “Each separate argument would not suffice of itself for showing perfectly Christ’s Resurrection, yet all taken collectively establish it completely.” To this should be added the argument given by St. Paul as to the actual witnesses who saw the risen Christ: “For I delivered unto you first of all which I also received: how that Christ died for our sins according to the Scriptures; and that He was buried, and that He rose again the third day according to the Scriptures: and that He was seen by Cephas, and after that by the eleven. Then was He seen by more than five hundred brethren at once; of whom many remain until this present, and some are fallen asleep. After that He was seen by James, then by all the Apostles; and last of all He was seen also by me” (I Cor. xv. 3-8). Here then we have St. Paul setting out very carefully a list of people by name who could then mostly have

been consulted for their evidence of the facts, could have been cross-examined and their replies sifted. Of course we are not so situated as were these Corinthians and we cannot go directly to see and talk with people who with their own eyes saw their Redeemer in His risen flesh. Yet Our Lord has forestalled any complaints that we might be thereby led to make by saying to St. Thomas the Apostle: “Because thou hast seen Me, Thomas, thou hast believed: blessed are they that have not seen, and have believed” (John xx. 29). Moreover, the exceedingly careful way in which St. Paul has gathered and arranged his evidence, helps enormously to bear out the details, unconsciously hinted at as well as deliberately described in the various accounts given us in the Gospels. Further, it should be added here that the apparent contradictions in the order of Our Lord’s risen appearances, as given in these Gospels (such as opponents of Christianity love to exhibit) is due entirely to the fragmentary character of their narrative. However the following harmony of these witnesses has been taken from Father Hugh Pope’s Aids to the Study of the Bible, vol. ii, pp. 348-350: I.—THE VISITS OF THE HOLY WOMEN: (a)  Our Lord appears to St. Mary Magdalen first (Mark xvi. 9-11). (b)  Several of them visit the Sepulchre (Matt. xxviii. I: Mark xvi. 1-2: Luke xxiv. 1). 44

Only a glorified body can suddenly vanish (Luke xxiv. 31.)

By way of proofs that the Resurrection was both

Yet was united to His soul, for it gave signs of possessing

Only a glorified body can pass through closed doors (John xx. 19.)

It as substantial, corporeal (Luke xxiv. 39.)

For it was a real body

By way of testimony

THE EVIDENCES FOR THE RESURRECTION