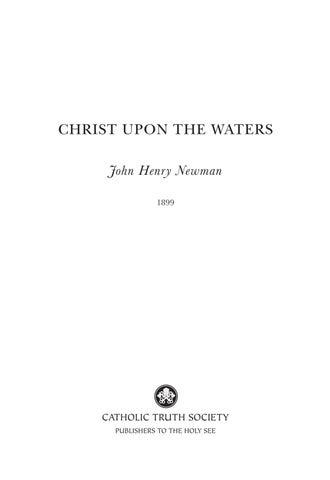 CHRIST UPON THE WATERS

Fear not, therefore, dear brethren of the household of faith, any trouble that may come upon usâ&amp;#x20AC;Ś Doubt not that He will appear to rescue you.

CHRIST UPON THE WATERS A SERMON

Navicula autem in medio mari jactabatur fluctibus; erat enim contrarius ventus. Quartâ autem vigiliâ noctis, venit ad eos ambulans super mare. Et videntes eum super mare ambulantem, turbati sunt, dicentes, Quia phantasma est. Et præ timore clamaverunt. Statimque Jesus locutus est eis, dicens, Habete fiduciam; ego sum; nolite timere.—EVANG. SEC. MATT., c. xiv. v. 24–27. The boat in the midst of the sea was tossed with the waves; for the wind was contrary. And in the fourth watch of the night He came to them, walking upon the sea. And they, seeing Him walking upon the sea, were troubled, saying, It is an apparition. And they cried out for fear. And immediately Jesus spoke to them, saying, Be of good heart; it is I; fear ye not. Preached on October 27, 1850, in St. Chad’s, Birmingham, at the Installation of the Right Rev. Dr. Ullathorne, First Bishop of the See. Reprinted by permission from Cardinal Newman’s Sermons Preached on Various Occasions (Longmans).

The earth is full of the marvels of divine power; “Day to day uttereth speech, and night to night showeth knowledge.” The tokens of Omnipotence are all around us, in the world of matter, and in the world of man: in the dispensation of nature, and in the dispensation of grace. To do impossibilities, I may say, is the prerogative of Him, who made all things out of nothing, who foresees all events before they occur, and controls all wills without compelling them. In emblem of this His glorious attribute, He came to His disciples in the passage I have read to you walking upon the sea—the emblem or hieroglyphic among the ancients of the impossible; to show them that what is impossible with man is possible with God. He who could walk the waters could also ride triumphantly upon what is still more fickle, unstable, tumultuous, treacherous—the billows of human wills, human purposes, human hearts. The bark of Peter was struggling with the waves, and made no progress; Christ came to him walking upon them; He entered the boat, and by entering it He sustained it. He did not abandon Himself to it, but He brought it near to Himself; He did not merely take refuge in it, but He made Himself the strength of it and the pledge and cause of a successful passage. “Presently,” another gospel says, “the ship was at the land whither they were going.” 6

Such was the power of the Son of God, the Saviour of man, manifested by visible tokens in the material world when He came upon earth; and such, too, it has ever since signally shown itself to be, in the history of that mystical ark which He then formed to float upon the ocean of human opinion. He told His chosen servants to form an ark for the salvation of souls; He gave them directions how to construct it,—the length, breadth, and height, its cabins and its windows; and the world, as it gazed upon it, forthwith began to criticize. It pronounced it framed quite contrary to the scientific rules of shipbuilding; it prophesied, as it still prophesies, that such a craft was not sea-worthy; that it was not water-tight; that it would not float; that it would go to pieces and founder. And why it does not, who can say, except that the Lord is in it? Who can say why so old a framework, put together eighteen hundred years ago, should have lasted, against all human calculation, even to this day; always going, and never gone; ever failing, yet ever managing to explore new seas and foreign coasts—except that He, who once said to the rowers, “It is I, be not afraid,” and to the waters, “Peace,” is still in His own ark which He has made, to direct and to prosper her course? And hence so many instances are to be found in history, of the triumph of the bark of Peter amid

adversity of every kind. â&amp;#x20AC;&amp;#x153;The floods have lifted up, the floods have lifted up their voice; the floods have lifted up their waves with the noise of many waters. Wonderful are the surges of the sea; wonderful is the Lord on high.â&amp;#x20AC;? It is the Lord from heaven, who is our light in the gloom, our confidence in the storm. There is nothing hard to Him who is almighty; nothing strange to Him who is all-manifold in operation and all-fruitful in resource. The clouds break, and the sun shines, and the sea is smooth, in its appointed season. Such, my dear Brethren, is the thought which naturally possesses the mind on a day like this, when we are met together solemnly to return thanks to our merciful God for the restoration of the Catholic Hierarchy to the faithful of this land. His works are ever slow and gradual; year after year brings its silent influence and contribution in aid of the object which He may have in view; and we are unable, except artificially and for convenience, to divide into portions or stages what with Him is the continuous introduction of an integral whole. But still from time to time occur greater and more striking events, in which the past and the future are, as it were, summed up; and which, though intrinsically great, may be taken as symbols and are representatives of even more than they are themselves, of the labours and the prospects of a 8

course of years. And such as this is the great act which we are now commemorating: it witnesses that much has been done; it predicts that much is to follow: it is the authoritative recognition and seal of the successes which God has given us, and the instrument of their consolidation. Well then may we rejoice on this day; and happily does it fall on the feast of Our Ladyâ&amp;#x20AC;&amp;#x2122;s Patronage, for to whom, under God, are our acknowledgments more truly due, and our expectations more securely turned, than to His all-holy and ever-glorious Mother? Time was, my Brethren, when the forefathers of our race were a savage tribe, inhabiting a wild district beyond the limits of this quarter of the earth. Whatever brought them thither, they had no local attachments there or political settlement; they were a restless people, and whether urged forward by enemies or by desire of plunder, they left their place, and passing through the defiles of the mountains on the frontiers of Asia, they invaded Europe, setting out on a journey towards the farther west. Generation after generation passed away; and still this fierce and haughty race moved forward. On, on they went; but travel availed them not; the change of place could bring them no truth, or peace, or hope, or stability of heart; they could not flee from themselves. They carried with them their superstitions and their sins,

03 christ upon the waters preview