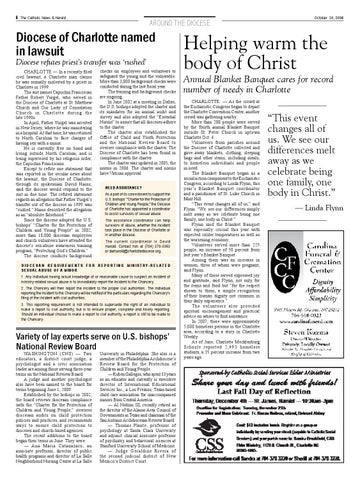 Diocese of Charlotte named in lawsuit Diocese refutes priest’s transfer was ‘rushed’ CHARLOTTE — In a recently filed civil lawsuit, a Charlotte man claims he was sexually molested by a priest in Charlotte in 1999. The suit names Capuchin Franciscan Father Robert Yurgel, who served in the Diocese of Charlotte at St. Matthew Church and Our Lady of Consolation Church in Charlotte during the late 1990s. In April, Father Yurgel was arrested in New Jersey, where he was ministering in a hospital. At that time, he was returned to North Carolina to face charges of having sex with a minor. He is currently free on bond and living outside North Carolina, and is being supervised by his religious order, the Capuchin Franciscans. Except to refute one statement that was reported in the secular news about the lawsuit, the Diocese of Charlotte, through its spokesman David Hains, said the diocese would respond to the suit in due time. The refuted statement regards an allegation that Father Yurgel’s transfer out of the diocese in 1999 was “rushed.” Hains described the allegation as an “absolute falsehood.” Since the diocese adopted the U.S. bishops’ “Charter for the Protection of Children and Young People” in 2002, more than 18,000 diocesan employees and church volunteers have attended the diocese’s sex-abuse awareness training program, “Protecting God’s Children.” The diocese conducts background

checks on employees and volunteers to safeguard the young and the vulnerable. More than 3,800 background checks were conducted during the last fiscal year. The training and background checks are ongoing. In June 2002 at a meeting in Dallas, the U.S. bishops adopted the charter and its mandates for an annual audit and survey and also adopted the “Essential Norms” to assure that all dioceses adhere to the charter. The charter also established the Office of Child and Youth Protection and the National Review Board to oversee compliance with the charter. The Diocese of Charlotte has been found in compliance with the charter. The charter was updated in 2005, the norms in 2006. The charter and norms have Vatican approval. NEED ASSISTANCE? As a part of its commitment to support the U.S. bishops’ “Charter for the Protection of Children and Young People,” the Diocese of Charlotte has appointed a coordinator to assist survivors of sexual abuse. The assistance coordinator can help survivors of abuse, whether the incident took place in the Diocese of Charlotte or in another diocese.  The current coordinator is David Harold. Contact him at (704) 370-3363 or dwharold@charlottediocese.org.

Variety of lay experts serve on U.S. bishops’ National Review Board WASHINGTON (CNS) — Two educators, a district court judge, a psychologist and a civic association leader are among those serving three-year terms on the National Review Board. A judge and another psychologist also have been named to the board for terms beginning June 1, 2009. Established by the bishops in 2002, the board reviews diocesan compliance with the “Charter for the Protection of Children and Young People,” oversees diocesan audits on child protection policies and practices, and recommends ways to ensure child protection to dioceses and church-based agencies. The recent additions to the board began their terms in June. They were: — Ana Maria Catanazaro, an associate professor, director of public health programs and director of La Salle Neighborhood Nursing Center at La Salle

University in Philadelphia. She also is a member of the Philadelphia Archdiocese’s Review Board for the Protection of Children and Young People. — Ruben Gallegos, who spent 33 years as an educator and currently is executive director of International Educational Services Inc., a Los Fresnos, Texas-based child care association for unaccompanied minors from Central America. — Al Notzon III, recently retired as the director of the Alamo Area Council of Governments in Texas and chairman of the San Antonio Archdiocesan Review Board. — Thomas Plante, professor of psychology at Santa Clara University and adjunct clinical associate professor of psychiatry and behavioral sciences at Stanford University School of Medicine. — Judge Geraldine Rivera of the second judicial district of New Mexico’s District Court.

Helping warm the body of Christ

Annual Blanket Banquet cares for record number of needy in Charlotte CHARLOTTE — As the crowd at the Eucharistic Congress began to depart the Charlotte Convention Center, another crowd was gathering nearby. More than 200 people were served by the fourth annual Blanket Banquet outside St. Peter Church in uptown Charlotte Oct. 4. Volunteers from parishes around the Diocese of Charlotte collected and gave away blankets, clothing, sleeping bags and other items, including meals, to homeless individuals and people in need. The Blanket Banquet began as a social action component to the Eucharistic Congress, according to Linda Flynn, this year’s Blanket Banquet coordinator and a parishioner of St. Luke Church in Mint Hill. “This event changes all of us,” said Flynn. “We see our differences simply melt away as we celebrate being one family, one body in Christ.” Flynn said the Blanket Banquet was especially crucial this year with expected colder temperatures as well as the worsening economy. Volunteers served more than 225 people, an increase of 50 percent from last year’s Blanket Banquet. Among them was an increase in women, three of whom were pregnant, said Flynn. Many of those served expressed joy and gratitude, said Flynn, not only for the items and food but “for the respect shown to them, a simple recognition of their human dignity not common in their daily experience.” The volunteers also provided spiritual encouragement and practical advice on where to find assistance. In 2007, there were approximately 5,000 homeless persons in the Charlotte area, according to a story in Charlotte Weekly. As of June, Charlotte Mecklenburg Schools reported 2,493 homeless students, a 35 percent increase from two years ago.

“This event changes all of us. We see our differences melt away as we celebrate being one family, one body in Christ.” — Linda Flynn