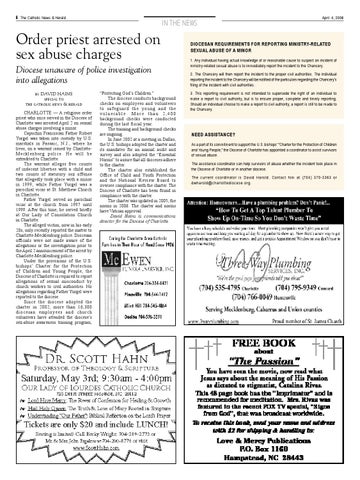 CHARLOTTE — A religious order priest who once served in the Diocese of Charlotte was arrested April 2 on sexual abuse charges involving a minor. Capuchin Franciscan Father Robert Yurgel was taken into custody by U.S. marshals in Passaic, N.J., where he lives, on a warrant issued by CharlotteMecklenburg police. He will be extradited to Charlotte. The warrant alleges five counts of indecent liberties with a child and two counts of statutory sex offense that allegedly took place with a minor in 1999, while Father Yurgel was a parochial vicar at St. Matthew Church in Charlotte. Father Yurgel served as parochial vicar at the church from 1997 until 1999. After this time, he served briefly at Our Lady of Consolation Church in Charlotte. The alleged victim, now in his early 20s, only recently reported the matter to Charlotte-Mecklenburg police. Diocesan officials were not made aware of the allegations or the investigation prior to the April 2 announcement of the arrest by Charlotte-Mecklenburg police. Under the provisions of the U.S. bishops’ Charter for the Protection of Children and Young People, the Diocese of Charlotte is required to report allegations of sexual misconduct by church workers to civil authorities. No allegations regarding Father Yurgel were reported to the diocese. Since the diocese adopted the charter in 2002, more than 16,300 diocesan employees and church volunteers have attended the diocese’s sex-abuse awareness training program,

NEED ASSISTANCE? As a part of its commitment to support the U.S. bishops’ “Charter for the Protection of Children and Young People,” the Diocese of Charlotte has appointed a coordinator to assist survivors of sexual abuse. The assistance coordinator can help survivors of abuse whether the incident took place in the Diocese of Charlotte or in another diocese.  The current coordinator is David Harold. Contact him at (704) 370-3363 or  dwharold@charlottediocese.org.