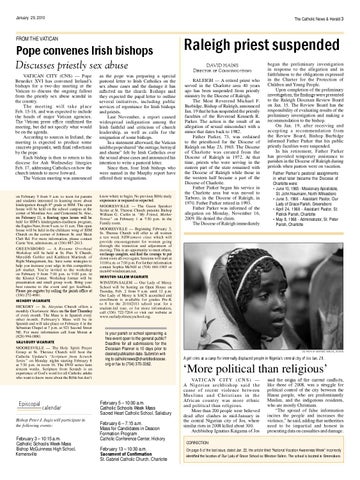 Discusses priestly sex abuse VATICAN CITY (CNS) — Pope Benedict XVI has convened Ireland’s bishops for a two-day meeting at the Vatican to discuss the ongoing fallout from the priestly sex abuse scandal in the country. The meeting will take place Feb. 15-16, and was expected to include the heads of major Vatican agencies. The Vatican press office confirmed the meeting, but did not specify what would be on the agenda. According to sources in Ireland, the meeting is expected to produce some concrete proposals, with final reflections by the pope. Each bishop is then to return to his diocese for Ash Wednesday liturgies Feb. 17, addressing Catholics on how the church intends to move forward. The Vatican meeting was announced

as the pope was preparing a special pastoral letter to Irish Catholics on the sex abuse cases and the damage it has inflicted on the church. Bishops said they expected the papal letter to outline several initiatives, including public services of repentance for Irish bishops and priests. Last November, a report caused widespread indignation among the Irish faithful and criticism of church leadership, as well as calls for the resignation of some bishops. In a statement afterward, the Vatican said the pope shared “the outrage, betrayal and shame” felt by Irish Catholics over the sexual abuse cases and announced his intention to write a pastoral letter. Since then, four Irish bishops who were named in the Murphy report have offered their resignations.

on February 9 from 9 a.m. to noon for parents and students interested in learning more about kindergarten though 8th grade at IHM. The open house will be held on the school campus at the corner of Montlieu Ave. and Centennial St. Also, on February 11, a floating open house will be held for IHM’s kindergarten-readiness program, the Eagles Nest, from 9 a.m. to 11 a.m. This open house will be held in the childcare wing of IHM Church on the corner of Johnson St. and Skeet Club Rd. For more information, please contact Carrie Vest, admissions, at (336) 887-2613. GREENSBORO — A Resume Overhaul Workshop will be held at St. Pius X Church. Meredith Gubler and Kathleen Martinek of Right Management, Inc. have some strategies to help you increase your edge in this competitive job market. You’re invited to the workshop on February 9 from 7:00 p.m. to 9:00 p.m. in the Kloster Center. Workshop format will be presentation and small group work. Bring your best resume to the event and get feedback. Please pre-register by calling the parish office at (336) 272-4681. HICKORY VICARIATE HICKORY — St. Aloysius Church offers a monthly Charismatic Mass on the first Thursday of every month. The Mass is in Spanish every other month. February’s Mass will be in Spanish and will take place on February 4 in the Sebastian Chapel at 7 p.m. at 921 Second Street NE. For more information call Joan Moran at (828) 994-0880. SALISBURY VICARIATE MOORESVILLE — The Holy Spirit Prayer Group at St. Therese Church will host the Catholic Update’s “Scripture from Scratch Series” on Monday nights starting February 8 at 7:30 p.m. in room 16. The DVD series lasts sixteen weeks. Scripture from Scratch is an experience of God’s word for all Catholic adults who want to know more about the Bible but don’t

know where to begin. No previous Bible study experience is required or expected. MOORESVILLE — The Guest Speaker Series at St. Therese Church presents Bishop William G. Curlin in “My Friend, Mother Teresa” on February 1 at 7:30 p.m. in the Family room. MOORESVILLE — Beginning February 3, St. Therese Church will offer to all women a ten week NEWcomers class which will provide encouragement for women going through the transition and adjustment of moving. This is an opportunity to meet others, exchange insights, and find the courage to put down roots all over again. Sessions will start at 10:00 a.m. or 7:00 p.m. For further information contact Sophia McNiff at (704) 660-1965 or mcn4@windstream.net. WINSTON SALEM VICARIATE WINSTON-SALEM — Our Lady of Mercy School will be hosting an Open House on Tuesday, Feb. 2 from 9 a.m. until 12 p.m. Our Lady of Mercy is SACS accredited and enrollment is available for grades Pre-K to 8 for the 2010/2011 school year. for a student-led tour, or for more information, call (336) 722-7204 or visit our website at www.ourladyofmercyschool.org.

Bishop Peter J. Jugis will participate in the following events:

Is your parish or school sponsoring a free event open to the general public? Deadline for all submissions for the Diocesan Planner is 10 days prior to desired publication date. Submit in writing to catholicnews@charlottediocese. org or fax to (704) 370-3382.

began the preliminary investigation in response to the allegation and in faithfulness to the obligations expressed in the Charter for the Protection of Children and Young People. Upon completion of the preliminary investigation, the findings were presented to the Raleigh Diocesan Review Board on Jan. 15. The Review Board has the responsibility of evaluating results of the preliminary investigation and making a recommendation to the bishop. On Jan. 19, after receiving and accepting a recommendation from the Review Board, Bishop Burbidge informed Father Parker that his public priestly faculties were suspended. In his retirement, Father Parker has provided temporary assistance to parishes in the Diocese of Raleigh during periods when pastors were on vacation. Father Parker’s pastoral assignments in what later became the Diocese of Charlotte were: • June 10, 1965 - Missionary Apostolate, St. John Neumann, North Wilkesboro • June 5, 1966 - Assistant Pastor, Our Lady of Grace Parish, Greensboro • April 24, 1968 - Assistant Pastor, St. Patrick Parish, Charlotte • May 8, 1968 - Administrator, St. Peter Parish, Charlotte

A girl cries at a camp for internally displaced people in Nigeria’s central city of Jos Jan. 20.

‘More political than religious’ VAT I C A N C I T Y ( C N S ) — A Nigerian archbishop said the cause of recent violence between Muslims and Christians in the African country was more ethnic and political than religious. More than 200 people were believed dead after clashes in mid-January in the central Nigerian city of Jos, where similar riots in 2008 killed about 300. Archbishop Ignatius Kaigama of Jos

said the origin of the current conflicts, like those of 2008, was a struggle for political control of the city between the Hausa people, who are predominantly Muslim, and the indigenous residents, who are mostly Christians. “The spread of false information incites the people and increases the violence,” he said, adding that authorities need to be impartial and honest in presenting data on casualties and damage.

CORRECTION On page 5 of the last issue, dated Jan. 22, the article titled “National Vocation Awareness Week” incorrectly identified the location of Our Lady of Grace School as Winston-Salem. The school is located in Greensboro.