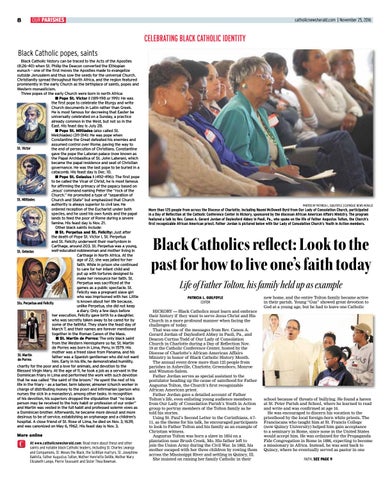 Celebrating black Catholic identity Black Catholic popes, saints Black Catholic history can be traced to the Acts of the Apostles (8:26-40) when St. Philip the Deacon converted the Ethiopian eunuch – one of the first moves the Apostles made to evangelize outside Jerusalem and thus sow the seeds for the universal Church. Christianity spread throughout North Africa, and the region featured prominently in the early Church as the birthplace of saints, popes and Western monasticism. Three popes of the early Church were born in north Africa: n Pope St. Victor I (189-198 or 199): He was the first pope to celebrate the liturgy and write Church documents in Latin rather than Greek. He is most famous for decreeing that Easter be universally celebrated on a Sunday, a practice already common in the West, but not so in the East. His feast day is July 28. n Pope St. Miltiades (also called St. Melchiades) (311-314): He was pope when Constantine the Great defeated his enemies and assumed control over Rome, paving the way to St. Victor the end of persecution of Christians. Constantine gave the pope the Lateran palace (now known as the Papal Archbasilica of St. John Lateran), which became the papal residence and seat of Christian governance. He was the last pope to be buried in a catacomb. His feast day is Dec. 10. n Pope St. Gelasius I (492-496): The first pope to be called the Vicar of Christ, he is most famous for affirming the primacy of the papacy based on Jesus’ command naming Peter the “rock of the Church.” He promoted a type of “separation of St. Miltiades Church and State” but emphasized that Church authority is always superior to civil law. He ordered reception of the Eucharist under both species, and he used his own funds and the papal lands to feed the poor of Rome during a severe famine. His feast day is Nov. 21. Other black saints include: n St. Perpetua and St. Felicity: Just after the death of Pope St. Victor I, St. Perpetua and St. Felicity underwent their martyrdom in Carthage, around 203. St. Perpetua was a young, well-educated noblewoman and mother living in St. Gelasius Carthage in North Africa. At the age of 22, she was jailed for her faith. While in prison she continued to care for her infant child and put up with tortures designed to make her renounce her faith. St. Perpetua was sacrificed at the games as a public spectacle. St. Felicity was a pregnant slave girl who was imprisoned with her. Little is known about her life because, Sts. Perpetua and Felicity unlike Perpetua, she did not keep a diary. Only a few days before her execution, Felicity gave birth to a daughter, who was secretly taken away to be cared for by some of the faithful. They share the feast day of March 7, and their names are forever mentioned together in the Roman Canon of the Mass. n St. Martin de Porres: The only black saint from the Western Hemisphere so far, St. Martin de Porres was born in Lima, Peru, in 1579. His mother was a freed slave from Panama, and his St. Martin father was a Spanish gentleman who did not want de Porres him. Early in his life, he demonstrated humility, charity for the poor and a love for animals, and devotion to the Blessed Virgin Mary. At the age of 11, he took a job as a servant in the Dominican friary in Lima and performed the work with such devotion that he was called “the saint of the broom.” He spent the rest of his life in the friary – as a barber, farm laborer, almoner (church worker in charge of distributing money to the poor) and infirmarian (person who nurses the sick in a monastery), among other tasks. In recognition of his devotion, his superiors dropped the stipulation that “no black person may be received to the holy habit or profession of our order” and Martin was vested in the full habit and professed solemn vows as a Dominican brother. Afterwards, he became more devout and more desirous to be of service, establishing an orphanage and a children’s hospital. A close friend of St. Rose of Lima, he died on Nov. 3, 1639, and was canonized on May 6, 1962. His feast day is Nov. 3.

More than 125 people from across the Diocese of Charlotte, including Naomi McDowell Byrd from Our Lady of Consolation Church, participated in a Day of Reflection at the Catholic Conference Center in Hickory, sponsored by the diocesan African American Affairs Ministry. The program featured a talk by Rev. Canon A. Gerard Jordan of Daylesford Abbey in Paoli, Pa., who spoke on the life of Father Augustus Tolton, the Church’s first recognizable African American priest. Father Jordan is pictured below with Our Lady of Consolation Church’s Youth in Action members.

Black Catholics reflect: Look to the past for how to live one’s faith today Life of Father Tolton, his family held up as example Patricia L. Guilfoyle Editor

HICKORY — Black Catholics must learn and embrace their history if they want to serve Jesus Christ and His Church in a more profound manner when facing the challenges of today. That was one of the messages from Rev. Canon A. Gerard Jordan of Daylesford Abbey in Paoli, Pa., and Deacon Curtiss Todd of Our Lady of Consolation Church in Charlotte during a Day of Reflection Nov. 19 at the Catholic Conference Center, hosted by the Diocese of Charlotte’s African American Affairs Ministry in honor of Black Catholic History Month. The annual event drew more than 125 people from parishes in Asheville, Charlotte, Greensboro, Monroe and Winston-Salem. Father Jordan serves as special assistant to the postulator heading up the cause of sainthood for Father Augustus Tolton, the Church’s first recognizable African American priest. Father Jordan gave a detailed account of Father Tolton’s life, even enlisting young audience members from Our Lady of Consolation Parish’s Youth in Action group to portray members of the Tolton family as he told his stories. Using St. Paul’s Second Letter to the Corinthians, 4:711, as the theme for his talk, he encouraged participants to look to Father Tolton and his family as an example of Christian witness. Augustus Tolton was born a slave in 1854 on a plantation near Brush Creek, Mo. His father left to join the Union Army during the Civil War. In 1862, his mother escaped with her three children by rowing them across the Mississippi River and settling in Quincy, Ill. She insisted on raising her family Catholic in their

new home, and the entire Tolton family became active in their parish. Young “Gus” showed great devotion to God at a young age, but he had to leave one Catholic

school because of threats of bullying. He found a haven at St. Peter Parish and School, where he learned to read and write and was confirmed at age 16. He was encouraged to discern his vocation to the priesthood by the local foreign-born white priests. The Franciscans who taught him at St. Francis College (now Quincy University) helped him gain acceptance to a seminary in Rome, since none in the United States would accept him. He was ordained for the Propaganda Fide Congregation in Rome in 1886, expecting to become a missionary in Africa. Instead, he was sent back to Quincy, where he eventually served as pastor in one FAITH, SEE page 9