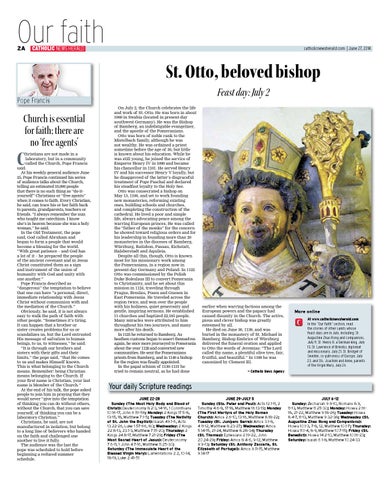 Church is essential for faith; there are no ‘free agents’

hristians are not made in a laboratory, but in a community called the Church, Pope Francis said. At his weekly general audience June 25, Pope Francis continued his series of audience talks about the Church, telling an estimated 33,000 people that there is no such thing as “do-ityourself” Christians or “free agents” when it comes to faith. Every Christian, he said, can trace his or her faith back to parents, grandparents, teachers or friends. “I always remember the nun who taught me catechism. I know she’s in heaven because she was a holy woman,” he said. In the Old Testament, the pope said, God called Abraham and began to form a people that would become a blessing for the world. “With great patience – and God has a lot of it – he prepared the people of the ancient covenant and in Jesus Christ constituted them as a sign and instrument of the union of humanity with God and unity with one another.” Pope Francis described as “dangerous” the temptation to believe that one can have “a personal, direct, immediate relationship with Jesus Christ without communion with and the mediation of the Church.” Obviously, he said, it is not always easy to walk the path of faith with other people. “Sometimes it’s tiring. It can happen that a brother or sister creates problems for us or scandalizes us, but the Lord entrusted His message of salvation to human beings, to us, to witnesses,” he said. “It is through our brothers and sisters with their gifts and their limits,” the pope said, “that He comes to us and makes Himself known. This is what belonging to the Church means. Remember: being Christian means belonging to the Church. If your first name is Christian, your last name is Member of the Church.” At the end of his talk, the pope asked people to join him in praying that they would never “give into the temptation of thinking you can do without others, without the Church, that you can save yourself, of thinking you can be a laboratory Christian.” Christians, he said, are not manufactured in isolation, but belong to a long line of believers who handed on the faith and challenged one another to live it fully. The audience was the last the pope was scheduled to hold before beginning a reduced summer schedule.

On July 2, the Church celebrates the life and work of St. Otto. He was born in about 1060 in Swabia (located in present-day southwest Germany). He was the Bishop of Bamberg, an indefatigable evangelizer, and the apostle of the Pomeranians. Otto was born of noble rank to the Mistelbach family, although he was not wealthy. He was ordained a priest sometime before the age of 30, but little is known about his education. While he was still young, he joined the service of Emperor Henry IV in 1090 and became his chancellor in 1101. He served Henry IV and his successor Henry V loyally, but he disapproved of the latter’s disgraceful treatment of Pope Paschal and declared his steadfast loyalty to the Holy See. Otto was consecrated a bishop on May 13, 1106, and set to work founding new monasteries, reforming existing ones, building schools and churches, and completing the construction of the cathedral. He lived a poor and simple life, always advocating peace among the warring European princes. He was called the “father of the monks” for the concern he showed toward religious orders and for his leadership in founding more than 20 monasteries in the dioceses of Bamberg, Würzburg, Ratisbon, Passau, Eichstatt, Halsberstadt and Aquileia. Despite all this, though, Otto is known most for his missionary work among the Pomeranians, in a region now in present-day Germany and Poland. In 1122 Otto was commissioned by the Polish Duke Boleslaus III to convert Pomerania to Christianity, and he set about this mission in 1124, traveling through Prague, Breslau, Posen and Gnesen in East Pomerania. He traveled across the region twice, and won over the people with his holiness, quiet generosity and gentle, inspiring sermons. He established 11 churches and baptized 22,165 people. Many miracles were attributed to him throughout his two journeys, and many more after his death. In 1125 he returned to Bamberg. As heathen customs began to assert themselves again, he once more journeyed to Pomerania about the year 1128 and converted new communities. He sent the Pomeranians priests from Bamberg, and in 1140 a bishop for the region was finally appointed. In the papal schism of 1130-1131 he tried to remain neutral, as he had done

earlier when warring factions among the European powers and the papacy had caused disunity in the Church. The active, pious and clever bishop was greatly esteemed by all. He died on June 30, 1139, and was buried in the monastery of St. Michael in Bamberg. Bishop Embrice of Würzburg delivered the funeral oration and applied to Otto the words of Jeremias: “The Lord called thy name, a plentiful olive tree, fair, fruitful, and beautiful.” In 1189 he was canonized by Clement III.

More online At www.catholicnewsherald.com: In the “Our Faith” section, read the stories of other saints whose feast days are in July, including: St. Augustine Zhao Rong and companions, July 9; St. Henry II, a German king, July 13; St. Lawrence of Brindisi, diplomat and missionary, July 21; St. Bridget of Sweden, co-patroness of Europe, July 23; and Sts. Joachim and Anne, parents of the Virgin Mary, July 26.