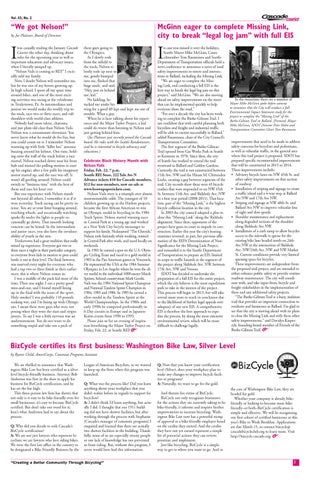 by Joe Platzner, Board of Directors

was casually reading the January Cascade Courier the other day, thinking about rides for the upcoming year as well as important education and advocacy issues, when I literally jumped up. “Nelson Vails is coming to REI!” I excitedly told my family. Now, I doubt Nelson will remember me, but he was one of my heroes growing up. In high school, I spent all my spare time around bikes, and one of the most exciting activities was racing at the velodrome in Trexlertown, Pa. As intermediates and juniors we would make the weekly trip to the track, race two or three races, and rub shoulders with world-class athletes. Nobody had more talent, charisma, and just plain old class than Nelson Vails. Nelson was a consummate showman. You never knew what he would do for fun, but you could count on it. I remember Nelson warming up with little “killer bee” antenna buzzing around his helmet. One time, holding onto the wall of the track before a race started, Nelson reached down near his front hub and mimed the pulling motion to start up his engine; after a few pulls his imaginary motor started up, and the race was off. It wasn’t all goofing around; Nelson could switch to “business time” with the best of them and race his heart out. But one experience with Nelson stands out beyond all others; I remember it as if it were yesterday. Track racing can be pretty intense. You are at your limit banging around, touching wheels, and occasionally watching sparks fly under the lights as people occasionally go down. That smooth looking concrete can be brutal. In the intermediate and junior races, you also have the invulnerability of youth in the mix. Trexlertown had a great tradition that really mixed up experience. Everyone got two or three races a night in their particular category, so everyone from kids to masters to pros could battle it out at their level. The final, however, was reserved every night for everyone who had a top two or three finish in their earlier races; this is where Nelson comes in. I was a middle of the pack kid most of the time. Then one night, I ran a pretty good miss-and-out, and I found myself lining up in the final with the icons of the sport. Holy smokes! I was probably 110 pounds soaking wet, and I’m lining up with Olympians. I mean these were guys who were not posing when they wore the stars and stripes jerseys. To say I was a little nervous was an understatement. You do not want to do something stupid and take out a pack of

these guys going to the Olympics. As I slowly rode from the infield to the track, Nelson silently rode up next to me, gently bumped into me, flashed that huge smile, and said, “Hey, just sit behind me, kid.” No kidding, he tucked me under his wing for a good 40 laps and kept me out of trouble. What a guy. When he is here talking about his experiences and the Major Taylor Project, a kid could do worse than listening to Nelson and just getting behind him. (Joe Platzner just recently joined the Cascade board. He rides with the Seattle Randonneurs, and he is interested in bicycle advocacy and education.)

Celebrate Black History Month with Nelson Vails Friday, Feb. 22, 7 p.m. Seattle REI Store, 222 Yale Ave N Advance tickets $10 for Cascade members, $12 for non-members, now on sale at www.brownpapertickets.com. Nelson Vails story is a triumph over almost insurmountable odds. The youngest of 10 children growing up in the Harlem projects, became the first African American to win an Olympic medal in bicycling in the 1984 Track Sprint. Nelson started winning races in Central Park at a young age and worked as a New York City bicycle messenger to support his family. Nicknamed “The Cheetah,” Nelson rode furiously while working, trained in Central Park after work, and raced locally on weekends. In 1981 he earned a spot on the U.S. Olympic Cycling Team and raced to a gold medal in 1983 in the Pan American games in Venezuela. He represented the USA at the 1984 Summer Olympics in Los Angeles where he won the silver medal in the individual 1000-meter Match Sprints, behind countryman Mark Gorski. Vails was the 1984 National Sprint Champion and National Tandem Sprint Champion in 1984, 1985 and 1986. In 1985 he earned a silver medal in the Tandem Sprint at the World Championships. In the 1980s and early 1990s he competed professionally in 6-Day circuits in Europe and in Japanese Keirin events from 1990 to 1995. Please join us for an evening of inspiration benefitting the Major Taylor Project on Friday, Feb. 22, at Seattle REI!

n case you missed it over the holidays, Seattle Mayor Mike McGinn, Councilmember Tom Rasmussen and Seattle Department of Transportation officials held a news conference to announce a series of road safety improvements to streets and intersections in Ballard, including the Missing Link. “We are eager to complete the Missing Link, and conducting a full EIS is the best way to break the legal log jam on this project,” said McGinn. “We are also moving ahead on safety improvements on the street that can be implemented quickly to help everyone share the road.” “For over a decade the city has been working to complete the Burke-Gilman Trail. I am confident that with careful planning both bicyclists and freight and industrial traffic will be able to coexist successfully in Ballard,” added Rasmussen, chair of the City Council’s Transportation Committee. The first segment of the Burke-Gilman Trail opened from Gas Works Park in Seattle to Kenmore in 1978. Since then, the city of Seattle has worked to extend the trail westward to Ballard and Golden Gardens. Currently, the trail is not constructed between 11th Ave. NW and the Hiram M. Chittenden Locks, creating a gap between segments of the trail. City records show there were 45 bicycle crashes that were responded to on NW 45th St. between 11th Ave. and Shilshole Ave. NW in a four year period (2008-2011). That location, part of the “Missing Link,” is the highest bicycle collision location in the city. In 2003 the city council adopted a plan to close this “Missing Link” along the Shilshole alignment. Since then, opponents of the project have gone to court to impede its construction. Earlier this year the city’s hearing examiner reversed, in part, her previous affirmation of the SEPA Determination of NonSignificance for the Missing Link Project, and remanded it to the Seattle Department of Transportation to prepare an EIS, limited in scope to traffic hazards in the segment of the project along Shilshole Ave. NW, between 17th Ave. NW and Vernon. SDOT has decided to undertake the preparation of a full EIS for the entire project, which the city believes is the most expeditious path to take in the interest of the project. This process will begin in 2013, but will take several more years to reach its conclusion due to the likelihood of further legal appeals over adequacy of any new EIS. A comprehensive EIS is therefore the best approach to expedite the process, by doing the most extensive environmental review, which will be more difficult to challenge legally.

In the meantime there are a number of

improvements that need to be made to address safety concerns for bicyclists and pedestrians, as well as vehicular traffic, in the general area where this trail project is proposed. SDOT has prepared specific recommended improvements that will be constructed in 2013 or 2014. These improvements include: • Advisory bicycle lanes on NW 45th St. and other safety improvements on that section of roadway • Installation of striping and signage to create a traffic island and a 4-way stop at Ballard Ave NW and 17th Ave NW. • Striping and signage at NW 48th St. and Ballard Ave NW to improve vehicular line of sight and slow speeds. • Shoulder maintenance and replacement along degraded sections of the shoulder along Shilshole Ave NW. • Installation of a curb ramp to allow bicycles access to the sidewalk to queue for the existing bike lane headed north on 24th Ave NW at the intersection of Shilshole Ave. NW/24th Ave. NW and NW Market St. Current conditions provide very limited queuing space for bicycles. These improvements are independent from the proposed trail project, and are intended to either enhance public safety or provide routine roadway maintenance. The city will coordinate with, and take input from, bicycle and freight stakeholders in the implementation of these and any additional safety projects. “The Burke-Gilman Trail is a busy, multiuse trail that provides an important connection to residents and businesses in Ballard. I’m glad to see that the city is moving ahead with its plans to close the Missing Link and with these other safety improvements,” said Davidya Kasperzyk, founding board member of Friends of the Burke-Gilman Trail.

BizCycle certifies its first business: Washington Bike Law, Silver Level by Ryann Child, AmeriCorps, Commute Programs Assistant We are thrilled to announce that Washington Bike Law has been certified as a silver level bicycle-friendly business. Attorney Bob Anderton was first in the door to apply his business for BizCycle certification, and he has set the bar high. This three-person law firm has shown that not only is it easy to be bike-friendly even for small businesses, it’s easy to become BizCycle certified. But don’t take our word for it; here’s what Anderton had to say about the process. Q: Why did you decide to seek Cascade’s BizCycle certification? A: We are not just lawyers who represent bicyclists; we are lawyers who love riding bikes. We were the first law office in the country to be designated a Bike Friendly Business by the

League of American Bicyclists, so we wanted to keep up the firsts when this program was launched. Q: What was the process like? Did you learn anything about your workplace that you didn’t realize before in regards to support for bicyclists? A: I didn’t think I’d learn anything, but actually I did. I thought that our 1911 building did not have shower facilities, but after working through the process with Stephanie [Cascade’s manager of commute programs] I enquired and learned that there are actually two shower facilities in the building. Thankfully, none of us are especially sweaty people so our lack of knowledge has not prevented us from riding. But, without this program, I never would have had this information.

“Creating a Better Community Through Bicycling”

Q: Now that you know your certification level (Silver), does your workplace plan to make any changes to improve bicycle facilities or programs? A: Naturally, we want to go for the gold. And therein lies virtue of BizCycle. BizCycle not only recognizes businesses for the actions they are currently taking to be bike-friendly, it informs and inspires further improvements to increase bicycling. Washington Bike Law now has a powerful stamp of approval as a bike-friendly employer based on the credits they earned. And the credits they have not yet earned represent a simple list of potential actions they can review, prioritize and implement. Just like bicycling, BizCycle is a simple way to get to where you want to go. And in

the case of Washington Bike Law, they are headed for gold. Whether your company is already bikefriendly or looking to become more bikefriendly–or both–BizCycle certification is simple and effective. We will be recognizing our first cohort of certified businesses at this year’s Bike to Work Breakfast. Applications are due March 15, so contact bizcycle@ cascadebicycleclub.org to learn more. Visit http://bizcycle.cascade.org. 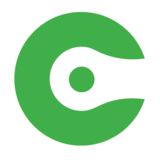