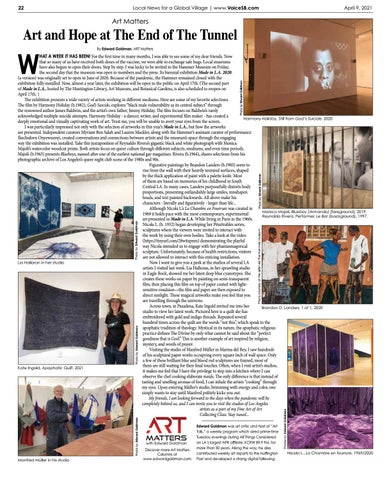 Art and Hope at The End of The Tunnel

Manfred Müller in his studio

Edward Goldman was art critic and host of “Art Talk,” a weekly program which aired prime-time Tuesday evenings during All Things Considered on LA’s largest NPR affiliate, KCRW 89.9 FM, for more than 30 years. Along the way, he also contributed weekly art reports to the Huffington Post and developed a strong digital following.

Photo courtesy of the artist via The Hammer Museum

HAT A WEEK IT HAS BEEN! For the first time in many months, I was able to see some of my dear friends. Now that so many of us have received both doses of the vaccine, we were able to exchange safe hugs. Local museums have also begun to open their doors. Step by step. I was lucky to be invited to the Hammer Museum on Friday, the second day that the museum was open to members and the press. Its biennial exhibition Made in L.A. 2020: (a version) was originally set to open in June of 2020. Because of the pandemic, the Hammer remained closed with the exhibition fully installed. Now, almost a year later, the exhibition will be open to the public on April 17th. (The second part of Made in L.A., hosted by The Huntington Library, Art Museum, and Botanical Gardens, is also scheduled to reopen on April 17th. ) The exhibition presents a wide variety of artists working in different mediums. Here are some of my favorite selections. The film by Harmony Holiday (b.1982), God’s Suicide, explores “black male vulnerability as its central subject” through the renowned author James Baldwin, and the artist’s own father, Jimmy Holiday. The film focuses on Baldwin’s rarely acknowledged multiple suicide attempts. Harmony Holiday - a dancer, writer, and experimental film maker - has created a Harmony Holiday, Still from God’s Suicide, 2020 deeply emotional and visually captivating work of art. Trust me, you will be unable to avert your eyes from the screen. I was particularly impressed not only with the selection of artworks in this year’s Made in L.A., but how the artworks are presented. Independent curators Myriam Ben Salah and Lauren Mackler, along with the Hammer’s assistant curator of performance Ikechukwu Onyewuenyi, created conversations and connections between artists and the museum’s space through the engaging way the exhibition was installed. Take this juxtaposition of Reynaldo Rivera’s gigantic black and white photograph with Monica Majoli’s watercolor woodcut prints. Both artists focus on queer culture through different subjects, mediums, and even time periods. Majoli (b.1963) presents Blueboys, named after one of the earliest national gay magazines. Rivera (b.1964), shares selections from his photographic archive of Los Angeles’s queer night club scene of the 1980s and 90s. Figurative paintings by Brandon Landers (b.1985) seem to rise from the wall with their heavily textured surfaces, shaped by the thick application of paint with a palette knife. Most of them are based on memories of his childhood in South Central LA. In many cases, Landers purposefully distorts body proportions, presenting outlandishly large smiles, misshapen heads, and text painted backwards. All above make his characters - literally and figuratively - larger than life... Although Nicola L.’s La Chambre en Fourrure was created in Monica Majoli, Blueboy (Armando) (foreground), 2019. 1969 it holds pace with the most contemporary, experimental Reynaldo Rivera, Performer, Le Bar (background), 1997. art presented in Made in L.A. While living in Paris in the 1960s Nicola L. (b. 1932) began developing her Pénétrables series, sculptures where the viewers were invited to interact with the work by using their own bodies. Take a look at the video (https://tinyurl.com/28w4xpnm) demonstrating the playful way Nicola intended us to engage with her phantasmagorical sculpture. Unfortunately, because of health restrictions, visitors are not allowed to interact with this enticing installation. Lia Halloran in her studio Now I want to give you a peek at the studios of several LA artists I visited last week. Lia Halloran, in her sprawling studio in Eagle Rock, showed me her latest deep blue cyanotypes. She creates these works on paper by painting on semi-transparent film, then placing this film on top of paper coated with lightsensitive emulsion—the film and paper are then exposed to direct sunlight. These magical artworks make you feel that you are travelling through the universe. Across town, in Pasadena, Kate Ingold invited me into her Brandon D. Landers, 1 of 1, 2020 studio to view her latest work. Pictured here is a quilt she has embroidered with gold and indigo threads. Repeated several hundred times across the quilt are the words “not this”, which speak to the apophatic tradition of theology. Mystical in its nature, the apophatic religious practice defines The Divine by only what cannot be said about the “perfect goodness that is God.” This is another example of art inspired by religion, mystery, and words of prayer. Visiting the studio of Manfred Müller in Marina del Rey, I saw hundreds of his sculptural paper works occupying every square inch of wall space. Only a few of these brilliant blue and blood red sculptures are framed, most of them are still waiting for their final touches. Often, when I visit artist’s studios, Kate Ingold, Apophatic Quilt, 2021 it makes me feel that I have the privilege to step into a kitchen where I can observe the chef cooking elaborate meals. The only difference is that instead of tasting and smelling aromas of food, I can inhale the artists “cooking” through my eyes. Upon entering Müller’s studio, brimming with energy and color, one simply wants to stay until Manfred politely kicks you out. My friends, I am looking forward to the days when the pandemic will be completely behind us, and I can invite you to visit the studios of Los Angeles artists as a part of my Fine Art of Art Collecting Class. Stay tuned... 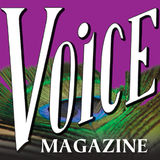