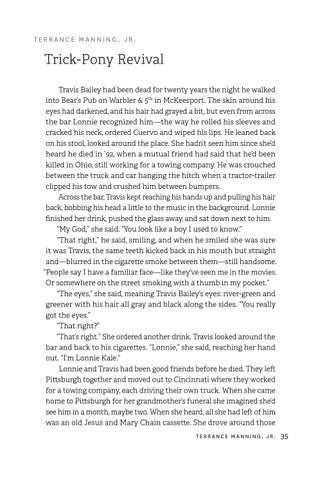 Trick-Pony Revival Travis Bailey had been dead for twenty years the night he walked into Bear’s Pub on Warbler &amp; 5th in McKeesport. The skin around his eyes had darkened, and his hair had grayed a bit, but even from across the bar Lonnie recognized him—the way he rolled his sleeves and cracked his neck, ordered Cuervo and wiped his lips. He leaned back on his stool, looked around the place. She hadn’t seen him since she’d heard he died in ’92, when a mutual friend had said that he’d been killed in Ohio, still working for a towing company. He was crouched between the truck and car hanging the hitch when a tractor-trailer clipped his tow and crushed him between bumpers. Across the bar, Travis kept reaching his hands up and pulling his hair back, bobbing his head a li!le to the music in the background. Lonnie finished her drink, pushed the glass away, and sat down next to him. “My God,” she said. “You look like a boy I used to know.” “That right,” he said, smiling, and when he smiled she was sure it was Travis, the same teeth kicked back in his mouth but straight and—blurred in the cigare!e smoke between them—still handsome. “People say I have a familiar face—like they’ve seen me in the movies. Or somewhere on the street smoking with a thumb in my pocket.” “The eyes,” she said, meaning Travis Bailey’s eyes: river-green and greener with his hair all gray and black along the sides. “You really got the eyes.” “That right?” “That’s right.” She ordered another drink. Travis looked around the bar and back to his cigare!es. “Lonnie,” she said, reaching her hand out. “I’m Lonnie Kale.” Lonnie and Travis had been good friends before he died. They le# Pi!sburgh together and moved out to Cincinnati where they worked for a towing company, each driving their own truck. When she came home to Pi!sburgh for her grandmother’s funeral she imagined she’d see him in a month, maybe two. When she heard, all she had le# of him was an old Jesus and Mary Chain casse!e. She drove around those TERRANCE MANNING, JR. 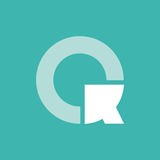