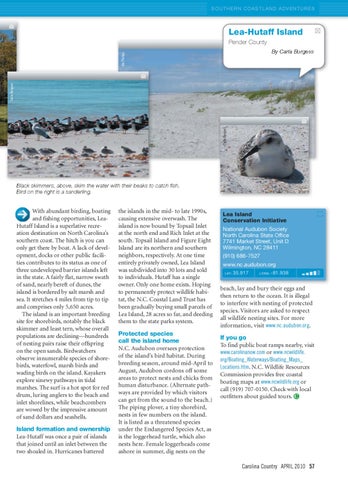 Black skimmers, above, skim the water with their beaks to catch fish. Bird on the right is a sanderling.

With abundant birding, boating W aand fishing opportunities, LeaHutaff H taaff Island is a superlative recreHu ation destination on North Carolina’s southern coast. The hitch is you can only get there by boat. A lack of development, docks or other public facilities contributes to its status as one of three undeveloped barrier islands left in the state. A fairly flat, narrow swath of sand, nearly bereft of dunes, the island is bordered by salt marsh and sea. It stretches 4 miles from tip to tip and comprises only 5,650 acres. The island is an important breeding site for shorebirds, notably the black skimmer and least tern, whose overall populations are declining—hundreds of nesting pairs raise their offspring on the open sands. Birdwatchers observe innumerable species of shorebirds, waterfowl, marsh birds and wading birds on the island. Kayakers explore sinewy pathways in tidal marshes. The surf is a hot spot for red drum, luring anglers to the beach and inlet shorelines, while beachcombers are wowed by the impressive amount of sand dollars and seashells. Island formation and ownership Lea-Hutaff was once a pair of islands that joined until an inlet between the two shoaled in. Hurricanes battered

the islands in the mid- to late 1990s, causing extensive overwash. The island is now bound by Topsail Inlet at the north end and Rich Inlet at the south. Topsail Island and Figure Eight Island are its northern and southern neighbors, respectively. At one time entirely privately owned, Lea Island was subdivided into 30 lots and sold to individuals. Hutaff has a single owner. Only one home exists. Hoping to permanently protect wildlife habitat, the N.C. Coastal Land Trust has been gradually buying small parcels of Lea Island, 28 acres so far, and deeding them to the state parks system. Protected species call the island home N.C. Audubon oversees protection of the island’s bird habitat. During breeding season, around mid-April to August, Audubon cordons off some areas to protect nests and chicks from human disturbance. (Alternate pathways are provided by which visitors can get from the sound to the beach.) The piping plover, a tiny shorebird, nests in few numbers on the island. It is listed as a threatened species under the Endangered Species Act, as is the loggerhead turtle, which also nests here. Female loggerheads come ashore in summer, dig nests on the

beach, lay and bury their eggs and then return to the ocean. It is illegal to interfere with nesting of protected species. Visitors are asked to respect all wildlife nesting sites. For more information, visit www.nc.audubon.org. If you go To find public boat ramps nearby, visit www.carolinanow.com or www.ncwildlife. org/Boating_Waterways/Boating_Maps_ Locations.htm. N.C. Wildlife Resources 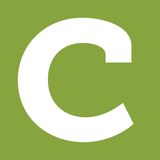