The artist and the honeybees. The questionable lightness of bee-ing 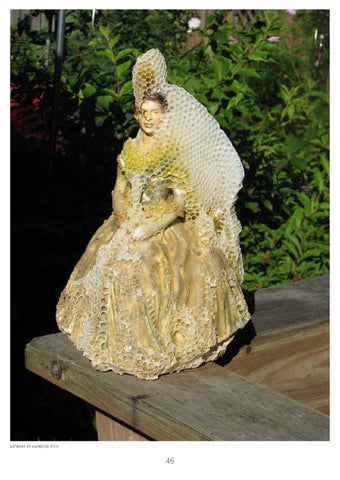 The artists and the honeybees

the questionable lightness of bee-ing interview by Caridad Botella Lorenzo

realists, such as Jean-Baptist-Camille Corot, turned to it to represent it as it was perceived with their own eyes while painting directly au plein air. It’s no coincidence that Optics were moving forward during that period. Today, environmental issues, affecting the well-being of the plant and therefore having an impact on our human species, are at the core of artists’ interest.

Scrolling through a huge amount of useless information on the social media, I came across something that, in the blink of an eye, blew my mind and, I’m sure, will stay in it forever. This is the effect Aganetha Dyck’s work had on me when I saw the images on an online article. Small, Rococolike sculptures, intervened by real honeycomb structures. Beyond the poetic and unworldly beauty they convey, these works point to one of the most remarkable collaborations I have heard of: the artists and the honeybees.

So, while this might seem like the latest trend, Dyck sets a precedent which goes far back. On a certain level, her approach makes me think of Joseph Beuys sharing a space with a coyote for three days: both are about interspecies communication, something which is very important to Dyck. Aganetha doesn’t work directly with bees since she is not a beekeeper. She rents the apiary and works together with the beekeeper and scientists who become part of her working process. Bees are her “guest workers” and she insists that most of the credit should be given to them. In order to engage bees, Dyck introduces objects covered with wax into the apiary. Bees then proceed to build honeycombs around the objects, sometimes even mending them, starting a back-and-forth communication process between the artist and the insects.

Canadian artist, Aganetha Dyck (Winnipeg, 1934) has been working with bees for about 20 years. As stated on her website, she is interested in environmental issues, specifically the power of the small. On a short video about her work she comments: “The power of the honeybee is to keep the world population alive.” She is referring to the increasing loss of honeybee colonies which is threatening the survival of many of our daily foods. While scientists try to figure out why this is happening and what the effects on humans will be, this veteran Canadian artist has found a way to get to know honeybees while making them part of her art practice. Throughout history, representing nature has always been linked to how we understand it at a given moment in time. For example, nature’s centennial symbolic value was questioned when 19th century

Enlightenment Out of all the types of objects the artist has worked with (from shoes to helmets and fishing traps), the

small XVIII century, gallant sculptures strike me the most, because of the intense dialogue that emerges from two elements, historical and environmental. On the one hand, we have figures which evoke a time when the end of the Ancient Regime was near and the French Revolution was about to burst out. There reigned a feeling that the Apocalypse was around the corner, while Enlightenment philosophers and revolutionary artists were forging ideas for the better future to come. We can almost picture Queen Marie Antoinette playing chess, covered with the bees’ work. Those people we see covered with honeycomb structures, making gallant gestures and adopting leisure postures, dressed with the official court costume that was soon to become a symbol of a guillotined system, appear as scraps from an ancient world that was disappearing and, indeed, it did eventually.

On the other hand, the work of the honeybees stands for what threatens to be extinct as well. It’s like one dinosaur facing another, soon-to-be extinct dinosaur. While this might seem a gloomy and depressing thought, honeycombs give a different life to these object; we feel the work of the bees being done in silence, in the dark. Such light, fussy creatures constructing and mending where there was no life. The end of the honeybee might mean the Apocalypse is coming but, in the meantime, Aganetha Dyck makes works that, in a playful way, confront us with the importance of their existence and its interrelation with ours. The business of beeing isn’t a light one after all! Go to www.aganethadyck.ca

The artist and the honeybees. The questionable lightness of bee-ing