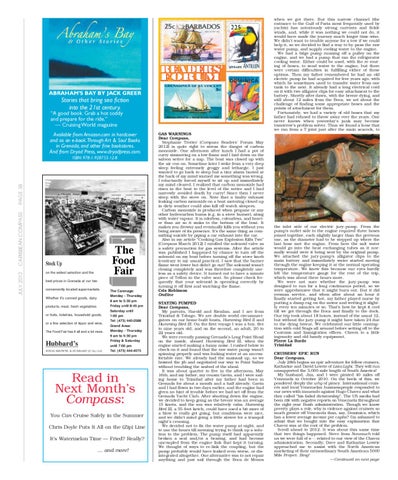 Stories that bring sea fiction into the 21st century. “A good book. Grab a hot toddy and prepare for the ride.” — Cruising World magazine Available from Amazon.com in hardcover and as an e-book.Through Art & Soul Books in Grenada, and other fine bookstores. And from Dryad Press, www.dryadpress.com.

Stock Up on the widest selection and the best prices in Grenada at our two conveniently located supermarkets. Whether it’s canned goods, dairy products, meat, fresh vegetables or fruits, toiletries, household goods, or a fine selection of liquor and wine, The Food Fair has it all and a lot more.

Read in Next Month’s Compass: You Can Cruise Safely in the Summer Chris Doyle Puts It All on the (Zip) Line It’s Watermelon Time — Fried? Really? … and more!

GAS WARNINGS Dear Compass, Stephanie Trotter (Compass Readers’ Forum May 2012) is quite right to stress the danger of carbon monoxide. One afternoon after lunch I had a pot of curry simmering on a low flame and I laid down on the saloon settee for a nap. The boat was closed up with the air-con on. Sometime later I woke from a very deep sleep feeling extremely groggy and lethargic. I just wanted to go back to sleep but a tiny alarm buried at the back of my mind warned me something was wrong. I reluctantly forced myself to sit up and immediately my mind cleared. I realized that carbon monoxide had risen in the boat to the level of the settee and I had narrowly avoided death by curry! Since then I never sleep with the stove on. Note that a faulty exhaust leaking carbon monoxide on a boat motoring closed up in dirty weather could also kill off-watch sleepers. Carbon monoxide is produced when propane or any other hydrocarbon burns (e.g. in a stove burner), along with water vapour. It is odorless, colourless, and heavier than air so it sinks to the bottom of the boat. It makes you drowsy and eventually kills you without you being aware of its presence. It’s the same thing as committing suicide by piping a car exhaust into the car. Also in my article “Cooking Gas Explosion Kills Two” (Compass March 2012) I extolled the solenoid valve as a safety precaution for gas systems. After the article was published I happened by chance to turn off the solenoid on my boat before turning off the stove knob (contrary to my usual practice). I saw that the burner flame went lower but didn’t go out! The solenoid wasn’t closing completely and was therefore completely useless as a safety device. It turned out to have a minute piece of Teflon in the valve seat. So please check frequently that your solenoid is operating correctly by turning it off first and watching the flame. Cris Robinson Ondine STAYING PUMPED Dear Compass, My parents, Harold and Kwailan, and I are from Trinidad & Tobago. We are double world circumnavigators on our home-built boats, Humming Bird II and Humming Bird III. On the first voyage I was a boy, five to nine years old, and on the second, an adult, 20 to 22 years old. We were recently passing Grenada’s Long Point Shoal on the inside, aboard Humming Bird III, when the engine started making a funny noise. I rushed below to check on it and found that the raw water pump wasn’t spinning properly and was leaking water at an uncomfortable rate. We already had the mainsail up, so we hoisted the jib and negotiated our way to Point Saline without troubling the seabed of the shoal. It was about quarter to five in the afternoon, May 16th, and my father, my cousin Gavin, and I were sailing home to Trinidad after my father had been in Grenada for about a month and a half already. Gavin and I had flown in two days earlier, and the engine had given no hint of trouble before we had set off from the Grenada Yacht Club. After shutting down the engine, we decided to keep going as the breeze was an average 15 knots, and the sea was relatively calm. Humming Bird III, a 55-foot ketch, could have used a bit more of a blow to really get going, but conditions were nice, and we didn’t mind going a little slower for a tranquil night’s crossing. We decided not to fix the water pump at night, and to use the hours till morning trying to think up a solution to the problem. The pump itself had apparently broken a seal and/or a bearing, and had become uncoupled from the engine link that kept it turning. We thought of ways to re-link the coupling, but the pump probably would have leaked even worse, or disintegrated altogether. One alternative was to not repair anything and just sail through the Boca de Monos

when we got there. But this narrow channel (the entrance to the Gulf of Paria most frequently used by yachts) has notoriously strong currents and fickle winds, and, while it was nothing we could not do, it would have made the journey much longer time-wise. We didn’t want to trouble anyone for a tow if we could help it, so we decided to find a way to by-pass the raw water pump, and supply cooling water to the engine. We had a bilge pump running off a pulley on the engine, and we had a pump that ran the refrigerator cooling water. Either could be used, with the re-routing of hoses, to send water to the engine, but there were certain difficulties in fulfilling either of these options. Then my father remembered he had an old electric pump he had acquired for free years ago, with which he sometimes used to transfer water from one tank to the next. It already had a long electrical cord on it with two alligator clips for easy attachment to the battery. Shortly after dawn, with the breeze dying, and still about 12 miles from the Boca, we set about the challenge of finding some appropriate hoses and the points of attachment for them. Fortunately, we had a variety of old hoses that my father had refused to throw away over the years. One never knows when yesterday’s junk may become tomorrow’s problem solver. Thus we found a hose that we ran from a T-joint just after the main seacock, to

the inlet side of our electric jury-pump. From the pump’s outlet side to the engine required three hoses joined together, each slightly larger than the previous one, as the diameter had to be stepped up where the last hose met the engine. From here the salt water would go into the heat exchanging tubes as it normally would were it being sent by the original pump. We attached the jury-pump’s alligator clips to the main battery and immediately water started moving through the engine keeping it at the normal operating temperature. We knew this because our eyes hardly left the temperature gauge for the rest of the trip, which was about three hours more. We were not sure whether the jury-pump was designed to run for a long continuous period, so we were apprehensive that it might burn out. But it did yeoman service, and when after about an hour it finally started getting hot, my father played nurse by putting a damp rag on the motor and wetting it slightly every ten minutes or so. That’s how he kept it cool till we got through the Boca and finally to the dock. Our trip took about 18 hours, instead of the usual 12, but without the jury-pump it might have taken 24 due to the dying breeze. We celebrated our little contraption with cold Stags all around before setting off to the Customs and Immigration offices. Cheers to a little ingenuity and old handy equipment. Pierre La Borde Trinidad CRUISERS’ EPIC RUN Dear Compass, July 28th begins an epic adventure for fellow cruisers, Katharine and David Lowrie of Lista Light. They will run unsupported the 5,000-mile length of South America! My husband, Jim, and I were pirated 40 miles off Venezuela in October 2010. On the heels of this, we pondered deeply the why of piracy. International cruisers and local Venezuelan businesspeople responded to our news with innuendo against Hugo Chavez and what they called “his failed dictatorship”. The US media had been rife with negative reports on Venezuela throughout the eight-year Bush administration. Though we know poverty plays a role, why is violence against cruisers so much greater off Venezuela than, say, Dominica, which has a lower average income per capita? I’m ashamed to admit that we bought into the easy explanation that Chavez was at the root of the problem. Scroll ahead to 2012. It was about this same time that two things happened. Steve from Nonesuch told us we were full of s--- related to our view of the Chavez administration. Secondly, Dave and Katharine Lowrie approached me to assist with the North American marketing of their extraordinary South American 5000 Mile Project. Bing! —Continued on next page 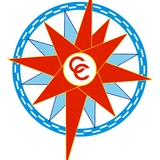 Welcome to Caribbean Compass, the most widely-read boating publication in the Caribbean! THE MOST NEWS YOU CAN USE - feature articles on cru...

Welcome to Caribbean Compass, the most widely-read boating publication in the Caribbean! THE MOST NEWS YOU CAN USE - feature articles on cru...