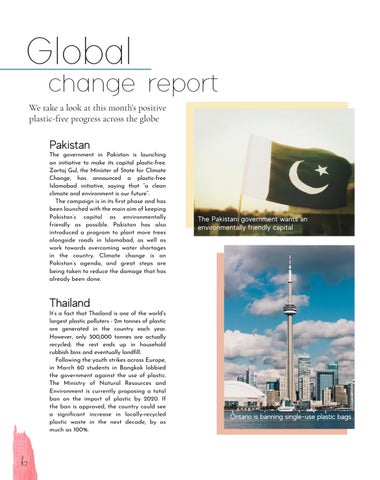 The government in Pakistan is launching an initiative to make its capital plastic-free. Zartaj Gul, the Minister of State for Climate Change, has announced a plastic-free Islamabad initiative, saying that “a clean climate and environment is our future”. The campaign is in its first phase and has been launched with the main aim of keeping Pakistan’s capital as environmentally friendly as possible. Pakistan has also introduced a program to plant more trees alongside roads in Islamabad, as well as work towards overcoming water shortages in the country. Climate change is on Pakistan’s agenda, and great steps are being taken to reduce the damage that has already been done.

It’s a fact that Thailand is one of the world’s largest plastic polluters - 2m tonnes of plastic are generated in the country each year. However, only 500,000 tonnes are actually recycled; the rest ends up in household rubbish bins and eventually landfill. Following the youth strikes across Europe, in March 60 students in Bangkok lobbied the government against the use of plastic. The Ministry of Natural Resources and Environment is currently proposing a total ban on the import of plastic by 2020. If the ban is approved, the country could see a significant increase in locally-recycled plastic waste in the next decade, by as much as 100%.

A magazine providing you with all the tips and tricks to help you live plastic-free. Featuring interesting think-pieces, interviews with people making a conscious difference and showing you how simple swaps can make big changes. In this issue, learn how to upcycle your style, discover plastic-free communities in the UK and revamp your office space. Created by MA Magazine Journalism students at Cardiff University in February 2019. 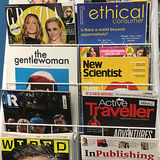