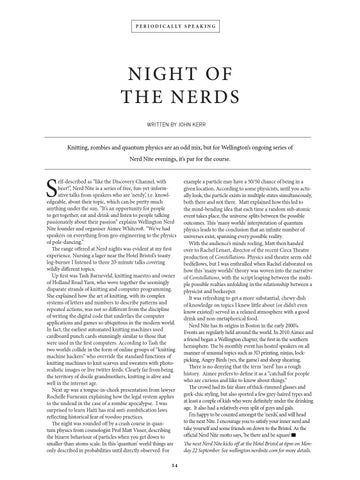 Knitting, zombies and quantum physics are an odd mix, but for Wellington’s ongoing series of Nerd Nite evenings, it’s par for the course.

elf-described as “like the Discovery Channel, with beer!”, Nerd Nite is a series of free, fun-yet-informative talks from speakers who are ‘nerdy’, i.e. knowledgeable, about their topic, which can be pretty much anything under the sun. “It’s an opportunity for people to get together, eat and drink and listen to people talking passionately about their passion” explains Wellington Nerd Nite founder and organiser Aimee Whitcroft. “We’ve had speakers on everything from geo-engineering to the physics of pole-dancing.” The range offered at Nerd nights was evident at my first experience. Nursing a lager near the Hotel Bristol’s toasty log-burner I listened to three 20-minute talks covering wildly different topics. Up first was Tash Barneveld, knitting maestro and owner of Holland Road Yarn, who wove together the seemingly disparate strands of knitting and computer programming. She explained how the art of knitting, with its complex systems of letters and numbers to describe patterns and repeated actions, was not so different from the discipline of writing the digital code that underlies the computer applications and games so ubiquitous in the modern world. In fact, the earliest automated knitting machines used cardboard punch cards stunningly similar to those that were used in the first computers. According to Tash the two worlds collide in the form of online groups of “knitting machine hackers” who override the standard functions of knitting machines to knit scarves and sweaters with photorealistic images or live twitter feeds. Clearly far from being the territory of docile grandmothers, knitting is alive and well in the internet age. Next up was a tongue-in-cheek presentation from lawyer Rochelle Furneaux explaining how the legal system applies to the undead in the case of a zombie apocalypse. I was surprised to learn Haiti has real anti-zombification laws reflecting historical fear of voodoo practices. The night was rounded off by a crash course in quantum physics from cosmologist Prof Matt Visser, describing the bizarre behaviour of particles when you get down to smaller-than-atoms scale. In this ‘quantum’ world things are only described in probabilities until directly observed. For 54

example a particle may have a 50/50 chance of being in a given location. According to some physicists, until you actually look, the particle exists in multiple states simultaneously, both there and not there. Matt explained how this led to the mind-bending idea that each time a random sub-atomic event takes place, the universe splits between the possible outcomes. This ‘many worlds’ interpretation of quantum physics leads to the conclusion that an infinite number of universes exist, spanning every possible reality. With the audience’s minds reeling, Matt then handed over to Rachel Lenart, director of the recent Circa Theatre production of Constellations. Physics and theatre seem odd bedfellows, but I was enthralled when Rachel elaborated on how this ‘many worlds’ theory was woven into the narrative of Constellations, with the script leaping between the multiple possible realties unfolding in the relationship between a physicist and beekeeper. It was refreshing to get a more substantial, chewy dish of knowledge on topics I knew little about (or didn’t even know existed) served in a relaxed atmosphere with a good drink and non-metaphorical food. Nerd Nite has its origins in Boston in the early 2000’s. Events are regularly held around the world. In 2010 Aimee and a friend began a Wellington chapter, the first in the southern hemisphere. The bi-monthly event has hosted speakers on all manner of unusual topics such as 3D printing, ninjas, lockpicking, Angry Birds (yes, the game) and sheep shearing. There is no denying that the term ‘nerd’ has a rough history. Aimee prefers to define it as a “catchall for people who are curious and like to know about things.” The crowd had its fair share of thick-rimmed glasses and geek-chic styling, but also sported a few grey-haired types and at least a couple of kids who were definitely under the drinking age. It also had a relatively even split of guys and gals. I’m happy to be counted amongst the ‘nerds’, and will head to the next Nite. I encourage you to satisfy your inner nerd and take yourself and some friends on down to the Bristol. As the official Nerd Nite motto says, ‘be there and be square’. The next Nerd Nite kicks off at the Hotel Bristol at 6pm on Monday 22 September. See wellington.nerdnite.com for more details. 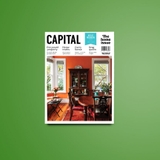