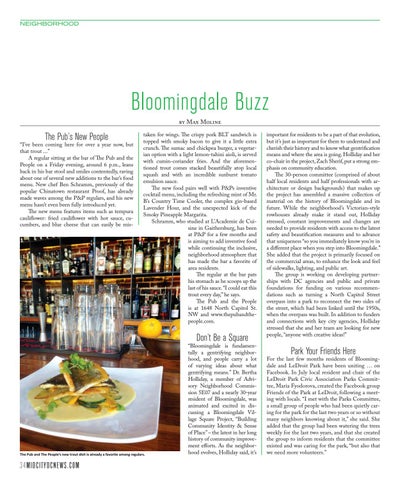 “I’ve been coming here for over a year now, but that trout ...” A regular sitting at the bar of The Pub and the People on a Friday evening, around 6 p.m., leans back in his bar stool and smiles contentedly, raving about one of several new additions to the bar’s food menu. New chef Ben Schramm, previously of the popular Chinatown restaurant Proof, has already made waves among the P&amp;P regulars, and his new menu hasn’t even been fully introduced yet. The new menu features items such as tempura cauliflower: fried cauliflower with hot sauce, cucumbers, and blue cheese that can easily be mis-

taken for wings. The crispy pork BLT sandwich is topped with smoky bacon to give it a little extra crunch. The sumac and chickpea burger, a vegetarian option with a light lemon-tahini aioli, is served with cumin-coriander fries. And the aforementioned trout comes stacked beautifully atop local squash and with an incredible sunburst tomato emulsion sauce. The new food pairs well with P&amp;Ps inventive cocktail menu, including the refreshing mint of Mr. B’s Country Time Cooler, the complex gin-based Lavender Hour, and the unexpected kick of the Smoky Pineapple Margarita. Schramm, who studied at L’Academie de Cuisine in Gaithersburg, has been at P&amp;P for a few months and is aiming to add inventive food while continuing the inclusive, neighborhood atmosphere that has made the bar a favorite of area residents. The regular at the bar pats his stomach as he scoops up the last of his sauce. “I could eat this trout every day,” he says. The Pub and the People is at 1648 North Capitol St. NW and www.thepubandthepeople.com.

Don’t Be a Square

The Pub and The People’s new trout dish is already a favorite among regulars.

“Bloomingdale is fundamentally a gentrifying neighborhood, and people carry a lot of varying ideas about what gentrifying means.” Dr. Bertha Holliday, a member of Advisory Neighborhood Commission 5E07 and a nearly 30-year resident of Bloomingdale, was animated and excited in discussing a Bloomingdale Village Square Project, “Building Community Identity &amp; Sense of Place” – the latest in her long history of community improvement efforts. As the neighborhood evolves, Holliday said, it’s

important for residents to be a part of that evolution, but it’s just as important for them to understand and cherish their history and to know what gentrification means and where the area is going. Holliday and her co-chair in the project, Zach Sherif, put a strong emphasis on community education. The 30-person committee (comprised of about half local residents and half professionals with architecture or design backgrounds) that makes up the project has assembled a massive collection of material on the history of Bloomingdale and its future. While the neighborhood’s Victorian-style rowhouses already make it stand out, Holliday stressed, constant improvements and changes are needed to provide residents with access to the latest safety and beautification measures and to advance that uniqueness “so you immediately know you’re in a different place when you step into Bloomingdale.” She added that the project is primarily focused on the commercial areas, to enhance the look and feel of sidewalks, lighting, and public art. The group is working on developing partnerships with DC agencies and public and private foundations for funding on various recommendations such as turning a North Capitol Street overpass into a park to reconnect the two sides of the street, which had been linked until the 1950s, when the overpass was built. In addition to funders and connections with key city agencies, Holliday stressed that she and her team are looking for new people, “anyone with creative ideas!”

For the last few months residents of Bloomingdale and LeDroit Park have been uniting … on Facebook. In July local resident and chair of the LeDroit Park Civic Association Parks Committee, Maria Fyodorova, created the Facebook group Friends of the Park at LeDroit, following a meeting with locals. “I met with the Parks Committee, a small group of people who had been quietly caring for the park for the last two years or so without many neighbors knowing about it,” she said. She added that the group had been watering the trees weekly for the last two years, and that she created the group to inform residents that the committee existed and was caring for the park, “but also that we need more volunteers.”

News from the uptown and Northwest DC areas of Washington, DC