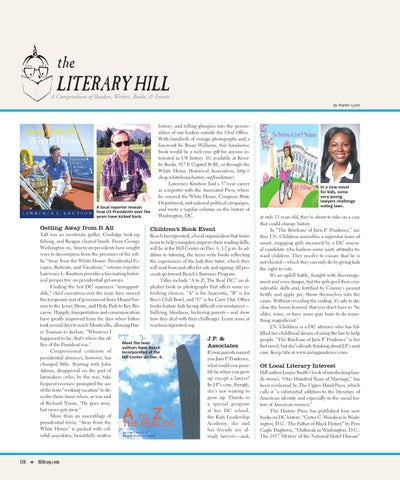 A local reporter reveals how US Presidents over the years have kicked back.

Getting Away from It All

history, and telling glimpses into the personalities of our leaders outside the Oval Office. With hundreds of vintage photographs and a foreword by Brian Williams, this handsome book would be a welcome gift for anyone interested in US history. It’s available at Riverby Books, 417 E Capitol St SE, or through the White House Historical Association, http:// shop.whitehousehistory.org/bookstore/. Lawrence Knutson had a 37-year career as a reporter with the Associated Press, where he covered the White House, Congress, State Department, and national political campaigns, and wrote a regular column on the history of Washington, DC.

Taft was an inveterate golfer, Coolidge took up Reach Incorporated, a local organization that trains fishing, and Reagan cleared brush. From George teens to help youngsters improve their reading skills, Washington on, American presidents have sought will be at the Hill Center on Dec. 6, 1-2 p.m. In adways to decompress from the pressures of the job. dition to tutoring, the teens write books reflecting In “Away from the White House: Presidential Esthe experiences of the kids they tutor, which they capes, Retreats, and Vacations,” veteran reporter will read from and offer for sale and signing. All proLawrence L. Knutson provides a fascinating historceeds go toward Reach’s Summer Program. ical perspective on presidential get-aways. Titles include “A to Z: The Real DC,” an alFinding the hot DC summers “unsupportphabet book in photographs that offers some reable,” chief executives over the years have moved freshing choices: “A” is for Anacostia, “B” is for the temporary seat of government from Mount VerBen’s Chili Bowl, and “C” is for Carry Out. Other non to the Jersey Shore, and Hyde Park to Key Bisbooks feature kids facing difficult circumstances— bullying, blindness, bickering parents—and show cayne. Happily, transportation and communication how they deal with their challenges. Learn more at have greatly improved from the days when letters reachincorporated.org. took several days to reach Monticello, allowing Harry Truman to declare, “Wherever I happened to be, that’s where the ofJ.P. &amp; Meet the teen fice of the President was.” Associates authors from Reach Congressional criticism of Incorporated at the If your parents named Hill Center on Dec. 6. presidential absences, however, has you Juris P. Prudence, changed little. Starting with John what could you possiAdams, disapproval on the part of bly be when you grew lawmakers (who, by the way, take up except a lawyer? frequent recesses) prompted the use In J.P.’s case, though, of the term “working vacation” to deshe’s not waiting to scribe those times when, as was said grow up. Thanks to of Richard Nixon, “He goes away, a special program but never gets away.” at her DC school, More than an assemblage of the Kids Leadership presidential trivia, “Away from the Academy, she and White House” is packed with colher friends are alorful anecdotes, beautifully written ready lawyers—and,

In a new novel for kids, some very young lawyers challenge voting laws.

at only 11 years old, they’re about to take on a case that could change history. In “The Briefcase of Juris P. Prudence,” author J.N. Childress assembles a superstar team of smart, engaging girls incensed by a DC mayoral candidate who harbors some nasty attitudes toward children. They resolve to ensure that he is not elected—which they can only do by giving kids the right to vote. It’s an uphill battle, fraught with discouragement and even danger, but the girls pool their considerable skills and, fortified by Granny’s peanut brittle and apple pie, throw themselves into the cause. Without revealing the ending, it’s safe to disclose the lesson learned: that you don’t have to “be older, wiser, or have more gray hairs to do something magnificent.” J.N. Childress is a DC attorney who has fulfilled her childhood dream of using the law to help people. “The Briefcase of Juris P. Prudence” is her first novel, but she’s already thinking about J.P.’s next case. Keep tabs at www.jurispprudence.com.

Of Local Literary Interest Hill author Louise Smith’s book of interlocking family stories, “One Hundred Years of Marriage,” has been rereleased by The Upper Hand Press, which calls it “a substantial addition to the literature of American identity and especially to the social history of American women.” The History Press has published four new books on DC history: “Carter G. Woodson in Washington, D.C.: The Father of Black History” by Pero Gaglo Dagbovie, “Outbreak in Washington, D.C.: The 1857 Mystery of the National Hotel Disease”