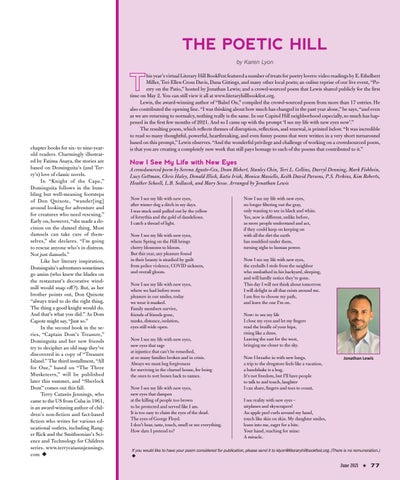 THE POETIC HILL by Karen Lyon

T chapter books for six- to nine-yearold readers. Charmingly illustrated by Fatima Anaya, the stories are based on Dominguita’s (and Terry’s) love of classic novels. In “Knight of the Cape,” Dominguita follows in the bumbling but well-meaning footsteps of Don Quixote, “wander[ing] around looking for adventure and for creatures who need rescuing.” Early on, however, “she made a decision on the damsel thing. Most damsels can take care of themselves,” she declares. “I’m going to rescue anyone who’s in distress. Not just damsels.” Like her literary inspiration, Dominguita’s adventures sometimes go amiss (who knew the blades on the restaurant’s decorative windmill would snap off ?). But, as her brother points out, Don Quixote “always tried to do the right thing. The thing a good knight would do. And that’s what you did.” As Dom Capote might say, “Just so.” In the second book in the series, “Captain Dom’s Treasure,” Dominguita and her new friends try to decipher an old map they’ve discovered in a copy of “Treasure Island.” The third installment, “All for One,” based on “The Three Musketeers,” will be published later this summer, and “Sherlock Dom” comes out this fall. Terry Catasús Jennings, who came to the US from Cuba in 1961, is an award-winning author of children’s non-fiction and fact-based fiction who writes for various educational outlets, including Ranger Rick and the Smithsonian’s Science and Technology for Children series. www.terrycatasusjennings. com u

his year’s virtual Literary Hill BookFest featured a number of treats for poetry lovers: video readings by E. Ethelbert Miller, Teri Ellen Cross Davis, Dana Gittings, and many other local poets; an online reprise of our live event, “Poetry on the Patio,” hosted by Jonathan Lewis; and a crowd-sourced poem that Lewis shared publicly for the first time on May 2. You can still view it all at www.literaryhillbookfest.org. Lewis, the award-winning author of “Babel On,” compiled the crowd-sourced poem from more than 17 entries. He also contributed the opening line. “I was thinking about how much has changed in the past year alone,” he says, “and even as we are returning to normalcy, nothing really is the same. In our Capitol Hill neighborhood especially, so much has happened in the first few months of 2021. And so I came up with the prompt ‘I see my life with new eyes now’.” The resulting poem, which reflects themes of disruption, reflection, and renewal, is printed below. “It was incredible to read so many thoughtful, powerful, heartbreaking, and even funny poems that were written in a very short turnaround based on this prompt,” Lewis observes. “And the wonderful privilege and challenge of working on a crowdsourced poem, is that you are creating a completely new work that still pays homage to each of the poems that contributed to it.”

Now I see my life with new eyes, no longer filtering out the gray, only wanting to see in black and white. Yes, now is different, unlike before, as more people understand and act, if they could keep on keeping on with all the dirt the earth has muddied under them, turning sighs to human power. Now I see my life with new eyes, the eyeballs I stole from the neighbor who sunbathed in his backyard, sleeping, and will hardly notice they’re gone. This day I will not think about tomorrow. I will delight in all that exists around me. I am free to choose my path, and leave the one I’m on. Now: to see my life I close my eyes and let my fingers read the braille of your hips, rising like a dune. Leaving the east for the west, bringing me closer to the sky. Now I breathe in with new lungs, a trip to the drugstore feels like a vacation, a handshake is a hug. It’s not freedom, but I’ll have people to talk to and touch, laughter I can share, fingers and toes to count.

I see reality with new eyes – airplanes and skyscrapers! An apple peel curls around my hand, touch like skin on skin. My daughter smiles, leans into me, eager for a bite. Your hand, reaching for mine: A miracle.

If you would like to have your poem considered for publication, please send it to klyon@literaryhillbookfest.org. (There is no remuneration.) u