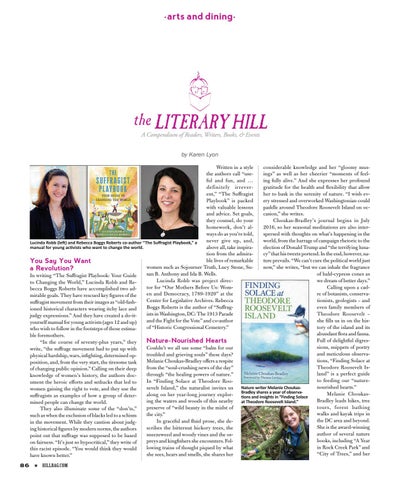 the LITERARY HILL A Compendium of Readers, Writers, Books, &amp; Events by Karen Lyon Written in a style considerable knowledge and her “gloomy musthe authors call “useings” as well as her cheerier “moments of feelful and fun, and … ing fully alive.” And she expresses her profound definitely irrevergratitude for the health and flexibility that allow ent,” “The Suffragist her to bask in the serenity of nature. “I wish evPlaybook” is packed ery stressed and overworked Washingtonian could with valuable lessons paddle around Theodore Roosevelt Island on ocand advice. Set goals, casion,” she writes. they counsel, do your Choukas-Bradley’s journal begins in July homework, don’t al2016, so her seasonal meditations are also interways do as you’re told, spersed with thoughts on what’s happening in the never give up, and, world, from the barrage of campaign rhetoric to the Lucinda Robb (left) and Rebecca Boggs Roberts co-author “The Suffragist Playbook,” a above all, take inspiraelection of Donald Trump and “the terrifying lunamanual for young activists who want to change the world. tion from the admiracy” that his tweets portend. In the end, however, nable lives of remarkable ture prevails. “We can’t cure the political world just You Say You Want women such as Sojourner Truth, Lucy Stone, Sunow,” she writes, “but we can inhale the fragrance a Revolution? san B. Anthony and Ida B. Wells. of bald-cypress cones as In writing “The Suffragist Playbook: Your Guide Lucinda Robb was project direcwe dream of better days.” to Changing the World,” Lucinda Robb and Retor for “Our Mothers Before Us: WomCalling upon a cadbecca Boggs Roberts have accomplished two aden and Democracy, 1789-1920” at the re of botanists, conservamirable goals. They have rescued key figures of the Center for Legislative Archives. Rebecca tionists, geologists – and suffragist movement from their images as “old-fashBoggs Roberts is the author of “Suffrageven family members of ioned historical characters wearing itchy lace and ists in Washington, DC: The 1913 Parade Theodore Roosevelt – judgy expressions.” And they have created a do-itand the Fight for the Vote” and co-author she fills us in on the hisyourself manual for young activists (ages 12 and up) of “Historic Congressional Cemetery.” tory of the island and its who wish to follow in the footsteps of those estimaabundant flora and fauna. ble foremothers. Full of delightful digresNature-Nourished Hearts “In the course of seventy-plus years,” they sions, snippets of poetry Couldn’t we all use some “balm for our write, “the suffrage movement had to put up with and meticulous observatroubled and grieving souls” these days? physical hardship, wars, infighting, determined options, “Finding Solace at Melanie Choukas-Bradley offers a respite position, and, from the very start, the tiresome task Theodore Roosevelt Isfrom the “soul-crushing news of the day” of changing public opinion.” Calling on their deep land” is a perfect guide through “the healing powers of nature.” knowledge of women’s history, the authors docto feeding our “natureIn “Finding Solace at Theodore Rooument the heroic efforts and setbacks that led to nourished hearts.” sevelt Island,” the naturalist invites us Nature writer Melanie Choukaswomen gaining the right to vote, and they use the Bradley shares a year of observaMelanie Choukasalong on her year-long journey explor- tions and insights in “Finding Solace suffragists as examples of how a group of deterBradley leads hikes, tree ing the waters and woods of this nearby at Theodore Roosevelt Island.” mined people can change the world. tours, forest bathing preserve of “wild beauty in the midst of They also illuminate some of the “don’ts,” walks and kayak trips in the city.” such as when the exclusion of blacks led to a schism the DC area and beyond. In graceful and fluid prose, she dein the movement. While they caution about judgShe is the award-winning scribes the bitternut hickory trees, the ing historical figures by modern norms, the authors author of several nature sneezeweed and woody vines and the ospoint out that suffrage was supposed to be based books, including “A Year preys and kingfishers she encounters. Folon fairness. “It’s just so hypocritical,” they write of in Rock Creek Park” and lowing trains of thought piqued by what this racist episode. “You would think they would “City of Trees,” and her she sees, hears and smells, she shares her have known better.” 86 H HILLRAG.COM