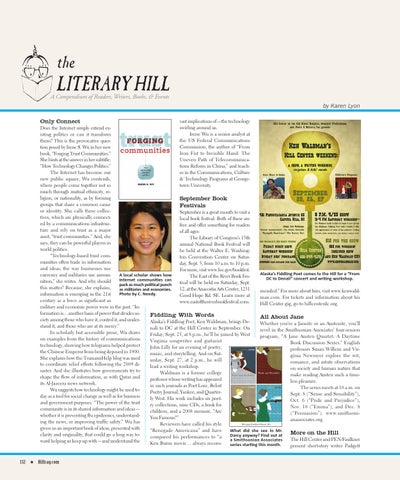 by Karen Lyon Only Connect

vast implications of—the technology swirling around us. Does the Internet simply extend exIrene Wu is a senior analyst at isting politics or can it transform the US Federal Communications them? This is the provocative quesCommission, the author of “From tion posed by Irene S. Wu in her new Iron Fist to Invisible Hand: The book, “Forging Trust Communities.” Uneven Path of TelecommunicaShe hints at the answer in her subtitle: tions Reform in China,” and teach“How Technology Changes Politics.” es in the Communications, Culture The Internet has become our &amp; Technology Programs at Georgenew public square, Wu contends, town University. where people come together not so much through mutual ethnicity, religion, or nationality, as by forming September Book groups that share a common cause Festivals or identity. She calls these collecSeptember is a great month to visit a tives, which are physically connectlocal book festival. Both of these are ed by a communications infrastrucfree and offer something for readers ture and rely on trust as a major of all ages: asset, “trust communities.” And, she The Library of Congress’s 15th says, they can be powerful players in annual National Book Festival will world politics. be held at the Walter E. Washing“Technology-based trust comton Convention Center on Saturmunities often trade in information day, Sept. 5, from 10 a.m. to 10 p.m. and ideas, the way businesses use For more, visit www.loc.gov/bookfest. Alaska’s Fiddling Poet comes to the Hill for a “From currency and militaries use ammuA local scholar shows how The East of the River Book FesDC to Denali” concert and writing workshop. Internet communiti es can nition,” she writes. And why should tival will be held on Saturday, Sept. pack as much political punch this matter? Because, she explains, 12, at the Anacostia Arts Center, 1231 as militaries and economies. mended.” For more about him, visit www.kenwaldPhoto by C. Needy. information is emerging in the 21st Good Hope Rd. SE. Learn more at man.com. For tickets and information about his century as a force as significant as www.eastoftheriverbookfestival.com. Hill Center gig, go to hillcenterdc.org. military and economic power were in the past. “Information is…another basis of power that divides soFiddling With Words All About Jane ciety among those who have it, control it, and underAlaska’s Fiddling Poet, Ken Waldman, brings DeWhether you’re a Janeite or an Austenite, you’ll stand it, and those who are at its mercy.” nali to DC at the Hill Center in September. On revel in the Smithsonian Associates’ four-session In scholarly but accessible prose, Wu draws Friday, Sept. 25, at 8 p.m., he’ll be joined by West program, “A Jane Austen Quartet: A Daytime on examples from the history of communications Virginia songwriter and guitarist Book Discussion Series.” English technology, showing how telegrams helped protect John Lilly for an evening of poetry, professors Susan Willens and Virthe Chinese Emperor from being deposed in 1900. music, and storytelling. And on Satginia Newmyer explore the wit, She explains how the TsunamiHelp blog was used urday, Sept. 27, at 2 p.m., he will romance, and astute observations to coordinate relief efforts following the 2004 dilead a writing workshop. on society and human nature that saster. And she illustrates how governments try to Waldman is a former college make reading Austen such a timeshape the flow of information, as with Qatar and professor whose writing has appeared less pleasure. its Al-Jazeera news network. in such journals as Poet Lore, Beloit The series meets at 10 a.m. on Wu suggests how technology might be used toPoetry Journal, Yankee, and QuarterSept. 8 (“Sense and Sensibility”), day as a tool for social change as well as for business ly West. His work includes six poetOct. 6 (“Pride and Prejudice”), and government purposes. “The power of the trust ry collections, nine CDs, a book for Nov. 10 (”Emma”), and Dec. 8 community is in its shared information and ideas— children, and a 2008 memoir, “Are (“Persuasion”). www.smithsoniwhether it is preventing flu epidemics, understandYou Famous?” anassociates.org. ing the news, or improving traffic safety.” Wu has Reviewers have called his style given us an important book of ideas, presented with “Renegade Americana” and have What did she see in Mr. More on the Hill clarity and originality, that could go a long way toDarcy anyway? Find out at compared his performances to “a The Hill Center and PEN/Faulkner a Smithsonian Associates ward helping us keep up with—and understand the Ken Burns movie… always recomseries starting this month. present short-story writer Padgett 132 H Hillrag.com