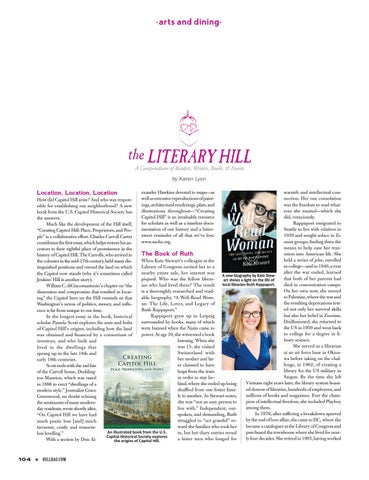 exander Hawkins devoted to maps—as warmth and intellectual conwell as extensive reproductions of paintnection. Her one consolation How did Capitol Hill arise? And who was responings, architectural renderings, plats, and was the freedom to read whatsible for establishing our neighborhood? A new illustrations throughout—“Creating ever she wanted—which she book from the U.S. Capitol Historical Society has Capitol Hill” is an invaluable resource did, voraciously. the answers. for scholars as well as a timeless docuRappaport emigrated to Much like the development of the Hill itself, mentation of our history and a bitterSeattle to live with relatives in “Creating Capitol Hill: Place, Proprietors, and Peosweet reminder of all that we’ve lost. 1939 and sought solace in Ziple” is a collaborative effort. Charles Carroll Carter www.uschs.org. onist groups, finding there the contributes the first essay, which helps restore his anmeans to help ease her trancestors to their rightful place of prominence in the sition into American life. She The Book of Ruth history of Capitol Hill. The Carrolls, who arrived in held a series of jobs, enrolled When Kate Stewart’s colleague at the the colonies in the mid-17th century, held many disin college—and in 1946, a year Library of Congress invited her to a tinguished positions and owned the land on which after the war ended, learned nearby estate sale, her interest was the Capitol now stands (why it’s sometimes called A new biography by Kate Stewthat both of her parents had piqued. Who was the fellow librarJenkins’ Hill is another story). art shines a light on the life of local librarian Ruth Rappaport. died in concentration camps. ian who had lived there? The result William C. diGiacomantonio’s chapter on “the On her own now, she moved is a thoroughly researched and readdissension and compromise that resulted in locatto Palestine, where the war and able biography, “A Well-Read Woming” the Capitol here on the Hill reminds us that the resulting deprivations testan: The Life, Loves, and Legacy of Washington’s nexus of politics, money, and influed not only her survival skills Ruth Rappaport.” ence is far from unique to our time. but also her belief in Zionism. Rappaport grew up in Leipzig In the longest essay in the book, historical Disillusioned, she returned to surrounded by books, many of which scholar Pamela Scott explores the nuts and bolts the US in 1950 and went back were banned when the Nazis came to of Capitol Hill’s origins, including how the land to college for a degree in lipower. At age 10, she witnessed a book was obtained and financed by a consortium of brary science. burning. When she investors, and who built and She served as a librarian was 15, she visited lived in the dwellings that at an air force base in OkinaSwitzerland with sprang up in the late 18th and wa before taking on the chalher mother and latearly 19th centuries. lenge, in 1962, of creating a er claimed to have Scott ends with the sad fate library for the US military in leapt from the train of the Carroll home, DuddingSaigon. By the time she left in order to stay beton Mansion, which was razed Vietnam eight years later, the library system boasthind, where she ended up being in 1886 to erect “dwellings of a ed dozens of libraries, hundreds of employees, and shuffled from one foster famimodern style.” Journalist Grace millions of books and magazines. Ever the chamly to another. As Stewart notes, Greenwood, no doubt echoing pion of intellectual freedom, she included Playboy she was “not an easy person to the sentiments of many modernamong them. live with.” Independent, outday residents, wrote shortly after, In 1970, after suffering a breakdown spurred spoken, and demanding, Ruth “On Capitol Hill we have had by the end of love affair, she came to DC, where she struggled to “act grateful” tomuch poetic loss [and] much became a cataloguer at the Library of Congress and ward the families who took her tiresome, costly and remorseAn illustrated book from the U.S. purchased the townhouse where she lived for nearin, but her diary entries reveal less levelling.” Capitol Historical Society explores ly four decades. She retired in 1993, having worked a bitter teen who longed for With a section by Don Althe origins of Capitol Hill.