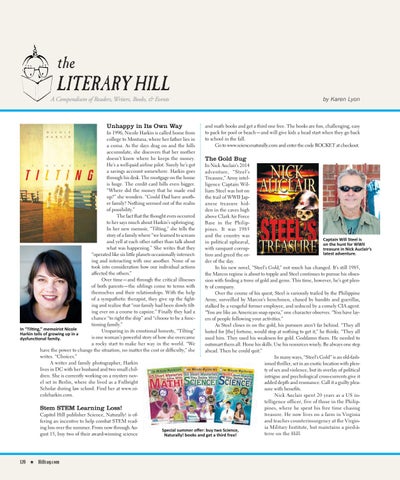 Unhappy in Its Own Way In 1996, Nicole Harkin is called home from college to Montana, where her father lies in a coma. As the days drag on and the bills accumulate, she discovers that her mother doesn’t know where he keeps the money. He’s a well-paid airline pilot. Surely he’s got a savings account somewhere. Harkin goes through his desk. The mortgage on the house is huge. The credit card bills even bigger. “Where did the money that he made end up?” she wonders. “Could Dad have another family? Nothing seemed out of the realm of possibility.” The fact that the thought even occurred to her says much about Harkin’s upbringing. In her new memoir, “Tilting,” she tells the story of a family where “we learned to scream and yell at each other rather than talk about what was happening.” She writes that they “operated like six little planets occasionally intersecting and interacting with one another. None of us took into consideration how our individual actions affected the others.” Over time—and through the critical illnesses of both parents—the siblings come to terms with themselves and their relationships. With the help of a sympathetic therapist, they give up the fighting and realize that “our family had been slowly tilting ever on a course to capsize.” Finally they had a chance “to right the ship” and “choose to be a functioning family.” In “Tilting,” memoirist Nicole Unsparing in its emotional honesty, “Tilting” Harkin tells of growing up in a is one woman’s powerful story of how she overcame dysfunctional family. a rocky start to make her way in the world. “We have the power to change the situation, no matter the cost or difficulty,” she writes. “Choices.” A writer and family photographer, Harkin lives in DC with her husband and two small children. She is currently working on a mystery novel set in Berlin, where she lived as a Fulbright Scholar during law school. Find her at www.nicoleharkin.com.

and math books and get a third one free. The books are fun, challenging, easy to pack for pool or beach—and will give kids a head start when they go back to school in the fall. Go to www.sciencenaturally.com and enter the code ROCKET at checkout.

In Nick Auclair’s 2014 adventure, “Steel’s Treasure,” Army intelligence Captain William Steel was hot on the trail of WWII Japanese treasure hidden in the caves high above Clark Air Force Base in the Philippines. It was 1985 and the country was Captain Will Steel is in political upheaval, on the hunt for WWII with rampant corruptreasure in Nick Auclair’s latest adventure. tion and greed the order of the day. In his new novel, “Steel’s Gold,” not much has changed. It’s still 1985, the Marcos regime is about to topple and Steel continues to pursue his obsession with finding a trove of gold and gems. This time, however, he’s got plenty of company. Over the course of his quest, Steel is variously trailed by the Philippine Army, surveilled by Marcos’s henchmen, chased by bandits and guerillas, stalked by a vengeful former employee, and seduced by a comely CIA agent. “You are like an American soap opera,” one character observes. “You have layers of people following your activities.” As Steel closes in on the gold, his pursuers aren’t far behind. “They all lusted for [the] fortune, would stop at nothing to get it,” he thinks. “They all used him. They used his weakness for gold. Goddamn them. He needed to outsmart them all. Hone his skills. Use his resources wisely. Be always one step ahead. Then he could quit.” In many ways, “Steel’s Gold” is an old-fashioned thriller, set in an exotic location with plenty of sex and violence, but its overlay of political intrigue and psychological cross-currents give it added depth and resonance. Call it a guilty pleasure with benefits. Nick Auclair spent 20 years as a US intelligence officer, five of those in the Philippines, where he spent his free time chasing treasure. He now lives on a farm in Virginia and teaches counterinsurgency at the Virginia Military Institute, but maintains a pied-àSpecial summer offer: buy two Science, terre on the Hill. Naturally! books and get a third free!