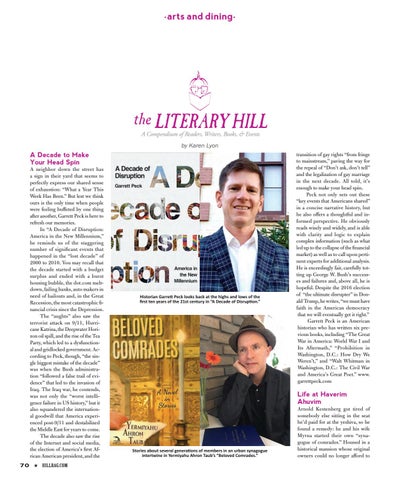 A Decade to Make Your Head Spin A neighbor down the street has a sign in their yard that seems to perfectly express our shared sense of exhaustion: “What a Year This Week Has Been.” But lest we think ours is the only time when people were feeling buffeted by one thing after another, Garrett Peck is here to refresh our memories. In “A Decade of Disruption: America in the New Millennium,” he reminds us of the staggering number of significant events that happened in the “lost decade” of 2000 to 2010. You may recall that the decade started with a budget surplus and ended with a burst housing bubble, the dot.com meltdown, failing banks, auto makers in need of bailouts and, in the Great Recession, the most catastrophic financial crisis since the Depression. The “aughts” also saw the terrorist attack on 9/11, Hurricane Katrina, the Deepwater Horizon oil spill, and the rise of the Tea Party, which led to a dysfunctional and gridlocked government. According to Peck, though, “the single biggest mistake of the decade” was when the Bush administration “followed a false trail of evidence” that led to the invasion of Iraq. The Iraq war, he contends, was not only the “worst intelligence failure in US history,” but it also squandered the international goodwill that America experienced post-9/11 and destabilized the Middle East for years to come. The decade also saw the rise of the Internet and social media, the election of America’s first African American president, and the 70 H HILLRAG.COM

Historian Garrett Peck looks back at the highs and lows of the first ten years of the 21st century in “A Decade of Disruption.”

transition of gay rights “from fringe to mainstream,” paving the way for the repeal of “Don’t ask, don’t tell” and the legalization of gay marriage in the next decade. All told, it’s enough to make your head spin. Peck not only sets out these “key events that Americans shared” in a concise narrative history, but he also offers a thoughtful and informed perspective. He obviously reads wisely and widely, and is able with clarity and logic to explain complex information (such as what led up to the collapse of the financial market) as well as to call upon pertinent experts for additional analysis. He is exceedingly fair, carefully totting up George W. Bush’s successes and failures and, above all, he is hopeful. Despite the 2016 election of “the ultimate disrupter” in Donald Trump, he writes, “we must have faith in the American democracy that we will eventually get it right.” Garrett Peck is an American historian who has written six previous books, including “The Great War in America: World War I and Its Aftermath,” “Prohibition in Washington, D.C.: How Dry We Weren’t,” and “Walt Whitman in Washington, D.C.: The Civil War and America’s Great Poet.” www. garrettpeck.com

Arnold Kestenberg got tired of somebody else sitting in the seat he’d paid for at the yeshiva, so he found a remedy: he and his wife Myrna started their own “synagogue of comrades.” Housed in a historical mansion whose original owners could no longer afford to