East of the River Magazine September 2016 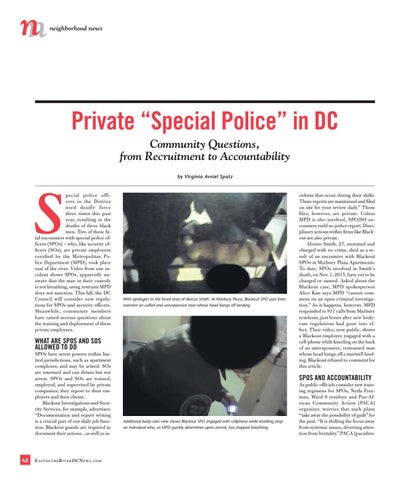 pecial police officers in the District used deadly force three times this past year, resulting in the deaths of three black men. Two of these fatal encounters with special police officers (SPOs) – who, like security officers (SOs), are private employees certified by the Metropolitan Police Department (MPD), took place east of the river. Video from one incident shows SPOs, apparently unaware that the man in their custody is not breathing, using restraint MPD does not sanction. This fall, the DC Council will consider new regulations for SPOs and security officers. Meanwhile, community members have raised serious questions about the training and deployment of these private employees.

With apologies to the loved ones of Alonzo Smith: At Marbury Plaza, Blackout SPO uses knee restraint on cuffed and unresponsive man whose head hangs off landing.

WHAT ARE SPOS AND SOS ALLOWED TO DO

SPOs have arrest powers within limited jurisdictions, such as apartment complexes, and may be armed. SOs are unarmed and can detain but not arrest. SPOs and SOs are trained, employed, and supervised by private companies; they report to their employers and their clients. Blackout Investigations and Security Services, for example, advertises: “Documentation and report writing is a crucial part of our daily job function. Blackout guards are required to document their actions...as well as in-

cidents that occur during their shifts. These reports are maintained and filed on site for your review daily.” Those files, however, are private. Unless MPD is also involved, SPO/SO encounters yield no police report. Disciplinary actions within firms like Blackout are also private. Alonzo Smith, 27, unarmed and charged with no crime, died as a result of an encounter with Blackout SPOs at Marbury Plaza Apartments. To date, SPOs involved in Smith’s death, on Nov. 1, 2015, have yet to be charged or named. Asked about the Blackout case, MPD spokesperson Alice Kim says MPD “cannot comment on an open criminal investigation.” As it happens, however, MPD responded to 911 calls from Marbury residents, just hours after new bodycam regulations had gone into effect. Their video, now public, shows a Blackout employee engaged with a cell-phone while kneeling on the back of an unresponsive, restrained man whose head hangs off a stairwell landing. Blackout refused to comment for this article.

Additional body-cam view shows Blackout SPO engaged with cellphone while kneeling atop an individual who, as MPD quickly determines upon arrival, has stopped breathing.

As public officials consider new training regimens for SPOs, Netfa Freeman, Ward 8 resident and Pan-African Community Action (PACA) organizer, worries that such plans “take away the possibility of guilt” for the past. “It is shifting the focus away from systemic issues, diverting attention from brutality.” PACA (pacadmv.

East of the River Magazine September 2016